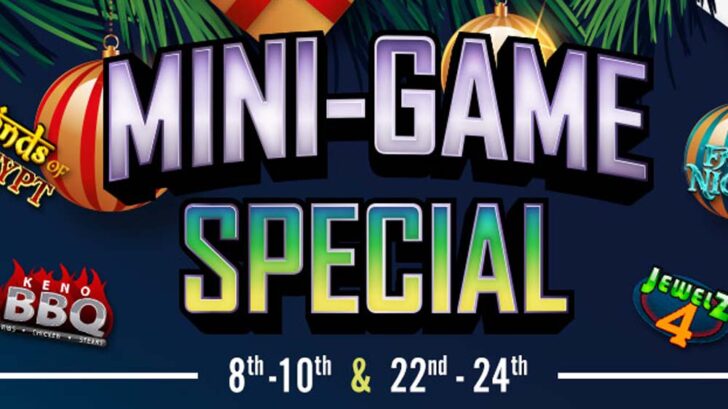 As the nights draw in, settle down, get cozy and join Vegas Crest Casino‘s Mini-Game Special in the run-up to Christmas this December. In detail, head to the Bingo rooms and you just might be lucky enough to get your hands on the top cash prize of $300 playing the fun-filled mini slot games. Surely, the Mini-game special promo could really bring you some festive cheer.

So, play the selected mini-games and add some cheer to your holidays with a prize of $300!

To clarify, the winners of the tournaments will be decided on the basis of the best-equalized win over five rounds. So, this can only mean one thing – get playing! Moreover, apart from the first-place prize of $300 in cash, players coming in second to tenth place will also win a prize – given as a casino bonus.

So, if you fancy a little something just to give your December that extra bit of sparkle, why not come over to our Bingo Rooms and join in with our Mini-Game Special? So, count down to Christmas in the best possible way – with the chance of getting your hands on $300 in cash.

So, note that you must’ve made at least 1 deposit in the previous 7 days to participate in the tournament. Also, note that in the case of a tie, the higher prize will be awarded to the player who achieved the specified ranking first.

Notably, the Tournament is based on the highest equalized win over 5 rounds while playing the selected mini-games within the bingo rooms.

Additionally, to learn about the advantages of this site, don’t forget to check our latest review about Vegas Crest Casino.