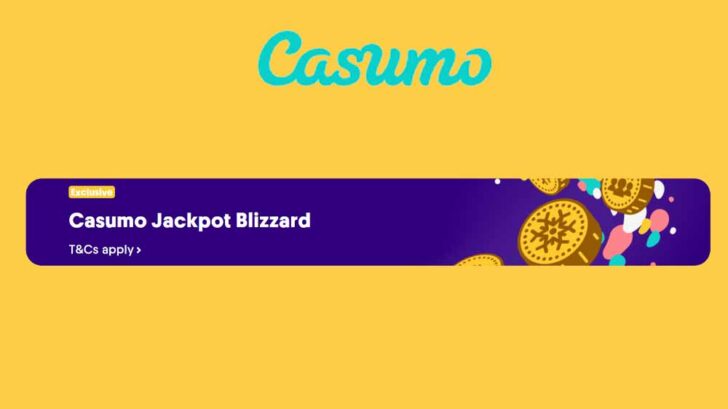 Here’s our friendly reminder for you to try out the Jackpot Blizzard promotion which is currently running at Casumo Casino. The online gambling site has done well to keep all of us entertained up until the eve of Christmas. Let’s jump straight into the action and find out what this is all about.

If you want to have a little more money in your pockets come Christmas, you’ll have to play at Casumo Casino. That’s right, by simply playing, and spinning reels, you’ll be entered into the Jackpot Blizzard promotion which has got three separate prizes. Namely, they’re called the Mini, Major and Mega jackpots which are all up for grabs.

Up until the 16th of December, Casumo Casino is running a promotion for all customers. That’s right, everyone is welcome to try and compete for a jackpot prize! All you’ve got to do is show the online gambling site that you’re an active customer by spinning reels on popular video slots. You can find out which games are the ones you’ll need to play to enter the contention for the jackpot. That can be done by heading over to Casumo and reading up about the Jackpot Blizzard promotion in their news.

And that’s not all what is up. If you want, you can also have exclusive access to an awesome video slot which is about to cause havoc in the online world of internet gambling. Golden Osiris is a Play’n Go video game which is as highly anticipated as all of the best games in the industry. You’ve got the likes of a Cluster Pays system, hidden wilds, multipliers and even cascading reels to try and win from. It’s absolutely bonkers.

If you decide to be one of the first players ever, you will have exclusive access on the slot up until the 16th of December. Sadly, the game is not one of those jackpot slots we all know and love. But that’s not all folks. Thanks to Casumo, Golden Osiris is also added to the Jackpot Blizzard promotion. That’s right, if you decide to play this slot exclusively, you’ll also have a jackpot raffle ticket for each and every spin you pay for. It’s practically a win-win for all parties.

Thus, there’s no more need to preach about the offer. If you want to spice up your gambling life with Christmas just around the corner, there’s no better place to be than Casumo. The online gambling site has got promotions galore and even a new red-hot game which no other online casino is allowed to touch. At least, not for the next 2 weeks.