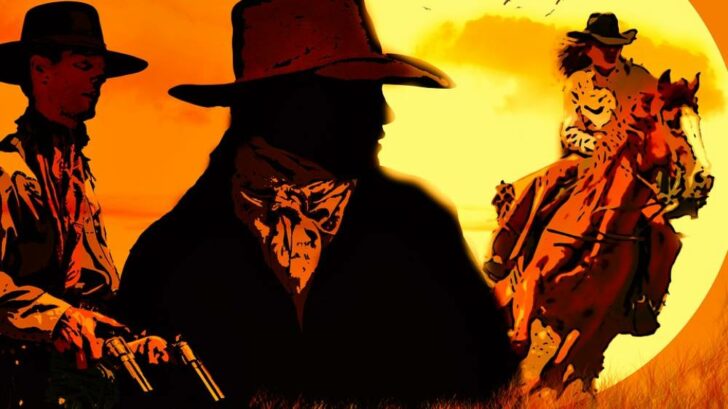 Thanks to Hollywood, probably one of the best known periods in American History is “The Wild West.” It was full of characters stereo-types, from cowboys to Native Americans. There were lawless mining towns, cattle driving cowboys, and according to Hollywood legend,lots of gunfights. You could hear about the famous characters of the time including the Wild Bill Hickok, James Gang, Wyatt Earp, and Billy the Kid. It was an era where everybody was looking to make a quick buck either through gold mining or criminal activity. As pioneers moved westward towards the California gold rush, they ended up at war with the native tribes, as they looked for business in trading pelts and exploiting those who would come after them.

When we look at Hollywood’s take on the Wild West, we can see the rickety frontier towns which always feature a saloon. Going through the swing doors, we find a typical movie tableau. There are old tables with dirty cowboys sitting around, smoking, drinking and playing poker and other variations of card games. Thanks to television shows such as “Maverick”, the idea of the poker playing cowboy has now been immortalised in American cultural history.  An unfortunate by-product of Hollywood is that today, many people have forgotten just how tough life was back in those days. It was, to all intents and purposes, almost impossible to make a living by keeping on the straight and narrow.

The Many Jobs Of Wild Bill Hickok

That’s why there were so many outlaws, gunslingers, and bent lawmen. One of the most famous of these was a former spy, soldier, cattle rancher, and gambler, Wild Bill Hickok. His real name was James Butler Hickok. He was a very crafty card player. He certainly knew how to win the jackpot. As well as being equally at ease with using his Smith and Wesson revolvers. He was a man who lived larger-than-life. And playing cards and serving justice were what made him famous throughout the West. But on a fateful day in August 1867 the life and death of Wild Bill Hickok would be forever tied together with the game of poker.

The Man And The Myth

On May 27th 1837 in La Salle county, Illinois, James Butler hiccup was born. It’s difficult to know much his childhood, or the period growing up as a young man. Over the years many of his deeds and activities have been exaggerated as he evolved into a symbol of the American Wild West. There’s a good chance that he did live the life of a frontiersman and took part in various occupations. For example, we know that he was a driver of livestock, and an army scout. Also a wagon master and a spy. Eventually he became a gunfighter along with being a lawman and probably his most famous activity, a notorious card player.

It was said that even as a teenager he was an excellent shot with a pistol and he was to later join General Jim Lane’s Free State Army.  They were a vigilante group active in Kansas. Whilst part of this vigilante group he met William Cody, who would later go on to become another legend of the Wild West better known as “Buffalo Bill.”

From Kansas To Dakota

Hickok served as a scout and a spy for the Union Army during the Civil War. It was during this period that he develops a skill for card jackpot games and for gambling. Around this time we also know that Hickok served as a deputy US marshal in Fort Riley, Kansas between 1867 and 1869. It should be noted that the only real law enforcement that took place in those days was thanks to the US military. The army had a presence in virtually all the new territories. Once they had put down the legal framework, then US Marshals would take over, to carrying the same authority.

On the whole, these Marshals were under the appointment of the President of the United States. In those days you could find them in both South and North Dakota, Arizona, New Mexico and West Texas. It was during this period, whilst working as a US marshal, that Wild Bill Hickok would kill his first man, whilst wearing his badge.

Maintaining Law And Order in a Frontier Town

Thanks to both ranching and the Gold Rush, towns in the Old West were known in those days as “boom towns.” They were situated all along all frontier territories. Probably the most famous of these were Tombstone in Arizona and Deadwood in South Dakota. Thanks to the possibilities of being able to make a fortune very quickly, it was no surprise that these two towns attracted frontiersmen from all over the United States. Once these towns had established themselves and moved from being almost totally lawless to having banks, hardware stores, land grant companies, brothels, churches and gambling halls, then US Marshals were normally brought in to maintain law and order. With fortunes coming and going so quickly, it’s not surprising that gambling was the number one pastime.

Common Types of Poker In The Wild West 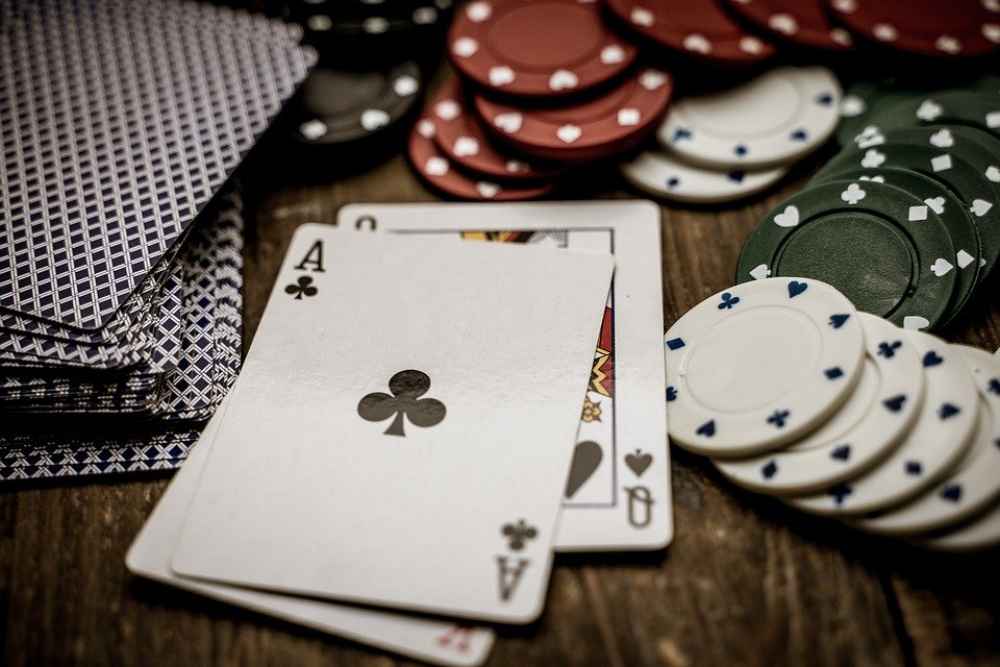 Although poker was probably the most popular card game in the wild west, saloons also featured such games as pharaoh, brag and 3-Card Monte. We should point out that the game of poker being played over 100 years ago was very different from the game we know today. It was a much simpler game. Today it would resemble stud or Texas hold’em. Poker card decks sometimes only consisted of 20 cards in the four suits. A player had to play the hand they were dealt and there was just a single draw. There was a certain poker variance which featured “fulls” and “triplets” as the best hands. Today we could refer to these as either a “full-house” or “3 of a kind.” Due to the limited number of cards in the deck, straights and flushes were very rare.

If reading about playing poker has wet your appetite, then we suggest that you head over to 32Red Poker. They have a massive selection of all the different poker variants, as well as a fantastic welcome bonus of 200% Up to €1000 for all new players!

With so much hard cash, along with precious gold and silver nuggets moving in and out of these boom towns, the job of protecting these assets fell to the Sheriff. He was essentially the only representation of law and order. He was also the leader of the posse and he would choose man to work underneath them. Just as in the Hollywood movies, the posse would ride out to hunt down thieves, robbers, cattle hustlers and murderers. Thanks to his stature, standing at over 6 feet tall, with a formidable moustache and long flowing red hair,

Wild Bill Hickok was certainly  one of the most famous and well known of these characters. He also had a Smith and Wesson revolver strapped to each hip. As a gunfighter, his reputation preceded him. A big problem with gambling in the saloons was that any sleight of hand or cheating could end up on the receiving end of a bullet. Hickok’s job, as with all sheriffs, was to deescalate potentially fatal situations. Those that normally came from a misunderstanding at the poker table. 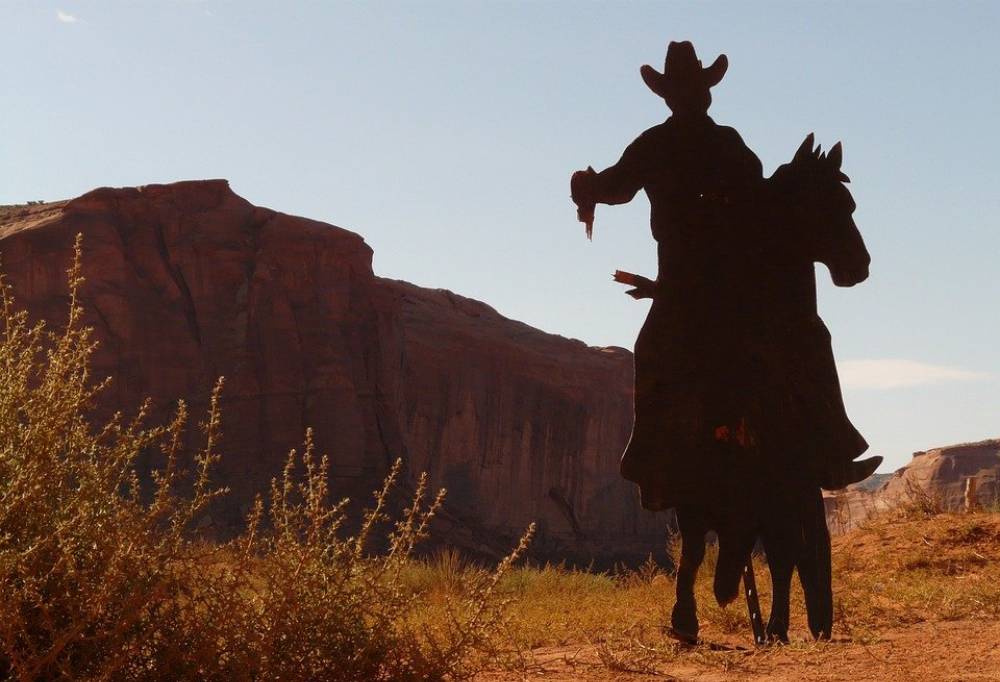 Though Hollywood likes to paint Wild Bill Hickok as a gun-slinging killer, the truth was almost totally the opposite. Wild Bill Hickok was largely responsible for the myths that surrounded him. In many ways, helped him maintain order simply because others were afraid of his reputation. The one time when we do know that he killed a man was in the Bulls Head Saloon of Abilene in Texas. Hickok and Phil Coe, who was the owner of the saloon, a businessman and also a fellow gambler, had a dispute in the bar. This escalated to the point when each reached for their guns and a shootout commenced. Unfortunately, this saw the death of the special deputy marshal Mike Williams. Although everyone testified that this was an accident, the incident would haunt Wild Bill Hickok turning him furthermore to drink.

The Sheriff Of Deadwood In South Dakota

The Black Hills of South Dakota are famous for their silver mines.  In the spring of 1876, Wild Bill Hickok arrived in the mining town of Deadwood, where he would  play the role of both Marshall and Sheriff. He quickly became a regular of the Number 10 Saloon.  Here you could often find him playing at the poker tables. Here the locals would play for all sorts of things. These included money, personal property, silver nuggets, and of course bragging rights. Hickok was a seasoned poker player who knew all the jackpot winning tips and tricks. He was all too familiar with the dark side of card games and gambling. He knew that a single misread poker tell could escalate and get out of hand. As such, even when he was playing in the salon, he always had one eye open to keep other tables in check.

On August the 1st 1876, a man named Bill Sutherland was propping up the bar in the Nuttall and Mann’s Saloon. There were the usual card games going on. After one of them, Wild Bill Hickok ended up throwing in his hand after losing at a game of poker. Getting up from the table, Sutherland sat down in his place. But being drunk, he quickly lost all his money and ended up completely broke. Hickok took pity on the man and offered him breakfast. As well as some form of compensation to help him out. But Bill Sutherland took this offer as an insult and stormed  out of the bar. 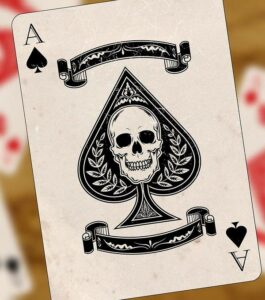 On the fateful August the 2nd, Wild Bill Hickok was playing jackpot poker in the Number 10 Saloon.  Unbeknown and unnoticed by everyone, Bill Sutherland entered the bar through the back door. He approached Wild Bill Hickok from behind. Raising his gun, he shouted, “Damn you take that.”  The single shot into the back of the head killed Wild Bill Hickok instantly.  Sutherland tried to shoot the other people sitting around the table. But fortunately his gun or the ammunition misfired. He then ran out through the front door into the street. His real name was Jack McCall and he was quickly apprehended, convicted and hanged for his crime.

Wild Bill Hickok died with his Smith and Western pistols still in their holsters. He never saw the face of the man who killed him. But to add to the stories and the myths of Wild Bill Hickok, they say that in his dead hand was a pair of black aces and black eights. These cards would go into poker history. Today we know this hand as the “dead man’s hand.” It would be interesting to see if you could be dealt this hand whilst playing at 32Red Poker. Just be sure to watch your ack!