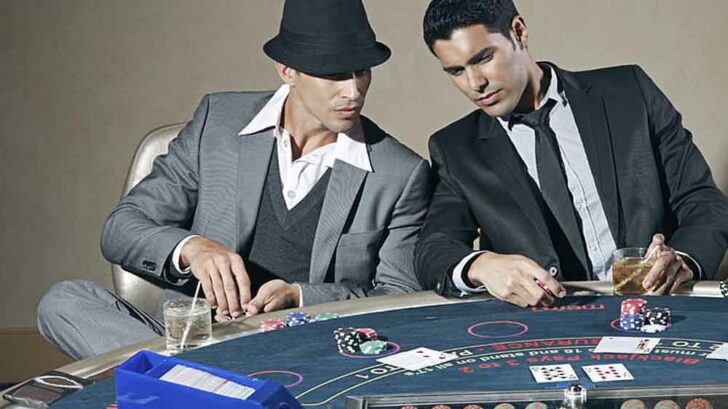 Introduction: How To Tell If Someone Is Cheating at Poker

So just how do you tell if someone is cheating at poker? We all know the feeling. We’re playing our favorite game and there’s someone at the table who’s maybe just a little too good. You can’t put your finger on it, but there’s definitely something amiss. They always seem to get the right card at the end and are able to win in spite of all the odds being against them. We are sure that every poker player has come across this character at least once in their playing career.

On the other hand, there are such things as hot streaks. When the player keeps on winning, a lot longer than you think is possible, be wary of putting it down to cheating. It’s certainly possible to enjoy a long winning hot streak, and the cards are not falling right for yourself. In this situation, we suggest that you cash out and call it a day. Better to have a least some of your bankroll survive to fight another day than let a hot streak clean you out.

But let’s say that a hot streak can’t explain their winning. What happens if you’re convinced that the other player is actually cheating, but you just can’t fathom out how? In other words how on earth do you spot a cheat? Here we’ve listed a number of things that you should keep your eyes open for.

How To Tell If Someone Is Cheating at Poker: They’ve Played Long Hours

This first hint only applies to online poker. If a player has been playing for a long period of time, and by that, we mean a minimum of 12 hours without a break, then there’s something going on in the background. A player who sits, glued to the screen for 18 – 24 hours is definitely up to something. And the most probable reason is that they’re playing and using a bot. This is a program that’s been designed to play optimal poker.

Just be wary of reporting someone to a casino for playing with a bot. We tend to suggest that everyone should mind their own business. Sometimes, a player is planning to play a marathon session, and nothing is going to sour his playing than being reported as a bot. This is especially true of weekends and holidays.

Again, this really refers to online poker. It’s another good hint that the player is a bot. If you notice another player constantly using the same patterns, then there’s a good chance of them playing with the help of a program and are probably not even human. You should really take some time to analyze the patterns of their play and check if they’re the same even over a number of different playing scenarios. Also note as to whether the player continues to make a silly mistake as the same situation repeats itself. Bots are programs written by people. Though the programmer can try and account for every situation, it’s very difficult to do so. And that’s where you’ll see the bot make the same mistake over and over.

Just keep in mind that there are some patterns in the playing of poker that are perfectly OK, like playing perfect strategy. So, before you go reporting on your fellow players, just be aware of what you’re actually looking at. And always show some discretion before reporting another online player as a bot.

How To Tell If Someone Is Cheating at Poker: Players Always at the Same Table

This is a sign in both online and live jackpot poker events. But it’s probably more suspicious in online poker. When you and your friends head off to the land-based casino, it’s pretty normal to sit yourselves down at the table most comfortable for all of you. In an online game, there could be thousands of different accounts set up with anyone poker website. So it would be pretty weird to find yourself playing against the same player over and over. To that end, if there are two players at the same table often, then it’s a pretty good sign that they’re cheating. You have no idea if they are in contact outside the game. You should assume that they are cheating and move yourself to another table. Though you can’t prove anything, it’s your bankroll and we suggest that you move just to be n the safe side of things.

This is something to look for both online and live. What happens is that you notice a certain pattern of behavior every time the same two players meet head to head. And by certain patterns of behavior, we mean that one player always folds, always value bets or always make the same mistakes. If it’s live poker, this can often point to a couple of players working together, with the goal being to split the pot after the game is over. Or it can even be a player teaming up with a bot. Of course, this is almost impossible to prove. So our suggestion is, if you’re feeling uncomfortable about the gameplay coming from the opposition, then cash out and move to another table.

Too Many Strange Bets With the Odds Against Them

This is a factor to look out for, especially if you’re playing online. If you notice that there’s a player who’s betting large, when in fact they should be folding, then there’s a red light right there. Yes, they could be ignorant of the rules and gameplay. And yes, they could also be very lucky. But if the behavior is consistent, and they always seem to come out on top at the end of each hand, then there’s a good chance that they are cheating. A few years ago, hackers broke into the casino’s own security systems. They installed malware that took photos of each players hands using the casino’s own eye in the sky camera network. This information was passed along to certain players allowing them to know when to go big and when to fold.

How To Tell If Someone Is Cheating at Poker: You’re Playing on a Lesser-Known Site

If you decide to play online poker, then it’s always best to find the best site to play poker. But if you decide to play at a less than reputable site, then you’re much more likely to come across cheaters. That’s because major sites value their reputation and will employ sophisticated means to root out and expose cheats. The chances are tat lesser sites simply don’t have the means or the manpower to enforce the rules rigidly. We suggest that you stick to well-known sites. Also, with a well-known site, you’re much more likely to get back any winnings or deposits. We can’t say the same of unlicensed and smaller sites.

Too Many Improbable Wins as the Dealer

This last cheat is as old as the hills. If you’re sat in a casino where someone other than the casino’s own dealer is dealing, then pay special attention to the dealer’s win percentages. See if this number differs depending on whether they’re dealing or not. You might be surprised to find a player unable to count to 21 in blackjack, suddenly becoming a shark when it’s their turn to deal. Sometimes this means that they’ve spent more time stacking the cards than playing poker. Watch how they shuffle and how they deal out the cards. At this point you may catch them cheating. If not, then also pay attention to other players around your table. Maybe there’s a player who’s benefiting from the dealer’s generosity. Maybe you remember the scene in the movie, “Rounders”, where Edward Norton’s character deals a very sweet hand to Matt Demon. Then they both get beaten up for their troubles.

Conclusion: How To Tell If Someone Is Cheating at Poker

Cheating at cards is part and parcel of playing and it’s been this way since the invention of card-playing games. On the whole, you have little need to worry about such things. A reputable casino has pit bosses, dealers, computer AI and security all on the lookout for cheats. And they’re pretty good at finding them. But it’s always good to have the knowledge of what to look for even if you may never actually face a cheat in all your gambling days. On the whole, if you do discover someone cheating, we suggest that you leave them be and look for another table.