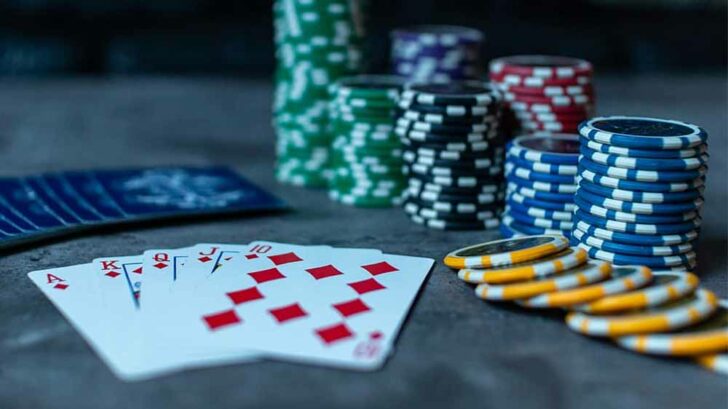 For those of you who already play Texas Hold’em, then you’ll know that the flop is no bad thing. It’s the first three cards from the dealer that are shown to each player. There are a couple of things that make Texas Hold’em different from other poker games like 7-Card Stud and 5-Card draw, and that is that each player receives just two cards. The dealer then puts out a total of 5 community cards for use by all the players. According to the rules from the National Table Games, flop poker uses a flop as the main factor in the game. You can find these games in Atlantic City, Biloxi, and several casinos across Missouri. It uses a single deck of 52 regular playing cards. There are no jokers or wild cards.  Online jackpot sites also favor Flop Poker so you have plenty of options to try it out.

In the standard casino game of flop poker, it’s the dealer who controls both the cards and the payouts. The players compete against each other in order to win a player-backed pot of cash, which is quite a new concept outside of the poker room. In the beginning, each player makes an Ante wager and a Pot wager. Now the former is any amount that fits within the table limits. And the latter is the table minimum bet. Every player gets three cards to face down. Once all the players have received their respective cards, then they can all taker a look. All players are in competition for the pot. But keep in mind that the decision to play the flop wager will depend to an extent on what the other players are holding. To this end, players are not allowed to show their cards to the other players.

To begin flop poker, each player makes an Ante wager and a Pot wager. The Ante is any amount that fits the table limits while the Pot wager is the table minimum. Each player receives three cards, face down, and can look at them after all the cards are out. Remember that all players are competing for the pot, but the decision to play the Flop wager may depend on what cards other players hold, so players are not allowed to show their cards to other players. After viewing their cards, then the players may fold, in which case they lose the Ante bet. Or they can raise with a flop be equal to their original wager. So even if they fold early and lose the Ante wager, there’s still a good chance that they can win the pot.

Now it’s the dealers turn to put up a flop, that is three cards for use by all the players. But unlike the traditional game of Texas Hold’em, here with flop poker, the players must use all three of their own cards with any two of the flop cards. Once the hand is over, there’s no additional wagering. So, any player with an Ante wager and a Flop wager will always win at least a pair of jacks according to the paytable. Remember that a pair of jacks or lower hand is a house win.

The flop poker pot simply goes to the player with the best poker hand. Just as with a regular game of poker. If it so happens that two or more players hold the same winning hand, then the pot is split evenly between them.

In truth, there isn’t really much in the way of strategy in flop poker. The game is for all people who enjoy a hand of poker. But don’t want to spend years trying to improve their game. The edge is always variable simply because you’re playing against both the house and the other players. Of course, the more players there are, then the less chance of winning the pot. Having said that, the pot will be that much bigger if you do happen to win it. It goes without saying that in flop poker there’s no house edge on the pot bet, and no players edge too boot.

Because you’ll be needing at least a pair of jacks to win the flop poker Ante bet, then it pays to raise with any three cards that are a jack or higher. Also keep in mind that if you have a pair or three-to-a-flush or straight, then you should also play the raise wager.

You can also find flop poker in casinos with a three-card bonus wager and a $1 progressive jackpot. The paytables may vary, but the game is very similar to the old three-Card-Poker-Progressive.
Enjoy and win the jackpot online!