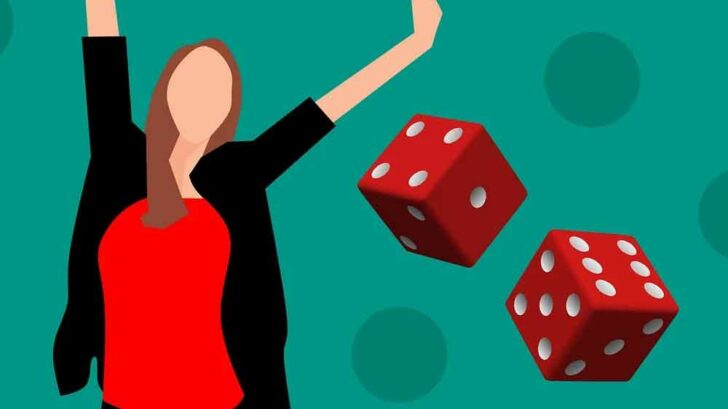 Because we get lots of beginner craps questions, we thought we’d lay out some answers. The first thing you should note about the casino game of craps is that there’s absolutely no skill involved in the playing of it. Unlike many other casino jackpot games, the game results are entirely random. In spite of having zero elements of skill, craps is always one of the most popular games in the casino, and the craps tables always appear to be busy. Because the game encourages the players to be more animated, there’s always what appears to be a party happening around the games table.

For some reason, many new players or would-be players appear to be intimidated by the game. As you’ll see, there’s no reason for this. Hopefully, these jackpot winning tips and tricks will help you. So in this post, let’s answer some of those beginner questions and hopefully put some nervous minds to rest.

What Are the Basic Rules of Craps?

Craps is essentially a game of dice. It uses two six-sided dice and is played in rounds, though you’ll not hear anyone speak of “rounds”. When the “shooter” (dice throw) throws for the first time is when a round starts. This first throw is known as the “come out roll”. Now lets talk a little about the betting. So, a basic bet is called a “pass the line” bet. This is just a bet that the shooter will “succeed” with his throw. Now a bet can be won/lost immediately, or it may need successive throws. If the shooter rolls a 7 or an 11 on the come-out roll, the bet is won immediately. By the way, it’s an even-money bet. Now, if the shooter rolls a 2,3 or a 12 on the come-out roll, then the bet is instantly lost.

But if the shooter rolls any other number than those we’ve discussed (4,5,6,8,9 or a 10) then a “point” is set. Now the shooter must continue to roll until one of two things happens; either he rolls a point number again (succeeding) or he rolls a 7 (failing). If he happens to roll the point number again, but before he rolls a 7, then the pass line bet is won at even money. If he rolls the reverse (rolls a 7 before the point number) then the pass line bet is lost. Once the bets are resolved (won or lost) then a new round will start. The rest of the gameplay is really just about the various other bets one can use.

Once you understand the basics, then you’ll find that both the dealers and the stickmen are perfectly happy to answer any questions you might have. So don’t be shy in that department. You can also ask other gamblers. If you’re new and playing beginner craps, you’ll find that the people playing craps around you, maybe because of the totally random nature of the game, is much less serious and much more helpful than those sat playing more “serious” casino games.

Can Craps Be Rigged?

Seeing as everything about this game is dependent on the throw of dice, well, back in the day it was possible to rig a game. You’d use weighted dice to ensure your numbers came up. Today all the dice are transparent, so you can’t cheat with weights anymore. There’s always lots of security around to ensure that the players can’t easily swap out the dice for their own ones. Another factor to deter any cheating is that the casino will change the dice regularly throughout the game. This is to prevent any dice that are less than perfect having a long-term effect on the results. All commercial casinos are perfectly safe to play in. Casino licenses are not cheap, so no casino is going to risk gaining just a few more dollars at the risk of losing the whole business.

Playing craps on the street is going to be a different matter altogether. And it’s not something we would ever recommend.

Beginner Craps: How Do You Easily Win at Craps?

One of the great things about craps is that the house edge is really very low..1.41%. Of course, this means that the house will win in the log run. But such a low house edge does give you an excellent chance of having some pretty serious winning streaks. We would suggest that you should always avoid the sucker bet, as well as any casino craps betting systems you might have read about or seen videos about on Youtube. These systems will not increase your jackpot winning chances. As we said, craps is a game with a random result, so all those people promising that their betting system works are just a crock of rubbish.

Remember that they make their money selling the system, not playing with it. Otherwise, they would be rich from it themselves. We should explain that the “sucker bets” in craps are the ones with the highest payouts. They also happen to have the worst odds.

What Are the Payouts in Craps?

Virtually all the payouts in craps are even money. This means that if you were to bet $50 and then you win….you’d win $50. Even money payout bets are on the following bets:

Here are the payouts for the odds bet:

We don’t recommend making any other bets at the craps table. That’s because the house edge goes up through the roof, especially with the higher payout bets. Just stick with the one’s we show. Here’s an example: A bet on a hard 8 will win if you get a pair of 4’s. this bet pays out at 9 to 1 which sounds like a deal. But remember that the odds of winning the bet are 10 to 1 and that the house edge goes up to a massive 9.09%. Take it from us, it’s just not worth the risk. Without going into them here, there are even worse bets available.

What Are the Best Odds in Craps?

You’ll find these by simply sticking to the most basic of bets; pass, don’t pass, come, don’t come and something called the “free odds bet”. We’ve already spoken about the pass bet. Let’s first have a look at the don’t pass bet. This is just betting against the shooter. It pays out even money if the shooter fails. This is known as “wrong betting” or “dark betting” because it’s kinda considered rude to bet against someone. But there’s absolutely nothing inherently wrong with doing so….so go ahead if you want to. The come bet is a bet on the next roll which treats it as a new come-out roll. Obviously, the don’t come bet is the same as the don’t pass bet but in this different situation.

What Is the Odds Bet in Craps?

You should also be aware, that because the bet carries zero house edge, the casino will limit the size of the odds bet you’re allowed to place. After all, they’re not stupid. So the minimum odds bet is the same size as your pass line bet. Now in some casinos, you’ll be limited to 2x the pass line bet. Other casinos might allow 100x. So, if you bet a $5 on the pass line, then you could place a $500 bet with the odds bet in a casino that allowed a 100x size. Another bet is “laying odds”. This is when you make an odds bet after betting on a don’t pass line bet. Once again, the house edge is a big fat zero.

What Are the Odds of Rolling a 7?

Because you have two dice, you actually have more ways to roll out a 7 than any other total number. Of all the dices outcomes, there are a total of 36 results. 6 results of those will result in a 7 being rolled. So…6/36 or 1/6. So the odds of rolling a 7 are 5 to 1.

Craps is really one of the best casino games. It’s fast-paced, and there’s no skill involved. It’s also easier to win than with many other casino games. One thing is for sure though, everyone standing around the craps table will be shouting and having a great time. Don’t be shy about trying it for the first time. Beginner craps are a great ice breaker at the casino. After a few minutes, you’ll be having the time of your life. And isn’t that the real purpose of gambling anyway?