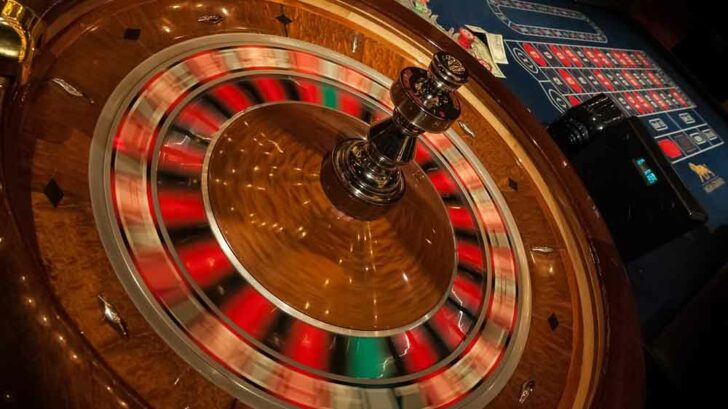 Let’s face the truth…roulette is a completely random game. The house edge in roulette is pretty low. Essentially your results are in the hands of a tiny ball that bounces around on the roulette wheel. So to come away from the roulette table with a nice profit is really a rare occurrence and not the norm. Having said that, there are certain “openings” with roulette whereby you can make a profit in rare cases. In fact, some researches say that in certain situations, you can gain up to an 18% advantage. Yeah…we don’t believe it either. But let’s have a look at the numbers.

By far the worse game of this bunch is the US roulette. Thanks to having two zero pockets that favor the house. European roulette is the middle ground, with just one zero pockets. But French roulette is the one to be playing. Even though it’s played on a European wheel. This is because it has a “la partage” rule, which pays half back on losing even-money bets that land on the zero. But the real problem with French roulette is actually finding a game. For obvious reasons, no casino wants to offer an unskilled game at a low percentage like 1.35% house edge. To that end, you’re going to be stuck with either US or Euro roulette in nearly all casinos. Keep in mind that the Euro version gives the casino a house edge of 2.70%, which is bearable. But the US roulette table will punish you with a house edge of a whopping 5.26%.

An edge In Roulette: Players Can Gain a Big House Edge

It’s not in any casino’s interest to offer you games whereby you end up making the long term profits. And with roulette, it’s a casino favorite simply because you don’t really have any chance to win consistently. But on hearing this, researchers Michael Small and Chi Kong Tse might say, “hold my beer”. They found a means whereby they can knock the odds into the bleachers. The method involves determining the rate at which both the wheel and the ball are spinning. From this, they were able to make some pretty accurate guesses on where about’s the ball might land.

“Knowing the initial conditions allows you to beat the odds,” Small said. “In some cases, you can beat them quite significantly.”

So Just How Did Small and Tse Crush Roulette?

Using a European wheel, they were able to set up a clicker device, which along with some serious calculations allowed them to turn the regular house edge of 2.0% into an impressive average of 18%. For this feat, they needed to study several aspects of the physical play from the dealer. To that end they studied the velocity of the dealer’s release and the spin of the wheel. They looked at the dealer’s release point on the wheel along with just how much friction would slow the ball. Yes, it’s complicated.

Of course, you can’t see any of these things with the naked eye. So they set up a video camera above the table, and it’s using the results of this that they were able to reach their conclusions. They wrote up a university paper on their findings. Once they had all the data crunched, then it was time to put it all into practice. They ran 700 “trials” in order to test their theory.

These two students were not the first to use an electronic device to beat the table games. Going back to the 1970s a group of post-grad students from the University of California Santa Cruz who called themselves “Eudaemons”. They had tiny computers concealed in their shoes. They won $10,000 and promptly exited stage left, happy with the satisfaction that they’re technique worked. It goes without saying that using such an electronic device in a casino was highly illegal. Though, funnily enough, the state of Nevada had no such laws in place back then. This group never published their means, so it’s still unknown exactly how they pulled it off.

In this respect, Tse and Small were different in that they offered all their materials as to how they accomplished their studies. It should be pointed out that all their research was conducted in a lab, as setting up a video camera above a working roulette wheel was never going to happen.

In 2004, a trio of gamblers managed to use a scanner to track the speed of the roulette wheel in the Ritz Casino in London. Playing for just a couple of nights, they managed to win over £1.3 million. Though they ended up being arrested, they were later cleared and allowed to keep their rewards as the casino had no restrictions on electronic devices at the time. You can bet they do now!

So now we know that you can beat the roulette wheel, it’s unfortunate that you can’t put this into practical use. Wheel bias involves looking for favored pockets on the wheel. This works because over time, the bearings in the wheel wear down unevenly. Way back in 1873, an English engineer called Joseph Jagger played this system to the max. He started by sending 6 clerks to visit the casinos in Monte Carlo ad record the roulette wheel’s results. On their return, Jagger studies all their data and concluded that certain wheels were indeed biased. He then visited Monte Carlo and ended up winning a staggering £65,000, which would be over £7 million at today’s rate of exchange.

Then in the 1980s, a certain Billy Walters was able to beat the house via roulette wheel bias. He leads a team that called themselves, the “computer team” and ended up winning around $4 million at the Atlantic City casinos. But in truth, these stories are unlikely to be ever repeated. Nearly all of today’s casinos use the same wheel, the “Starburst” and it’s famed for being totally solid.
But Small does suggest you can still find bias if you look carefully enough. As he says, “If you wish to beat the house, look for a wheel for which the ball drops only from one side of the rim — that is, a crooked table. Prediction becomes substantially simpler and more reliable.”

Can You Improve Your Roulette Odds?

Coming back down to earth, are there any other ways to improve your odds at roulette? The first thing to do would be to read our Roulette Strategies guides. Well, as we previously mentioned, just stick to either European or better still, French roulette. These will offer the lowest house edge. These are 1.35% and 2.70% respectively. Most online casinos will feature a European wheel. Both Microgaming and RealTime Gaming offer French roulette in certain European countries.

An Edge In Roulette: Look for Roulette Bonuses

Many online casinos will offer a roulette deposit bonus. After you’ve found the best casino site to play, go to the “Table Games deals” on their websites. But be aware that these bonuses are not really free money that you can withdraw from your account after signing up. On the whole, they’re going to be based around a matched percentage of the original amount you deposit. To be ale to withdraw any funds, you must first meet the site’s terms and conditions. We strongly suggest that you read them before starting any casino games.

$10,000 may sound like a lot to bet. However, you theoretically won’t lose much money earning this bonus when considering the house’s low edge in roulette.

Both online and land-based casinos want your custom. And you’ll find that part of the overall package they’ll offer you will include a VIP program. Sign up to this, either online or via the casino’s own player’s club and then you’ll be able to take full advantage of these offers. Also if you’re playing at a bricks and mortar casino, remember to ask the dealer or the pit boss that you wish to have your play “rated”. Though these factors do not affect the house edge of any of the games by receiving freebies and bonuses, you can come out at least even by the end of the evening.

Both land-based and online casinos offer loyalty rewards to roulette players. You should ensure that you’re signed up for the VIP program at your favorite casino to take advantage of.

Online roulette begins delivering loyalty perks after you deposit and place real-money bets. Be sure to check out our best casino jackpot reviews Casinos require you to sign up for their player’s club and then tell the dealer that you wish to be “rated.”