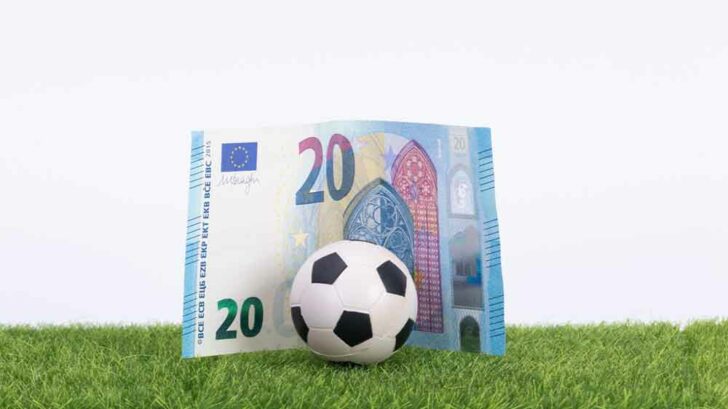 The History of Football Bets

The history of football and football bets is long and shrouded in mystery. It’s not really known when football first began. But there is evidence that some ancient civilizations did play a game that was similar. Back then, balls were made from animal intestines or linen. These have been found in ancient Egyptian tombs. Over in ancient China, balls of a similar size have been found which were stuffed with feathers. Nevertheless, when football first appeared in England in the mid-19th century, then it quickly evolved into the modern form we see today. Over its evolution, one of the major changes to take place was the introduction of standardised playing rules.

The Origin of Football Bets

As with the game of football itself, we have no definitive history about betting on football. It’s probably safe to assume that there were some forms of betting, as the sport evolved from almost one thousand years ago. In the UK, before the 1960s, all football bets were illegal. Of course, that doesn’t mean that betting didn’t take place. But it was probably done in criminal safehouses or on the streets.

In 1923 a football pools bookmaker called Littlewoods was the first to offer football pool betting. This took place outside of the Old Trafford ground. Football pools were very different instruments compared with how we bet today. For example, there were a number of scoring systems and the most popular awarded points for each win draw or away win. The weekly pool betting which was introduced by Littlewoods instantly proved very popular. In fact, this pool betting still exists today. Back then there was a scoring system where the gambler would receive points on how close they guess the results involving in 12 games.

It was only in the early 20th century that major bookmakers like William Hill and Coral decided to follow Ladbrokes lead. Back then the main focus of sports betting was on dog racing and horse racing. Betting was seen as a traditional working-class activity and, apart from the football pools, all forms of sports gambling were seen as low class, uncouth and seedy. This reputation was enforced by criminal gangs who would force punters to place bets.

The Rise of Football Bets

Finally in 1916, with the passing of the Gaming Act, all gambling was legalised and betting shops sprung up.in high streets up and down the country. Now football fans were able to bet on football. Not only that but with many more options than offered with the simple pools bets. In fact, this one factor was to change the face of betting and sportsbooks throughout the United Kingdom during this period. For the first time, you could win a sizable football jackpot. Bookmakers and their betting shops would never be the same again.

Thanks to the 1960 Gaming Act, from May 1961, all betting shops became legal and were allowed to open to the public. Sports fans could finally bet on many different sports and utilise different methods than those associated with football betting. Although it did take a couple of years for sports betting to catch on, the number of betting shops that opened during this period was astronomical. Thanks to the idea that betting was somehow sinful, the UK Parliament pushed for betting shops to be as dark as possible with blacked-out windows. There was to be no advertising to potential customers. Unfortunately, this led to many of the public seeing betting shops as being decidedly unglamorous places. If you were to couple these betting shop requirements with the fact that all sports gambling has been illegal up until that point, then it was no surprise that the public regarded football betting, along with other forms of sports betting, as seedy. This attitude was to continue during the 60s, 70s and 80s.

After some time, the number of football bets started to increase dramatically. During this period they were the 3 major betting shop players; Coral, Ladbrokes and William Hill. Between them, these three dominated the sports betting space and opened many betting shops in UK High streets. Thankfully new legislation in 1986 meant that betting shops could have brighter interiors, with a more modern feel. Another huge upgrade was being allowed to have televisions inside showing the sports taking place in real-time.

But the actual betting options available for punters during this period were extremely limited. For example, there were minimum treble rules. This meant that a game needed to be shown on live TV so that a punter could bet on it. You could still place a football bet on non-live games, but in order to do so, you would still need to place up to two bets on a live game.

Stepping out of the Shadows

In the 1990s due to the power of television betting finally stepped out of the Shadows and entered the mainstream public consciousness. In doing so, it opened the markets to millions of new members of the public who wanted some part of the betting action. Probably one of the major key elements for this revolution was when Sky Sports bought the broadcasting rights of the Premier League in 1992. Up until this time, only a few major games were on television. But Sky Sport was able to show multiple games every weekend. Keep in mind that during this period football bets could only be taken on live TV games. So now there were many more games being shown. And that created many more possibilities for sports bettors across the country.

Thanks to football betting becoming more mainstream then betting shops became increasingly more popular. This was also reflected in the interior decor of the shops. Now they were much brighter and more customer-friendly. It was also during this period that innovation came into being that was to change the face of sports betting forever. Namely that a punter could place a football bet whilst the game was still being shown on television. Up until this point, all betting had to take place before the game actually started.

You can look upon this as a precursor to what is known today as in-play or live betting. In fact, these bets now form part of most gamblers jackpot winning strategies. In many ways, the introduction of the internet has changed sports betting in ways that never could have been imagined when the British Government passed the Gambling Act in 1961. The Birth of the Online Operators

The early 90s saw an explosion in the uptake of the internet by the betting public. This allowed for new types of bookmakers such as bet365 and Betfair. These new online bookmakers were to claim a large piece of the betting pie. Unlike Ladbrokes, William Hill or Coral these new betting sportsbooks were solely based online. They were also able to offer many different types of soccer betting markets for football fans. And without a chain of expensive high street betting shops, sites like 22Bet Sportsbook, could offer better pricing. New football bets were introduced, such as wagers on corners, yellow cards or penalties. Bets which would have been impossible just a few years earlier. And yet now, thanks to the internet, they are available to all players who wish to play.

In the early days of the internet, some other changes took place which was to have an impact on the future betting marketplace. One of these was in 2002 when the government Betting tax was abolished. So for the first time, a bettor could gamble completely tax-free.  Those taxes were moved over to the sports bookmaker’s gross profits. The regulations around gambling in sports were also relaxed. For example, in the same year, the minimum trebles rule was also dropped. This meant that for the first time single football bet could be placed on any match or any type of bet. This acted to promote online betting as many started to believe that they could now win the jackpot online.

A Snapshot of Contemporary Football Bets

Over the last decade, the face of sports betting has changed completely. It now looks very different. A typical online bookmaker can receive football bets from players who can be based anywhere in the world. Today’s sportsbooks represent a massive range of different types of sports along with an equally huge range of betting options. The internet and sportsbooks allowed anyone to bet on a game, at any time, and from anywhere in the world. Just do a simple Google search to find online Toto sites. You’ll see that 22Bet Sportsbook runs its own Toto betting jackpot. They also offer all new players a great welcome bonus of 122% up to €100!

Due to a constantly changing legal environment that surrounds all betting, and in particular in reference to problem gambling, many previously predicted that the traditional betting shop would die a death. Particularly with the introduction of online betting entities. But this hasn’t been the case. Well, at least not so far. Although there has been some decline in the number of betting shops, the ones that are open are still functioning well. Having said this, the majority of today’s punters that take part in sports betting do so from their homes.

One interesting leftover from the past is football pools. Being over 100 years old, you would imagine that they would have simply disappeared, thanks to the internet. Of course, with all the new online betting options, football pools cannot compete. In the 1960s, around 1 in 4 working-class people played the football pools. Today that number is much reduced. It’s estimated that an average of around 350,000 people play the pools every weekend