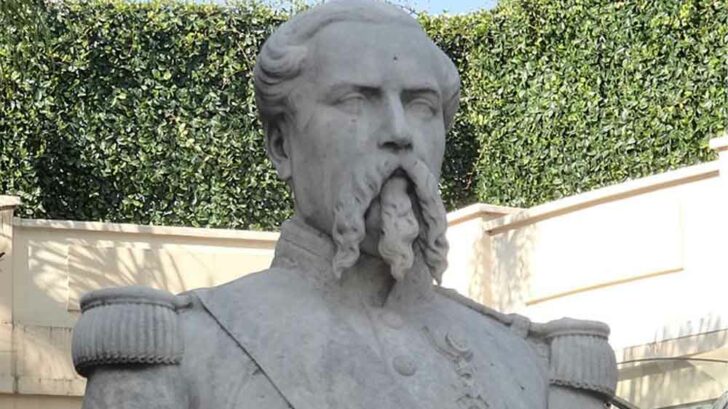 How Francois Blanc Used Roulette to Dominate the Casino World

So what do you know about Francois Blanc and his roulette wheel? When we think of the casino, many of us automatically think of the roulette wheel. This is definitely a stereotype, but it’s not the most popular game in the casino. That honor goes to the jackpot slots machines. These noisy and colorful machines have really taken over all casinos. There are these machines everywhere. But going back a few decades, then roulette really did dominate the casino. And going back still further, we can discover where and how European roulette came into being.

Who Was Francois Blanc?

Today he’s known as the inventor of the European roulette wheel. He was an entrepreneur who lives between 1806 till 1877. He carried the nick-name of “Wizard of Homburg” and “Magician of Monte Carlo”. Growing up in a small town in the south of France, Francois Blanc and his brother, Louis, looked forwards to the circus coming to visit every year. Eventually, when they were both older, they were able to join a circus. This work was to take them all over France and they learned many of the tricks of the trade. Once their circus adventures were over, they both settled in Marseilles and started to work in a casino.

Strike It Rich By Any Means

The two brothers had a common dream, that was to be fabulously wealthy. Whilst working at the casino, they were able to amass a small fortune. Later, they used this as seed capital to start their own bank in Bordeaux. They used this bank as a vehicle to speculate on property and pensions, though it must be said that they didn’t exactly follow the law. They used all sorts of questionable methods to make money. And though many of these were not against the law at the time, they would become illegal thanks to the efforts of these two brothers. In the end, both brothers were arrested. Though they served no jail time, they were forced to pay fines for bribing officials. After this episode, they decided to head for newer pastures, and so packed up the Bordeaux operation, and moved to the French capital, Paris.

From Paris To Germany

Once they had settled in Paris, the two set about flouting the gambling laws of the time and set up their own casino to do so. Unfortunately for the, just a few months into their new venture, the King of France, King Louis Philippe outlawed all gambling throughout the whole of France. So the Blanc brothers were forced to move yet again. This time, they made their way to the German town of Bad Homburg. here they were able to open a casino and it’s here they experienced their first real success.

When they had arrived in the town, they found it was struggling financially. So the Blancs made a lucrative contract with the local monarch that would include all forms of entertainment. But these brothers certainly knew what they were doing. Within a year, Homburg had become Europe’s most popular holiday destination. This was no doubt thanks to the spas for health, the casinos to win the jackpot, the theaters, and the elegant and luxurious hotels. It was, without a doubt, a huge success.

The Invention Of The European Roulette Wheel

The problem for the Blanc brothers was that Paris was still reigning supreme as the casino capital of Europe. They desperately needed something that would set Homburg apart. And so, in 1843, he invented the European roulette wheel with just a single zero. At the time, there were other wheels, but all features 2 sets of zeros, a single and a double. Francois’ was the first to only have a single zero. You have to remember that gamblers of the time, were a pretty sophisticated bunch. They knew the difference just having a single zero would have over the game’s overall probability. With the two zero possibilities, the house edge was 5.26%. You obtain this by dividing the two friendly slots by the total number of pockets (2/38).

His new wheel featured a house edge of just 2.70%. As you can imagine, with these better odds, it wasn’t long for word to spread. Within no time, Homburg became the gambling capital of Europe. It is said that Francois Blanc had made a pact with the devil. This was because if you were to add together all the numbers on the roulette wheel, they would total to 666, the mark of the beast! By having the house advantage, he introduced one of the best jackpot strategies and they became instantly very rich indeed.

Francois Moves His Empire To Monaco

In the early 1860s, Frankfurt decided to outlaw all gambling activities. Of course, this was to effect Bad Homburg, as well as the rest of Germany. Such a decision, left Francois Blancs up in the air, with no means of pursuing their casino businesses. But as luck would have it, the Monaco royal family were looking for a means to put the tiny principality on the map. Situated between the French Riviera and the Mediterranean Sea, it did draw a fair number of tourists during the Summer season.

The appeal was instant. For a start, the Prince of Monaco has recently legalized all gambling. The Prince thought that the Blancs would be a good fit for getting Monaco on the map as a gambling destination. The only problem was that the principality had no money, and Monaco was a relatively isolated place, with few roads and railways.

The Blancs Make A Huge Investment

Though they were more or less forced to close down everything in Germany and leave, they did bring with them a fortune of 2.3 million Francs. Besides building casinos, they also invested in infrastructures like railways and roads. Because the Royal family had been in dire financial straights before the arrival of the Blancs, they gave the brothers cart-blache to do whatever was necessary to grow the tiny place into a gambler’s paradise. But their gamble paid off. within it’s first year, over 30,000 people visited and played at their casinos.

Probably the biggest factor in their success in Monaco was the fact that the royal family were true to their word and never interfered with the brother’s efforts to introduce jackpot games. Gamblers were coming to Monaco, thanks to the sun, the beach, the mountains, but most of all, for the European wheel on the roulette table. At the time, nearly all other casinos were still offering the older roulette system. Within a relatively short time, the brothers saw their investments pay off as well as amassing a huge fortune in the process.

The Legacy Of Francois Blanc And European Roulette

Of course, you can’t keep a good thing down. And soon enough, many other casinos scattered all over Europe began to offer the European wheel for Roulette. So much so that many gamblers were having difficulties in separating themselves from the competition with a single zero. The French managed to solve this problem in that most elegant French manner. It’s a rule in the roulette gameplay and is called “La Partage”. Essentially, this will deliver half your initial bet when the ball lands on a zero. But to qualify, you must have placed an even-money bet.

Here’s an example of how la partage works:

You bet $10 on red/black.
The ball lands on the zero pockets.
You receive $5 back.
Keep in mind that the European wheel already offers a fair house edge at 2.70%. But French roulette lowers the house advantage even more to 1.35%.

Unfortunately, not many countries offer the la partage system. Of course, you can still find it in France. Also Belgium Germany, Italy, and Poland. The French system really represents the peak of roulette evolution and the pinnacle of Francois Blanc’s work.