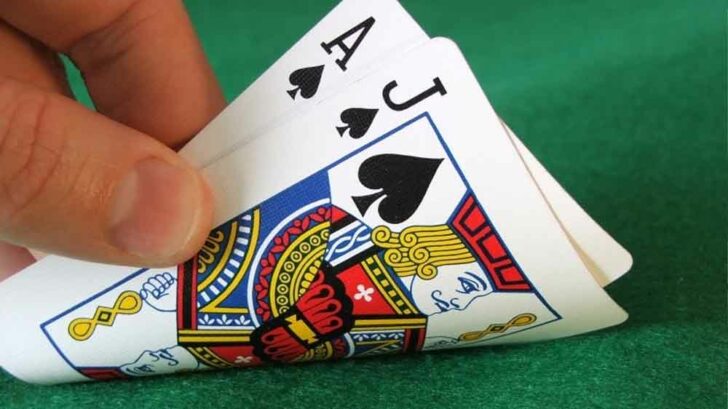 Can You Apply Game Theory to Blackjack?

Most people have heard of the expression “game theory” at some point. In the movie “Crazy Rich Asians”, the character of Constance Wu is phenomenal at the games of Mahjong and poker, thanks to game theory. Or so she says. Game theory is certainly a powerful factor, though probably not in the manner shown by Hollywood. You’ll often hear the term discussed around a head to head game of cards. But what if we could apply game theory to blackjack? Let’s see if we can become better players by utilizing this idea. But first, we need to understand what exactly is game theory.

So What Is Game Theory?

In the simplest terms, it’s the application of mathematics to the decisions you make. According to Wikipedia, they are “mathematical models of strategic interaction”. For example, whether to fold or raise in jackpot poker or hit or stay in blackjack. But game theory is not just for card games. You’ll find it in virtually all human endeavors, from the stock market to police work. The idea is that it can produce mathematical models of future human behavior. So if we’re going to be applying game theory in gaming, then we will first need to have a minimum of two players in the competition.

The Limitations of Game Theory

First off, you should discard any ideas of game theory you might have seen in Hollywood. Game theory is certainly not a powerful and infallible means of making perfect decisions. Looking deeper, there are essentially two needs for game theory to work. The first thing is data and lots of it. That’s because for game theory to have any practical use, models need to be built and tested. There’s no sudden “eureka” moment of absolute clarity whereby some budding big-brain invents a working mathematical model right off the bat. Once you built a model, you then need to test it, modify it, and refine it. And each time testing it again and again. This all takes time and effort.

Though you might think you’ve stumbled into a math class, we are talking about poker and blackjack here. Now the second thing we need is a small number of variables. The smaller, the better. That’s why one-on-one is best as there are less likely to be things that can change. Lots of people create lots of mess. So if you have a lot of people playing one game, then things can quickly become to complicated to track. The simpler the model, then the easier it is to find the rules of game theory.

To see more clearly the reasons why blackjack and game theory are less than suited, we should first take a look at a game where they are more suited. And that’ll be poker, and in particular, Texas Hold’em. With this game, there’s no “house” and you’re not playing against the dealer. Each player has to beat out all the other players on how to win the jackpot. So player interaction is assured. And it’s this factor, that of player interaction, that means the essential definition of game theory is being met. Namely that at least two players are striving for a better result.

But the same can’t be said for blackjack. With this game, you could end up playing entire hands without any inter-reaction what so ever. Essentially you’re just saying “hit” or “stay”. What the dealer does is to follow a strict set of rules, so there’s no individual or personal game-play input happening from that end. Yes, it’s true that a player can affect the outcome of your hand depending on whether they take the offered card or not. But game theory can’t help us with that decision. We have zero control over what your opponent will do. And you’ll never have enough information before the round is complete in order to see how much the previous hand has affected your own outcome. Thus it fails on both the basic needs to construct a game theory model.

Really, if you chose to model that, then you’d have to take into consideration all the cards from the same deck. But that’s not game theory. There’s no mathematical model to be found within. Actually, that’s card counting!

Why Game Theory Works for Blackjack

The problem with blackjack and the use of game theory is the lack of decision making to be able to construct an accurate model. But on the other hand, we do know that a mathematical model can exist within the game of blackjack itself. We call it “basic strategy”. In truth, a basic strategy player isn’t really going to benefit greatly from game theory. The existing mathematical formula of basic strategy already covers all the bases in blackjack and has been shown to work very well indeed in the real-life gambling environment. But that doesn’t mean it can’t be customized and boosted up.

A point to keep in mind is that blackjack still has winners and losers. Though the house may not be the cleverest opponent, it could be argued that it does represent a real opponent in the game-play. Likewise, there are strategies that will most definitely help you win or simply achieve a better result. So, in some ways, that’s pretty close to a game theory opponent. The missing additional sources of information are what we call “counting cards”. The famous MIT blackjack team was able to track and win millions from the casinos. We’re not at that level, but still, if we make the effort to track aces, two’s, three’s, and Kings. We add a one for every ace and King that appears and subtract a one for each card of two or three.

The higher the resulting number, then the greater the chance that the deck will spit out a lower value card. This will definitely help increase your jackpot winning chances.

Of Course, Now We Run Into Our Problem

But we’re still short of true game theory. That’s because we can’t construct a mathematical model. We would need models of when we hit when we stay etc. These would be based on the values in our hands as well as the numbers in our heads. Of course, all this would need to be both condensed and diluted down enough for a player to employ them quickly in the heat and emotion of a real money card game. And we can’t see that happening any time soon. In order to solve this conundrum, it needs a lot more time. And effort. In the future, there’s hope that with a bit of mind-tracking, we can utilize game theory for all casino games.

Conclusion: Can You Apply Game Theory to Blackjack?

Game theory is a topic that’s always relevant to many of today’s activities. And that includes when we’re wagering at the casino playing jackpot games. As far as blackjack goes, there’s been no development towards better game theory, in part thanks to how basic strategy fulfills this role already. For now, the basic strategy does a great job. Of course, we can’t say what the future will hold. Maybe some big-brained mathematician can have a look at game theory and it’s effects on the game of blackjack. And in so doing, discover some new aspects of untapped sources of information. These could then be of use to develop a new model. Maybe even if it’s just a new way to count and track cards more reliably. But we’re not there yet!