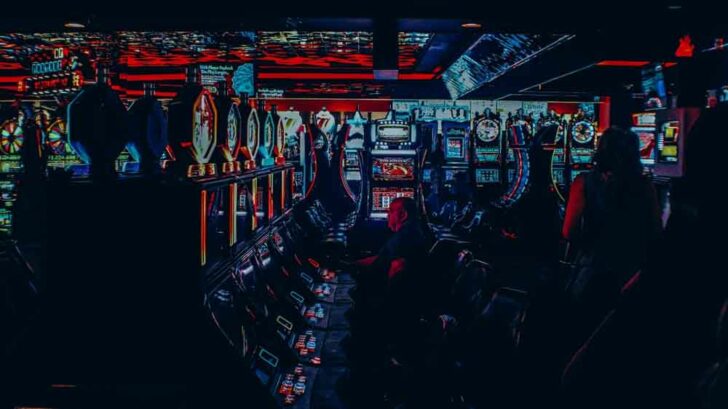 Have you ever thought about winning the jackpot on the Megabucks slot machine?  If there’s a motto for gamblers coming in search of a fortune in Las Vegas, then it’s, “Go big, or go home”! The thing about playing jackpot slots in the casino is that in order to win big, you have to place maximum bets. So, though we always reckon you should follow some serious guidelines on money management, it’s also true that you’ll never hit the big time unless you slash out. And if you’re going to be laying the massive progressive jackpot slots, then your dream is to hit the main prize. And there’s just no way of doing that without playing to the max.

Unfortunately, the vast majority of gamblers playing progressive slot machines will not become overnight millionaires. Quite the opposite. They will lose money thanks to the house edge and every game inherent odds, which stack up against them. The casino is a business and it runs on the losses of most of its customers. But on March 21st, 2003, a random tourist decided to try his luck and in an instant became a Las Vegas legend.

It was on that fateful date that a young man came from Los Angeles to visit his relatives. A member of his family, his uncle to be precise, said that he should try the Megabucks slot machine which was in the Excalibur Hotel and Casino. He told the young man that the machine hadn’t paid out for some time….and that maybe today would be the lucky day. At that time, the Megabucks slot machine hadn’t actually paid out for nearly one year. We should also point out that this machine was based on the largest network progressive jackpot in the world.

Initially, megabucks had seeded the machine with $1 million in 1997 and then again, but with $10 million in 2005. But back in 2003, it had a starting seed of $10 million. If you add all the $3 per spin that was put into the slot over almost a year, then the prize was a massive $39.7 million when our young man went to play. He said to himself, that he would allow $100 to play and no more. It was some silly fun for him as he wasn’t a gambler. He just was following his uncle’s advice for no particular reason.

How Does the Megabucks Slot Machine Work?

Before we go on with our story, let’s first take a look and see how a Megabucks slot machine actually works. The Megabucks slot was originally put on the market in 1986 by its manufacturer, one of the best jackpot game providers, International Games Technology (IGT). At this time, all slots machines were “static” meaning that they were standalone machines, where each machine’s kitty and payout were based on the monies fed in. But IGT revolutionized the whole industry with the idea of linking machines together. These then became progressive jackpot lotteries. This would also increase the jackpot total. So, if a player was playing a slot in Reno and another anywhere else in Nevada, then all their monies would go towards just one pot.

Over One Year Since the Last Payout

This “wide-area progressive slots” idea was an instant success. Players were transfixed on the machine’s meter, showing the prize rising to seven figures. In fact, you could watch the meter climb every day, as the odds were very very long on the possibility of winning the top prize. The actual Megabucks slot machines were very simple in design. There were none of these multiple pay-lines and expanded reels that you find on today’s machines. It was just three reels. You 43 was to send these spinning. They each featured the traditional symbols of sevens, bars, and cherries. All you had to do was line up three matching symbols on a single pay-line.

All the current features on any slots just hadn’t been invented then. So there were no free spins, no scatter symbols, and certainly no video clips and wacky sound effects. It was just a simple no-frills slot machine, albeit with a massive jackpot. By the way, the game’s jackpot symbol is a “Megabucks Eagle” which shows the company’s distinctive logo. Now the odds of landing just one eagle are 1:368. And the odds of landing all three, and thus winning the jackpot are 1:49,836,032. It’s for this reason that the prizes go unclaimed for lengthy periods of time. And it’s this combination of long time periods between wins and all the $3 which are continuously being put into these machines, that allows the main prize to reach such epic proportions.

Megabucks was a constant in the news of the time, as huge jackpots were won.  For example, a record-setting $27.5 million was won by a lucky player in 1998 at the Palace Station. Then another record jackpot fell to a cocktail waitress playing at the Desert Inn in January of 2000. That record-breaking amount was $ 34.9 million. And here we are, three years later, as our anti-hero sits down to play.

So, with just $100 to his name, our young man would of gotten only 33 spins. Yes, it’s true you can play the Megabucks slot machine for both $1 and $2. But you need to be placing the maximum wager of $3 in order to have a chance at the main prize. This player was maybe born lucky as he was to later reveal that he had three sevens on his birthday. Without any jackpot winning strategy and yet within those thirty-three spins, the young man watched in wonder as those three Megabucks symbols lined up. And, in the blink of an eye, he’d beaten odds of nearly 1: 50 million and won nearly $40 million.

Megabucks Slot Machine: The Winner is Still Collecting His Winnings

Interestingly enough the winner chooses to take his prize in yearly installments. This is a rare way of doing things. Many winners are concerned as to whether the game provider company, who has to pay the prize will be in existence in the next 10 years. Never the less, he decided on 26 installments of $1.6 million each year. From today, he still has another $15 million to collect over the course of the next 10 years. The winner wisely chooses to stay anonymous. He gave a statement, “I’m still stunned; it doesn’t seem real yet. But both of my parents are still working, so some of this money will go to fund their retirement.”

Largest Megabucks Jackpot Ever – And By a Long Shot

There was a confirmation from the vice president of IGT, John Sears, that the jackpot of $39,713,982.25 was the largest ever. “This MegaJackpot is nearly $5 million more than the previous world record slot jackpot amount of $34.9 million – this one goes into The Guinness Book of Records.”

Everyone was happy to see the jackpot finally find a winner. But there was also disappointment for many that the prize was now back to $10 million. For many hard-core slot players, the win was a bitter-sweet moment. The Las Vegas Sun newspaper did a series of interviews where they inquired as to the feelings of other long term slot machine players. Kim Wong from Kailua told the paper, “I was here at lunchtime around 12:30 and it was still around $39.7 million. Then I came back around a quarter after one and it was resetting. It was such a drag. It was a little more enticing with the $39 million up there. But I’m still playing.”

A certain Judy Selasky from Lavonia, Michigan told a similar tale. Saying that though a record payout was off the table, she and her husband would still play in hopes of a “lightning strikes twice” type of moment: “I said, ‘Hurry up and get up to the room, so I can get downstairs. I figure if he won, there might be some magic here. I’m not a hog.”

Las Vegas is a city that appears to only deal in excess. As we said at the very beginning, go big or go home. Well, this young computer programmer for LA did just that. And for many gamblers, knowing that someone was able to win such a huge prize, gives them the hope that one day, it could be them. Especially when you consider that 16 years have passed since that fateful day. And since then, though many jackpots have come and gone, still no one has come close to that record amount of cash. Check out our casino jackpot guides.