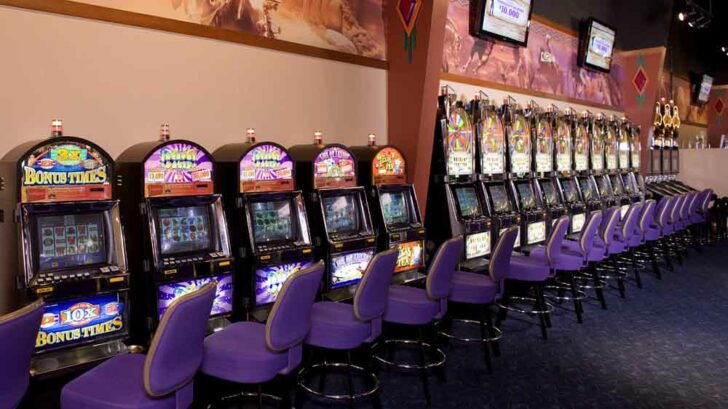 Are Online and Land Based Casinos Really at War?

Whether you play at online and land based casinos, you have to admit that online gambling has made the whole process of playing casino games so much easier. You can be sat at home, in your jammies, snuggled up nice and warm on the sofa, with your phone or laptop perched up on your knees, finding the best casinos to win the jackpot. Surely it doesn’t get any better than that! Though it’s been slow and painful progress, we are seeing more and more states start to license online gambling. After all, it’s a nice extra source of taxes.

But there are any self-interested parties that aren’t so quick to jump and allow punters to gamble online. They see this new technology as a threat to the status quo. On a more practical side, they see these new online casinos taking jobs away from their bricks and mortar counterparts. Their view is that there’s being a war waged between the older schools and these new young internet upstarts, between online and land based casinos.

Why the Belief That Online Casinos Will Topple Land Based Venues?

You can probably guess which side of the fence the Chairman of the Las Vegas Sands Corp stands on. Sheldon Adelson is one of the main voices of alarm over the future of traditional gambling. It’s as if he really believes that online gambling is almost inherently evil. To that end, he’s got together a coalition to fight. It’s called the Coalition to Stop Internet Gambling (CSIG). His problem is that it appears that the actual figures involved are not as dire as e would like. And in the end, you can’t help but feel his opposition is merely a smokescreen for enlarging his own land based casino empire.

One of the main partners at Macquarie Capital, Chad Benyon, has stated that internet gambling will “cannibalize $25 – $50 million dollars” in revenue from New Jersey based casinos. But his overall point was that there would be an injection of between $200 – $300 million extra coming into the state. So even subtracting the amount mentioned as cannibalization, the state still comes out happily ahead.

Differences Between Online and Land Based Casinos

You might be surprised as to just how many casinos, spread all over the US and the rest of the world, are in fact owned by the same company. And so it is with Sheldon Adelson. His empire of casinos stretches from Las Vegas to Macau. Though there is a certain saving of scale financially from having so many similar establishments, online casinos really do knock the stuffing out of bricks and mortar ventures. The first being the obvious overheads associated with a huge wage bill every month. The fact that online entities need to make no spending on maintaining premises, often with a five star hotel attached means that they can be leaner and meaner in their operation. Instead of massive utility bills, there are just some servers and an office to operate out of.

The savings made by having very limited employees is a massive difference to the running cost bottom line between online and land based casinos. If we take Adelson’s The Venetian in Las Vegas as an example, it employs around 6,000 workers. That’s a monster payroll. A company that operates solely over the internet will need programmers, developers, marketers, and customer support….but the numbers are minuscule in comparison to a large casino. This lowers the total operating cost and allows the online casinos to be much more flexible during a market downturn.

Of course, in any business, profit is king. But land based casinos often keep increasing their house edges just to maintain a healthy profit. The problem is that they want more but don’t give any added benefit to the customer. Yes, we already know that they are in need of massive sums just to stay afloat. That’s why most casinos are filled to the brim with jackpot slots machines. These typically have a very low return to players, often ranging from 88% to 94%. If you go online, then you’ll find plenty of slots offering between 95% to 97% RTP. Even with the table games like blackjack, roulette, and jackpot poker, they offer more to the player.

This is another measure that’s in place in order to cover the higher operating costs. Well, that and the need for ever-greater profits. It affects all jackpot games. Your average casino slot machine will need a minimum bet of $0.50 to $3 in order to hit the reels. But an online casino has the minimum bets set at a tiny $0.01 to $0.5 per bet. Real casino table games normally have minimum wagers set at $10 to $25 per bet. For online table games, you’d be hard pushed to find anything more than $1.

Well, this is a no-brainer and probably the biggest difference between online and land based casinos. You don’t need to move your fat arse and get in the car. Just pull out your smartphone or tablet and you’re good to go. And that’s from anywhere. And it’s this ability to take the casino anywhere with you, that beats any of the competition.

Because their overheads are technically zero, online sites can afford to let you play for free. As such, as there are no dealers or doormen, they”re not losing any money. Also, online casinos will let you test out the games before joining. Then once you’ve registered, then you’re free to wander around the site and play many of the games for free to get the hang of them.

The Reality: Online and Land Based Casinos Complement Each Other

This has been our thinking about this issue. It’s silly and self destructive to take a side in a war between online and land based casinos that’s non-existent. There are aspects of each that can, if used well, complement each party. Kevin Smith, CEO of Boyd Gaming, said that online gambling helped increase his company’s bottom-line income. It took nothing away from it. Smith owns and operates the Borgata and started to incorporate online sites as far back as 2014. He said that the internet business only bought profit and there have been zero detrimental effects to the core bricks and mortar business.

“These results also once again demonstrate online gaming’s potential to expand our business,” said Smith. “About 85 percent of our online players have not had rated play at Borgata in at least two years, showing there is little overlap with our land-based business. Online gaming is growing our database, creating a long-term opportunity to market Borgata to an entirely new group of customers.”

Tom Ballance, who’s the COO of the Borgata, said, “In January, Borgata launched a mobile gaming app for iPhones and iPads, and we are scheduled to roll out a version for Android devices shortly,” Ballance explained. “As Borgata expands into mobile gaming, we believe we will further grow our business and the overall market.”

Conclusion: The Enemy is Stagnation

Right now online gambling is supplementing the income for the traditional industry players. It’s not taking money out of the pot, but rather adding to it on a daily basis. Perhaps a real problem that starting to be noticed as it appears on the gambling horizon. And that’s simply too much competition. The fact that we have both traditional casinos and now so many online possibilities, means that the customer is spoiled for choice. Gambling is already pretty saturated in the US. That’s because states have been allowing more and more casinos to set up shop in the hope of getting more tax dollars out of them. Sure, it works. But only to so much of a degree.

With more of the big players starting to concentrate all their resources online, we will initially see the mixed earnings from both online and land based casinos rise. But then, customers start to get mighty thin on the ground. It starts costing you more to acquire a customer. And before you know it, you’re losing money. The enemy here is not whether online or offline works but rather looking towards the future. The enemy is stagnation thanks to saturation. It’s coming.