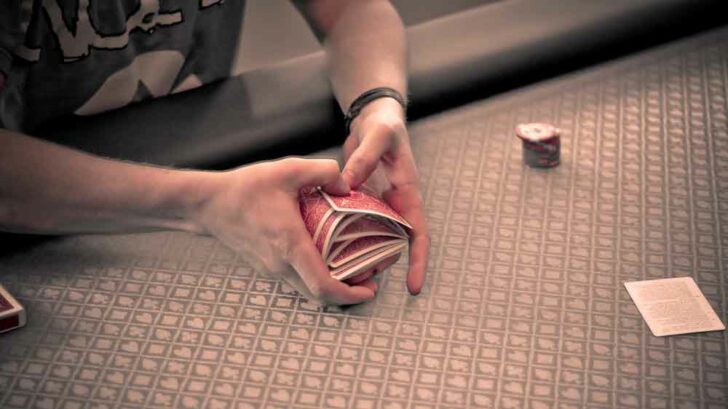 The Gambler’s Fallacy: Let’s Disprove it!

Now here’s something that will drive all logical people nuts; namely “The Gambler’s Fallacy”. Step into any casino and watch the way many punters bet. You’ll see that they are always concerned about the number of colors that came before. It’s as if these previous results will and can have an effect on the upcoming results. It goes by many different names. These include “The Fallacy of Mature Chances” and “The Monte Carlo Fallacy”. But whatever it’s called, it still appears to have an iron-like grip on the mentality of many gamblers.

The Gambler’s Fallacy: What Is It?

Essentially, the Gambler’s Fallacy is the belief that one random event will affect the outcome of yet another random event in a game of independent events. It’s true that there are certain games, like blackjack for example, which could be said to have a “memory”. This alludes to the fact that as the game is being played, the nature or composition of the cards making up the deck, is also changing. But we’re not discussing this. We’re looking at games like roulette. In this game, every spin of the roulette wheel is an independent event. Whatever spins came before can be of absolutely zero effect on the proceeding spins. In other words, the past events have no effect on the probability of future results.

We all know someone who goes to the casino on a regular basis. We have a friend, an older woman who likes to play on the jackpot slots machines. She claims that she has a strategy, though we should point out that in all her years of playing she’s never won anything. Never the less, she’s the eternal optimist. First thing, she only plays the same machine. She is certain that the longer she plays the machine (and we’re already talking years here) the greater the chance of having a win. That’s because she believes that after a certain time, then a hit is “due”. You can suggest that she should play all the machines, but she’s having none of it. And that’s because she is a typical example of someone who believes in the Gambler’s Fallacy. Maybe it would help if she knew how a slot machine works.

The Gambler’s Fallacy: How a Slot Machine Works

OK…Let’s suppose that you’re standing in front of a slot machine, at the best casino site to play, with three reels and 10 symbols on each reel. So that means that each of these symbols has a 1/10 probability of being seen. Now, in order to get the probability of a specific symbol coming up across all the reels and at the same time on the pay-line, then you’ll be needing to multiple the probabilities together.

Therefore we can see that whenever we spin the reels in the hope of winning, we actually have a 1/1000 probability of getting that winning combination. Here’s the important bit: every time you hit the button and spin, it’s the same numbers going through the same process. Therefore it’s exactly the same probability of having a win. The actual formula has not changed. And it’s not as if the slot machine has a memory and remembers what came before. Each result is random, and previous results will have no effect on its next result.

The Gambler’s Fallacy: A Machine Can’t Catch up

Another weird way of thinking about jackpot slots is that many gamblers believe that a machine that’s paid out recently, will not be paying out for some time to come because the machine “has to catch up” with the theoretically predicted pay-back percentage. But it’s really necessary. Over the long term, the difference between the payout odds and the odds of winning are taken care of. This neatly brings us to another phenomenon, The Law of Large Numbers.

What About the Law of Large Numbers?

Some people will quote this back to you as a means of disputing The Gambler’s Fallacy. And at first glance is does contradict the Gambler’s Fallacy. It states that the more trails you make, then the closer to the statistical or mathematical result you’ll get. But the thing is, it’s more complicated than that. You see, though this law might suggest your results will “probably” get closer to the predicted results, the problem with it is the sheer size of the number involved. The point being that the large numbers in question, are so large as to make the result of the next spin have a minimal effect on the overall averages.

Here’s an example. You make 100 spins on the slots machine. This is still “short term”, as any spin can heavily skew the average results per spin. Now once you’ve reached a total of over 100,000 spins, then your results will be starting to look like the average. Keep in mind that if you win on a probability of 1000:1 on the 100,001 spins, it will not have much effect on the overall average. That’s because the numbers are too big for any individual result to have an effect.

What About the Gambler’s Fallacy and the Game of Roulette?

If you want a game that’s going to disprove The Gambler’s Fallacy, roulette is a great example. Many of the jackpot games “systems” of play actually stem from The Gambler’s Fallacy in the first place. If you bet on a single number on the wheel then it’s very easy to calculate the probability of having that number win. You simply compare the number of ways to win with the total possible outcomes. So, for example, you bet on the number 17. The wheel you’re playing on has 38 numbers. So the probability of seeing your number win is 1/38. In fact, the probability of any single number on the wheel winning is exactly the same, 1/38. So even if you make the same bet the next round, the probability will remain the same.

There Are No Hot or Cold Numbers

The world is full of books about strategic betting. And they all peddle a formula that sells books as opposed to making the author rich by playing his own advice. One such author is Frank Scoblete. He would have you look at the previous numbers in the mistaken believe that if a number has appeared more than others, then it’s a “hot number“. But this way of thinking is foolish he might of well preach the opposite, that the number is now “cold”. The probability is always the same, as there are 38 possible outcomes to your one number. If a number was removed from the wheel after each spin, then that would change the probability.

How Do Betting Systems Try to Use the Gambler’s Fallacy?

We’ve already written a lot about the Martingale System, and so you’ll probably already know our thoughts about this. The martingale is a system normally something you might see at the roulette wheel. The idea behind it is that you double your bets for every time you make a loss. The thinking is that just as with the Gambler’s Fallacy, your time will eventually come “due” and you’ll win everything back. So, imagine that you’re simply betting on red/black. You’re already bet 7 times on the black and each time was a loser. But surely betting on the 7 once more, will be a win as it’s “due” for a change to red.

The trouble here is that the punter has forgotten that he’s not betting on getting a black eight times in a row. What he’s actually betting on is whether the ball will land on the black the next spin. as there are 38 numbers and 18 of them are black, then the probability remains exactly the same at 18/38 or 47.37%. The real problem with the Martingale System is that you’ll run out of your bankroll before your result comes through. Or you’ll have reached the table limits allowed at the casino. It’s probably one of the worst jackpot winning strategies ever devised. And yet we see players still using it.

The Gambler’s Fallacy: The Paroli System

You can look at this system as being the almost polar opposite of the Martingale. Though it doesn’t work, it’ll be good for your gambling knowledge base to know and understand it when you see others using it at the games table. With this system, you simply double the size of your bets after each win. Just like the Martingale System, the Paroli doesn’t work. It’s based on the idea of “hot” or “cold” streaks. So with the latter, when outcomes get hot, then you’re taking advantage of them by letting your bet ride.

These systems simply don’t work because they are not grounded in reality. There’s no such thing as hot or cold outcomes. if any of these systems really worked, then casinos would either ban them or go out of business. And you’ve never seen a player backed off for using the Martingale, that’s a certainty.

Conclusion: The Gambler’s Fallacy Is Bunk

Having a belief in the Gambler’s Fallacy is probably the number one mistake that so many gamblers make. Of course, it’s easy to get sucked into this way of thinking. After all, if you toss a coin and call “heads”, but for nine times in a row it lands tails, then it’s only natural to make the assumption that a head is coming next. Somehow we feel that it’s “due” heads. But we forget that probability doesn’t work like that. Each time there’s a toss of the coin, there’s only a 50:50 chance of one side or the other.