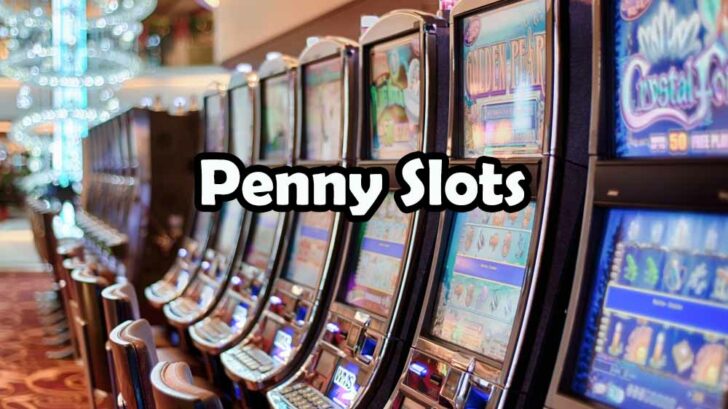 Taking a trip back in time and you’ll find that the most common slot machines were those that took nickles. Then in 1960, the slot manufacturing company, Bally, invented the innovative machine which was called, the “Money Honey”. Now, this really was a penny slot machine, though it could be played with five coins simultaneously. These multi-line coin machines were a massive hit with all players. This was in spite of the fact that they were actually paying more each time they pulled the level.

The New Penny Slots Offer Extra at a Price

Today’s’ slot machines offer all the bells and whistles you would expect to find on an electronic machine. There are theme songs from your favorite TV shows, movie clips, bonus screens, and special payouts. But all this added entertainment comes at a cost. Yep, they charge a lot more than a penny! For example, the Japanese games manufacturer, Konami makes a couple of games called “Race Driver” and Beat The Field”. Both of these slot machines require a minimum of 50 coins to get started, which is equal to one $ per spin. Other manufacturers have machines you’ll need to be feeding with over 100 coins a spin. With up to sixteen rows of reels to play, that works out at around one $ and fifty cents each and every spin, or 1,600 pennies!.

The slot machine manufacturer, IGT does offer a penny version of the popular game, “Megabucks”, the standard version of the same game will only take $1 amounts, but you’ll be needing $3 just for one spin. Funnily enough, on the new “Penny Megabucks”, you’ll have to put in around 300 coins per spin, which is then about the same as the other machines from the same stable.

The Odds Are With The House

Of course, playing all these slot machines is great fun and can be quite addictive. But in order to qualify for the bigger prizes, then you’ll be needing to up your game in terms of your spending. It’s important that you read the payout tables that are on every slot machine before you start playing. This way you’ll know what the minimum wager is in order to claim any jackpots. There’s no sinking feeling like hitting the jackpot and then being paid out, not in huge sums of cash, but in a small number of free spins.

For example, if you’re playing a 25-cent video poker game, then you’ll be needing to play with five coins in order to qualify for the 4,000 coin flush. So that actually works out as $1.25 per spin. Now on most penny slots there are bronze, silver and gold payoffs. But in order to qualify, you can end up putting over £2.50 to $5 into the machine per spin. And those amounts can quickly add up.

The Psychology of Small Payoffs

People used to think that casinos were the work of the mafia. They’re not 100% wrong, but the casino, it’s games designs and floor layout, all owe more to the humble psychologist than to the burly goon. Yes, humans are essentially creatures of habit. In fact, habits in themselves can make us feel more secure. So when a player consistently receives even a small payout, such as when playing penny slots, his mind fills up fill dopamine, and he thinks he’s the world’s greatest winner. The mind is really tricking him. And that’s why, the casino will always be the real winner.

It’s in the nature of the design of penny slots that they pay out a little but very frequently. This is what lures the punters in. Blinded by the fun and excitement, they often don’t realize that the pay out is less than the wagering. Because the amounts being fed into the slot machine are relatively small, then it’s easy for the player to feel at ease. The machines themselves are also designed to help with this mental process. Whenever there’s a win, no matter how small, the slot machine erupts into cacophony of bells and whistles. In all that excitement, the punter never stops to think that he has played $100 to win $18.

And that’s why we always recommend that all players play responsibly. Even if you choose from one of the online jackpot sites. Penny slots are by design, a method of luring you further into the casino. And into games that cost much, much more. So whatever you do, don’t forget that you bankroll is not Monopoly money. It’s real cash! For example, you budget $200 for the casino and then play a penny slot for 250 coins a go. Well,  then your bank roll will be run down a lot faster than you thought. And you don’t get as many spins as you might of believed. There will not be enough spins to make a difference in your odds of coming out a winner. Before all your cash is over.

Whilst thee’s no playing strategy for enjoying penny slots, there are some means by which you can make sure you are still having a good time after playing them. One of the most important is to choose a slot machine with just a few lines. Or even better, just a single coin for each spin. As we always mention please take a moment to read the help screen to see exactly how many coins are necessary for the minimum jackpot. The main take away is to go and enjoy yourself. Yes, we know the name of penny slot is a misnomer, but with a handful of pennies, you can still have a blast.