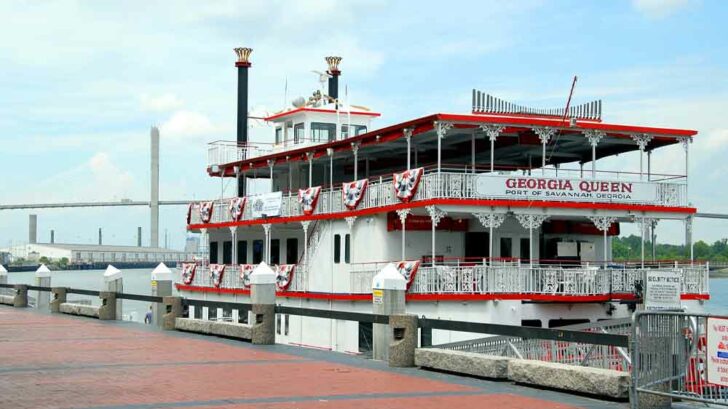 Have you ever been riverboat gambling? We’ve all seen the old photos of these majestic looking paddle steamers making their way up the Mississippi River. In fact, it’s probably considered an image that pretty much sums up the golden age of the Wild West, once it was tamed. But things have moved on a bit since those days of gun-toting cowboys and Stetsons. Though gambling may have advanced in some areas, like the internet, it doesn’t necessarily follow that this holds true of every state in the US. For example, did you know that some states still require that all gambling takes place on a riverboat? Sounds crazy…so let’s have a look.

The origins of riverboat gambling are pretty straightforwards. As the West was expanding, many merchants had to travel considerable distances in order to both maintain and find new business. Back in the 1800s, they made use of the extensive waterways that zigzagged across the eastern seaboard to the mid-west. so traveling by boat was the norm. Unfortunately, this form of travel is also exceedingly time-consuming.

Essentially we had a bunch of rich folks, with lots of time on their hands, and all stuck on a boat. So it’s no surprise that riverboat gambling quickly became the best method to pass the time. And of course, the smell of easy money brought professional gamblers to the party. Soon any number of shady characters could be found gambling on these boats. But laws were changing, and many states were actively outlawing all forms of gambling. At the same time, there were a great many people complaining about the card sharps. Soon lynch mobs sprung up to dish out “justice” to card cheats. It was all getting out of hand.

Riverboat Gambling: Caught In The Middle

So, with the police on one shore and the lynch mob on the other, it’s no surprise that riverboat gambling felt a lot safer whilst remaining on the waterways. These boats gave an opportunity to the very best card sharps to practice their trade with impunity. But times were a-changing, and it was only a matter of time for things to change thanks to the introduction of the railroads. Overnight, the riverboats became redundant for traveling purposes. But the story doesn’t end here.

States are always on the lookout for means of raising their own taxes. And all states were looking westwards and seeing the sheer amounts of cash pouring into the coffers of the State of Nevada, thanks to it’s relaxing of gambling laws allowing all types of jackpot games. And so, it only natural that they too, wanted some of that action. So states that were on the Mississippi River began to think again about utilizing those paddle steamers as floating gambling casinos. This would create an important source of additional state revenues. So, with the stroke of a pan, laws were changed and those boats were recommissioned. Well not quite.

The thing is that though they might be called riverboat gambling casinos, the “boat” bit can be a bit misleading. Often they really have nothing in common with a real boat. Most of them are just floating structures, which happen to be parked on the waterway. They do appear to be floating, but we wouldn’t be surprised if they were not built up from the river bed itself. When these new riverboats first appeared, it was when the idea of gambling once again was starting to take it’s first baby steps. As a result, gambling laws were extremely restrictive. Most boats had a $5 betting limit and there were rules as to how much a guest was allowed to lose on a single trip.

But the 1990s saw a major change in gambling laws. Things became more relaxed and as a result, revenues increased for casinos, which in turn led to states gaining more as well. As of today, riverboat gambling casinos to win the jackpot operate in 6 states, Louisiana, Mississippi, Iowa, Missouri, Indiana, and Illinois. But that doesn’t mean that they all follow the same laws. For example, in Louisiana, all casinos must actually look like the old river paddleboat steamers and have their own engines. Then again, not all river states have even joined the gambling party. So Kentucky, Arkansas, Wisconsin, Tennessee, and Minnesota have no river casinos at all. It’s really strange that voters wouldn’t want the extra income that gambling brings.

It goes without saying that riverboat gambling had has a positive impact on both local level and state budgets. For example, in Indiana, all casinos have to pay a 20% state tax. Of this, 15% goes to the state and the other 5% remains in the local community. Just so there’s no doubting the numbers involved, this translates to a staggering $400 million to the state and $80 million locally. In fact, more tax money flows into the state from riverboat gambling, than from any other source. And it, not only tax money that’s important. These huge floating monstrosities need workers. They need to hire dealers, waitresses, accountants and security, and more.

And the vast majority of these workers are going to be people who live locally. As a direct result, this increases the amounts of money going into local communities, as workers are spending salaries in shops and stores where they live.

When WinStar Came to Thackerville

A great example of this effect would be what happened in Thackerville. This was a quiet backwater of a town with few inhabitants and just the river flowing slowly by. it’s the type of young that young people look forwards to escaping from as soon as high school is over. But then WinStar World Casino decided to plonk a massive riverboat gambling casino there. Before you could say “bingo”, Thackerville was suddenly on the map. The casino started to instantly pull thousands of tourists in from all over the adjoining states. Not only that, but it created literally thousands of jobs. The town had gone from being a sleepy village into a bustling town in less time than to spin a roulette wheel.

This casino is familiar to all gamblers who go to Las Vegas. In fact, it’s been a gambling institution for many years now. It’s situated on the shores of the muddy Mississippi River. It has all the luxuries you’d expect from a historic casino in Vegas. There’s a spa for relaxing in after a hard day at the slots. These, by the way, are all joined together to create a local progressive jackpot of around $80,000.

If you’re not a high roller, but want the high roller experience, then look no further than the Casino Queen. This is a relatively small casino floating on the Mississippi. There are just 8 gaming tables, which is tiny when you think of even the smallest venue in Las Vegas. But what they lack in table games, they certainly make up for with jackpot slots machines. There are a staggering 1,100 machines to choose from. But the main feature that makes the Casino Queen so outstanding, is the staff. You’ll be hard pushed to find a more courteous and helpful staff as they have there. The level of service is second to none.

Just a short 40-mile drive going west out of Chicago, and there you’ll find the Grand Victoria Casino Elgin. A medium-sized venture, it has 36 games tables. And a whopping 1,000 slot machines to help increase your jackpot winning chances. But the casino isn’t just famous as a riverboat gambling venue. The owners place great emphasis on giving back to the community via various outreach programs. In fact, this being the highest-grossing casino in the state, it still manages to give away a huge part of it’s profits to the surrounding communities. So, if you happen to be playing there, be happy in the knowledge that part of your losses is going to good causes.

By their very nature, riverboat casinos can’t compete when it comes to the level of luxury found in land-based casinos. But what they don’t have in glitz, they certainly make up for with charm. And that’s a timeless old-world charm that’s hard to duplicate. Though these river paddle boats don’t actually move (thought here are some that do), there’s still a decidedly old fashioned feeling from gambling on the river. We suggest that they’re great to visit and play in, if nothing but for the change and the experience from your regular land-based casinos. You’ll be glad that you did.