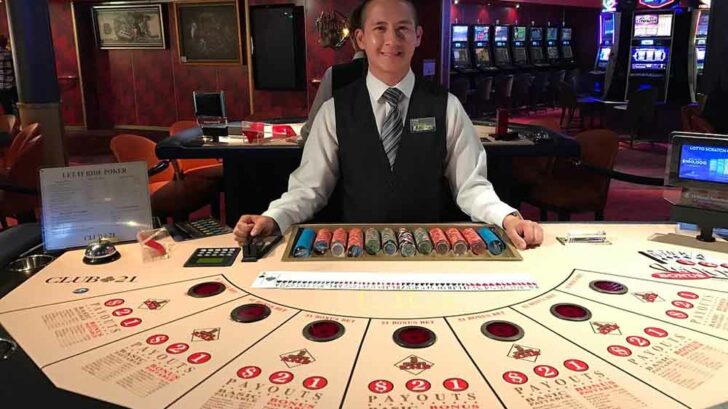 Casino dealers certainly know a lot of secrets. Some while back, a glossy US magazine who’ll remain nameless for this article, conducted a number of interviews with people working within the casino business. The idea was to get “behind the scenes” so to speak and see what really goes down in Las Vegas. Some of the results of this were both disturbing and surprising. Of course, these workers all have the equivalent of front row seats to all the action that goes down in a major casino. So brace yourselves, as some of this isn’t pretty!

Relive your casino stories at the King Billy Casino

You have to keep in mind that casinos are no longer the domain of the wealthy and the cultured. Today, they will let in anyone, no matter how well or not they’re dressed, just as long as they have a few dollars which they’re prepared to lose. As a result, many casinos have their fair share of customers with personal hygiene issues. Though on the surface, a casino might look perfectly clean and sparking to the untrained eye, it’s actually the polar opposite.

Most casino floors are seething with grime, dirt, bacteria, and everything else undesirable. But much worse than that is the state of the seating. You see, some players don’t want to bother getting up to go to the toilet when nature calls when they’re playing on the jackpot slots. That’s right, they just do the do there where they’re sitting. A casino worker from the Mohegan Sun casino reported that the casino had to bring in a special team to deep clean the seats following a number of these scenarios.

Dealing Cards Can Be Dangerous

With many gamblers playing jackpot games with money they can often ill afford to lose, emotions can run pretty high. And if at the end of the day, everything goes south for the player, it’s not uncommon for them to look for something or rather, someone to blame. And, no prizes for guessing who cops that? That’s right, the casino dealers. This can lead to some very awkward and potentially dangerous situations. One croupier talked about a headstrong player who became very belligerent after a serious of losses. After storming out of the building, he later returned with a bottle of gasoline, which he tossed over the dealer, threatening to set the poor casino worker on fire. Though this isn’t typical, it’s extreme with many other lesser but equally horrifying threats and promises of psychical harm thrown into the ring almost every day.

You Never Know What to Expect

In the casino, it’s not just gamblers who can cause problems. One dealer recalls working in a large casino in Las Vegas. Whilst working at the blackjack table, a customer stood up to remove his jacket. Of course, this was an unnecessary break in the game, so the other players were rolling their eyes at the players unprofessional attitude. But that wasn’t the end of it. Under his jacket he revealed a 3-meter snake, alive with its tongue flicking in and out. Everyone dived from the table. Needless to say, the customer and his reptilian friend were quickly escorted from the building. Still, we imagine it’s a great gambling story to be retold by those at the game.

The Consequences of Losing Can Be Serious

Maybe you’ve had a bad day at the casino. Your jackpot winning strategies haven’t worked.  Then you’ll probably chalk it up to bad luck. Maybe you’ll go and drown your sorrows over a drink. But whatever you do, within a couple of hours the loss has been forgotten and you’ve moved on to whatever obligation or task comes next. But for some gamblers, their brains are not hard-wired to let things go so easily. For them, the very act of gambling is akin to some life or death situation. This idea that it’s all or nothing. They can’t move on, for one reason or another. And yet they have completed depleted their bankroll and so have no other option than to go home.

Unfortunately, losses mean different things to different customers. It all depends on whether you budgeted for gambling, or were just winging it in the hope of striking big. So many gamblers don’t know when to stop. And they end up losing everything. One of the casino dealers tells of a player, an ex-cop, who became extremely agitated after a series of losses. Whilst still sitting at the games table, he pulled out a handgun and took his own life. Though you can’t blame the casino for such a random act, they do bear some responsibility to ensure that players are not overstretching themselves to the point of self-destruction.

Casinos are businesses, and their sole purpose is to make money. Not do any social good. It could well be argued that casinos are the polar opposite of social good, in that they bring problems like addiction, money laundering and crime to the fore. Yes, we know, you go to the casinos to win the jackpot. But if you happen to gamble away your inheritance or steal from your workplace to play the slots machines, don’t go expecting a sympathetic ear from the casino management. You bet it all, so you deal with the consequences.

One casino dealer told the story of a Korean gambler, who was destitute after literally losing his shirt at the poker table. He had no more money and therefore had nowhere to stay. So, the dealer asked his manager if there was anything they could do. The manager looked at him as if he’d asked the world’s most ridiculous question. The manager said it’s not our problem and walked off. In the end, the dealer was able to find the number of the Korean Embassy and sent the punter to that office.

The Range of People is Fascinating

If you’re into people-watching, then there are few places on the planet where you’ll see such a huge assortment of different types. As long as you have a couple of dollars in your pocket and a willingness to take a risk. Then the casino is always there to welcome you. One of the casino dealers spoke of dealing with an Arab Prince in one moment, then Jay-Z then next and finally a semi-homeless man. They were all the same inside, looking for a thrill on the way to a win. Many locations will cater to a certain class or genre of people. But casinos are rather like McDonald’s in that you can have bankers rubbing shoulders with tattoo artists and everyone in between.

High-Rollers Get It All

In the real world, many people feel that just by having money, means that you can more or less, do exactly what you want. The laws that affect mere mortals have no effect on you. Well, they’d be right. It’s true. And if you really want to see it in action, then look no further than your big casino. One dealer we spoke to, explained that these ultra-rich high rollers could behave in any puerile manner they so chose. He remembers them throwing handfuls of chips at him whenever they lost. Behavior that would have a lesser man escorted off the premises. But the casino will bend over backward to ensure that these grown babies are catered to in order to keep them gambling.

Drugs, prostitution, along with free everything is on offer for certain clients. There are secret lifts leading to secret rooms that are all for their benefit.

Yes, the Casino Dealers are Judging You

You can be sure that all the casino dealers and other staff are making a judgment call about you the second that you step onto the gaming floor. And why the interest? Well, it’s not because you’re good looking. No, they are trying to suss out if you’ll be a good tipper. Remember that these staffs are mostly on minimum wage, and rely on the generosity of the patrons to be able to pay rent and eat.

Not All the Winners are Gamblers

Because gambling appears to be about easy money, with it’s an easy come and easy go, then it’s no surprise that gambling attracts other twilight professions that follow in its wake. Like feeding seagulls follow the fishing trawler. For many gamblers coming to Las Vegas for the first time, they are blissfully unaware that their every move is reported on. So the taxi that brings you into town from the airport would, through genial conversation find out some basics about you. They will then pass this information onto, say, working girls. The doorman will pass on tips to taxi drivers. And the whole show is carrying on behind you back and yet you have zero ideas.

If a punter wins and then gets drunk, be sure that this fact is passed on to an attractive woman, who will waylay him on his way out. Of course, he’s expecting something else but ends up falling asleep in his hotel room. She then goes through all his stuff and fleeces him for both cash and credit cards, which she’d pass on to an online credit card dealer. The thing with Vegas is that everybody, and we mean absolutely everybody, is on the make.

At the End of the Day, Casino Dealers are Babysitters

The casino dealers job is not quite as straightforwards as just collecting, turning, and then dealing cards. Apart from these things, they must keep an eye out for cheaters. As well as keeping their playing emotions under control. It doesn’t matter when you see a customer make the most idiotic move. You can’t say anything or show any emotion. One dealer suggested that looking after a gaming table was no different than babysitting a bunch of adults at a daycare. He said that clients got into fights about the pettiest of things. His job is to try and humor everyone. He also said that the job can be very stressful at times.

Casinos are a huge melting pot of languages, cultures, and dreams. As for the players, there is any number of different characters playing their roles at any one time. Dealers believe that they don’t get enough credit for holding the gaming floor from falling into chaos. They not only have to operate the casino games, but also ensure that every player feels involved and happy. We suggest the next time you go to a real money casino, make sure that you address the staff respectfully. And always leave a generous tip!