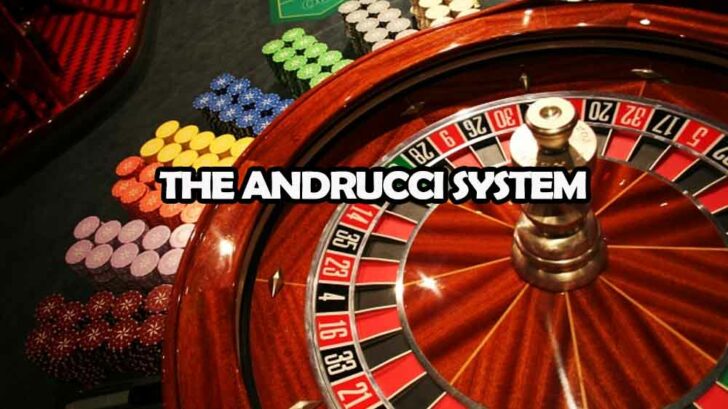 It should be pointed out that all of these systems are pretty much worthless. They all force you to take on too much risk. But with the Andrucci system, there are some major differences which might give it a chance of proving of some value both in landbased casinos and on the online jackpot sites.

What Is the Andrucci System?

Essentially it’s a system that revolves around what’s known as “Chaos Theory”. The idea is that seemingly random and chaotic events can have some sort of underlying pattern. Now, in theory, roulette is a completely random game. Having said that, if the ball falls consistently in line with chaos theory, then the thinking goes, there might be a pattern to be exploited. Using the Andrucci system requires that you watch the wheel a certain number of times and record the results. Using this information you then place your bets. Though we all know that the roulette wheel only produces random results, this system presupposes that the results are not as random as we might first think.

Here are the steps for using this system:

Record winning numbers for 30 to 37 spins.
Check the results to see which number(s) has won the most.
Make a single-number bet on the most popular number(s).
Continue wagering on this number for 10-37 spins or until you win.
Start over and begin recording numbers again.

So, you can see that there are a number of variations in the number of spins you need to record. Traditionally, the system needs you to watch the wheel and record it’s results over the period of at least 30 spins. But gamblers being a superstitious lot, tend to swear that you’ll need to wait at least 37 spins. That’s one spin for each number of the European wheel. Some players like to stick with their “hot numbers” for at least 37 spins. Also with this system, you’re supposed to place only straight-up bets on your hot numbers. If you do hit, then the payout is at 35:1.

Here’s An Example Of The Andrucci System In-Play

You observe results for 30 rounds.
You see that 14 has won four times—the most out of any other number.
You place straight-up wagers on 14 for the next 20 spins.
You can see that this strategy isn’t difficult to use or understand. The only real work involved is recording all the numbers before you begin gambling.

What’s the Premise of The Andrucci System?

Over time, on a perfectly balanced roulette wheel, the results should even out with the ball falling into each hole the same number of times. Now over time, roulette wheels begin to suffer from wear and tear and can develop the slightest tilt. We call these “biased wheels”. A regular casino will test its wheels on a regular basis in order to ensure that they are completely flat. But sometimes you can find a warped wheel before the casino does.

The Pros of the Andrucci System

When comparing this system with others, it’s important to note that it’s unique in a number of ways. First off, it combines observation with strategy. It’s also quite flexible in comparison to others. Another point is that it relies on straight-up bets, something not found elsewhere with roulette. So, though the risk might be greater, so are the possible rewards. technically, you need to win at least one bet in every 30 spins of the wheel.

As the roulette wheels age, they can start to favor certain pockets over others. The problem here is being able to spot them. Though there’s a bias, it’s going to be pretty small. So you’ll need to record a lot of observations before being able to predict with any accuracy. But the Andrucci does give you a small window of opportunity.

Though the house edge on roulette is pretty rubbish, it continues to remain a popular casino game. After the initial excitement, the game can get a little stale. The Andrucci system can certainly liven things up a bit. Instead of just making totally random bets, you now need to watch the wheel like a hawk. And you’ll need to keep looking for a least 30 spins before making a wager. Being a straight-up bet, you’ll be hoping for a substantial payout.

The Cons of the Andrucci System

Let’s face the fact that this is just yet another “betting system”. And you already know that we have little time for any of these. Buy stepping back a little let’s see what the downsides are, objectively.

Straight-up bets are all well and good for taking a larger payout, but they come at a considerable cost. Because they roll at 36:1 on a European wheel and 37:1 on a US wheel, there are going to be extremely long periods of winning nothing. To that end, this system is not for you unless you happen to have a huge bank roll sitting at your elbow, otherwise, you’re going to run dry before a win.

Though this system is meant to help detect wheel bias, the sample size is impossibly small. The wheel would need to be pretty dysfunctional in order to see it’s tilt in just 37 spins of the wheel. Also, these wheels only break down very rarely. And even if the machine is somehow “biased”, you’d need to spend considerable time recording all the action to find a common number.

Rather than being able to relax and play along, this system requires an eye constantly focused on the numbers coming up as the wheel is spun. Then you’ll be needing to make specific bets according to that information. This form of “wheel tracking” can stop some players from enjoying the gameplay. To that end, they find it hard to relax. Imagine being so fixated on the wheel for around 30 spins before you place a bet. It can get real tiring real fast.

The Andrucci System: No Proof

Here we come to the proof of the pudding. There isn’t a roulette betting system that doesn’t have those praising it to heavenly heights. These fans will swear by it (though they don’t seem to be doing all that well at the roulette table). In truth, the Andrucci system offers zero proof that it works in even the slightest manner. On the other hand, we should look upon it as trying to find wheel bias. But rather just as a means of fun.

Should you use the Andrucci?

Wait, what? Do you still have to ask this after reading this article? If you think it sounds like fun, then go ahead and knock yourself out. It’s just as random as playing the wheel normally, though it may bring some sense of order to a disordered world. It’s certainly entertaining until you tire of staring at the wheel or use up your whole back roll in a matter of minutes and need to leave the premises. This is not a strategy if you want to see any profits. For that, we suggest learning another game altogether, blackjack.