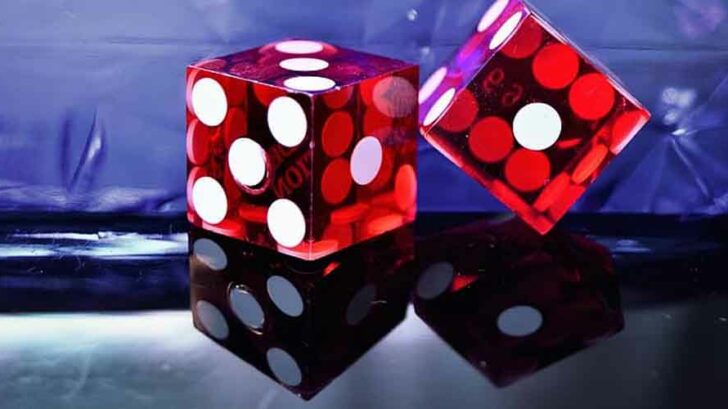 Dice sliding in craps just sounds like a load of crap! Because however, you look at it, craps is just a game of sheer luck. Essentially, you toss a couple of dice and have then hit a textured wall at the end of a long table. Even with the toss being totally random, the tint triangular structures on the wall also act to inject more randomness. In fact, the game cannot be played with any sort of skill. There is no advantage play to be had. You can find the rules of craps here.

But there are always clever players who think that they can somehow manipulate the dice. They can control the throw and ensure the dice land with a certain number facing upwards. And they have a point. It is possible to gain an edge by sliding the dice instead of throwing them. This technique sounds full of promise. But you need to be aware that it features one huge downside.

What Is Dice Sliding and How Does It Work?

A normal game of craps involves throwing a couple of dice down a table and onto a wall. The dice then roll back down and come to a stop. It’s all totally random. But dice sliding is designed to counter this random element. The object of this to stop the dice from rolling. Hopefully, the dice will end up in the same position with which they started.

You make a pass line bet.
Place the dice so that a four and three are facing upward.
Slide the dice down the table.
The cubes come to a stop in their original positions.
You win thanks to “rolling” a seven on the come out.

There is some considerable skill needed to ensure that the dice don’t roll. If you happen to make them tumble, then your bets could be lost. It all take a lot of practice. Some would-be dice rollers actually set up a homemade craps table so they can practice as if they were in the casino.

The Only Way to Consistently Beat Craps

Sliding the dice is the only method by which you can surely generate a profit in craps. Keep in mind that craps isn’t really a jackpot game. But you need to use this in combination with a strategic betting plan. there are some serious profits to be made with exotic prop bets. An example would be a bet on 12 pays 30:1. In real life a bet on 12 is asking for trouble because, though it might payout at 30:1, it also carries true odds of 35:1. That’s a horrible 13.89% house edge. But imagine if you could approach the 12 bet with skilled certainty. keep in mind that you only have to keep 1 of the 6’s upright after 3 rounds to take the casino to the cleaners.

We suggest that in order to disguise your efforts, you mix up your bets with both low and high odds. If most of your wins are via low odds, then the chances are that the casino will leave you in peace. If you want to know how to play legit craps, then head over to our craps guide.

Because you’re not bringing anything other than your dice throwing skills to the table, the casino can’t really accuse you of cheating. And some gambling authors see dice shooting as a perfectly legitimate means of beating the casino. There are two methods; dice sliding and dice shooting. The actual throw begins with “setting” the dice. This means positioning the dice so that the required numbers are upwards. With the slide, you spin one or more of the dice, using centrifugal force to keep the top face facing upwards.

Controlled shooting is a very different kettle of fish. With this, you toss the dice as normal. The idea is to control your actual throw enough to produce the desired results. Though it might look like a completely random toss, it’s not and has come about through hours and hours of training. Practicing the toss and the release. You want to develop a smooth motion that ensures the dice barely touches the back wall. This will reduce the chances of the dice “kicking off” the back wall. And thereby increase the odds of turning in your direction.

As far as dice control is concerned, there are those who claim that the skills required are similar to those a professional athlete would obtain after years of training. The problem with this slightly silly view, is that there’s absolutely no proof that dice control actually works. No one has broken the bank at a real casino by using this trick. In fact the only money being made by it’s proponents, is that taken from gullible losers at dice control workshops and seminars. You are actually tossing the dice during dice control. A toss down the craps table with a bounce off a heavily textured wall mean there’s actually zero control. It reminds us of those karate masters who claim that they can defeat an opponent by using their own energy against themselves. Deluded is the word that springs to mind.

On the other hand, dice sliding really does work. You can find any number of Youtube videos which explain the technique and demonstrate the move in action. But here’s the rub; dice sliding is illegal. And that’s in every state. You see, dice sliding is the only sure-fire way in which you can beat the casino at craps. If the craps stick-man sees you sliding the dice, you’ll get a warning. And if you continue to slide, then you’ll be backed off, and asked to stop play or/and leave the casino. When we say illegal, it’s actually written in the law! You know, like driving on the pavement or when drunk. Casinos have a lot of political clouts. The law is phrased in a way that by sliding the dice, you are attempting to defraud the casino. If the security cameras catch you sliding whilst the table crew isn’t looking, then you’ll be considered to be a cheater and committing a misdemeanor crime.

It’ll Get You Banned

Many players who attempt to cheat, sorry, slide, will often work with an accomplice. One will distract the table crew whilst the other gets busy sliding those dice. In 2011, a couple of professional poker players, Veronica Dabul and Leo Fernandez did exactly this at the Wynn in Las Vegas. They managed to win over $700,000 for their combined efforts. But later, after the Wynn had viewed the security footage, they were both sued. Though the suit itself made a lot of noise in the media, no resolution was ever published. We suspect that they got away with it, as a court case would provide massive publicity for the art of dice sliding, along with the fact that, to be truthful, they were playing within the rules. But we’re going to take a wild guess and say that they are probably both banned for life from all Wynn casinos.

Remember That Everybody Is Watching Everybody

Of course, with the table crews, pit bosses and the eye in the sky security all watching you every move, it’s not so easy to pull off a dice slide. So what some clever players do is just slide one of the dice. You hold both dice on the one hand. As you release them, you let the first dice be tossed, while the followup dice is slid. Of course, it means that one of the dice is of little value to you. But you can still make a decent profit from the other dice. You just have to choose your bets more carefully. The great thing about this technique is that it’s difficult to tell if any dice sliding is actually taking place. One of the dice with a tumble. The other will merely spin around one axis. But, it’ll appear as a random toss.

Should You Still Attempt Dice Sliding?

If dice sliding was perfectly legal, then you can be certain that casinos would never even feature the game of craps. A skilled player would break the bank in a few hours. To that end, dice sliding is considered to be illegal. We doubt that they’ll call the police though, as they don’t want to be seen as prosecuting players who were really just playing the system. In the same way they back off card counters. If you’re caught dice sliding, then the worst that can happen is that you get to meet the casino security personal as they throw you out. If the casino can prove, without a doubt that you were dice sliding and/or using some technique to try and mask the fact, then you’re actually breaking the law.

So, should you go and buy some dice and start to practice at home? And once you’re feeling competent, should you make your way to the local casino and try your hand at dice sliding? Well, on the one hand, we think it would be great fun. But on the other, with all the technology and employee’s eyes who’ll be watching you after your first win, then it’s probably not such a good idea. You’ll have the table crew and the pit boss start to take an interest the second you score. Keep in mind that the casino can review the security footage later.

The game of craps is a purely random affair. You toss the dice down a table and they bounce off a textured wall. There’s absolutely nothing you can do to control the way the dice will land. But, you do have a greater chance of ensuring your desired numbers are facing skywards with dice sliding. Essentially, that’s all you’re doing, having the dice the required numbers upwards, and then spinning them down the table, ensuring that they barely touch the back wall. The technique is not difficult to get the hang of, and with a it of practice can produce reliable results. The real problem is putting this to use in a real casino.

It makes us smile to think that casinos, you make every conceivable effort to make money from players, should then have any legitimate means of actually winning against them, marked as illegal. What a bunch of babies! Still, that’s the law and if you flout it, then expect to be asked to leave the premises. The casino will not call the cops and have you throw in jail, as we can see from the previously mentioned high profile case involving that couple of Argentinians. So, if you’re off to the casino to win the jackpot, then it’s mighty tempting to try it once,. We say, then go ahead. It’ll be fun whatever happens!