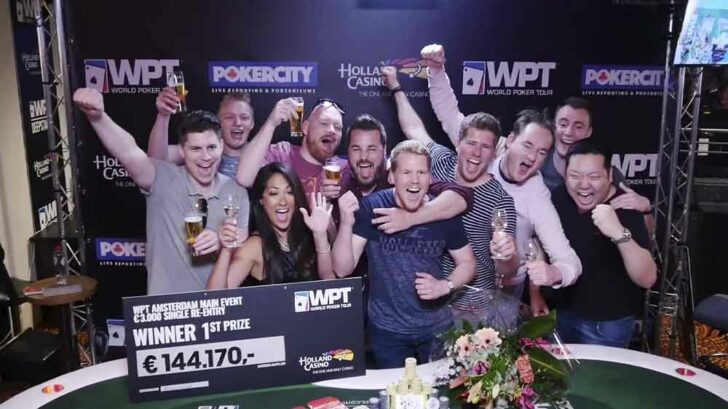 This is the question in the back of every gambler’s mind. After all, many are not just playing for the fun, but also with the idea of going home with some extra cash. To finally be one of the successful casino players. Of course, playing against the house edge means that the majority of players go home with empty pockets. That being said, we all know that there is any number of successful casino players who regularly make huge bank at the casino games tables. Because they are consistently good winners, it can’t just be down to their good luck. Let’s have a look at some of the world’s most successful casino players. Keep in mind we didn’t say that they beat the casino fairly!

This guy became one of the most successful casino players at the slot machines. But he had an ace up his sleeve. You see, he was actually the guy whose job it was to test all the slots machines in Nevada to make sure they fulfilled the state licensing requirements. So he really had a head start over everyone. Harris was a professional gambler in his spare time and so got to visit all the casinos both as a software engineer and as a player. Working alongside an accomplice, they managed to beat the 1 million to 1 odds and win a monster $100,000 jackpot at the Bally Casino in Atlantic City in New Jersey. It turned out that he used his knowledge of the Keno machine’s random number generator and was able to duplicate the calculations of the computer chip.

From this point he was able to predict the winning combinations. To avoid any suspicion, his accomplice would go to the casinos and make the winning combos. It all ended in tears after a raid on his hotel room turned up all the equipment necessary for the scam.

Rather than scamming his way to hundreds of thousands of dollars, LoRiggio used pure skill. His game of choice was the craps table and he perfected a way of throwing the dice so that he could be certain of the results. He became known as the ‘The Man with the Golden Arm’ and ‘The Dominator’. He spent countless hours practicing to perfect his technique. This involved throwing the dice so that the two “stuck together” as they traveled through the air. It was important that the landing against the back stop of the table was as gentle as possible. He later trained a team of players, whom he nicknamed “Rosebud”, and they all went to work on the Las Vegas strip, becoming hugely successful casino players with their way of throwing the dice.

Later still, he felt that having a team of players was restraining him, so he teamed up with one of Vegas’s biggest gamblers, Frank Scoblete. Together, they used his technique to relieve the casinos in Vegas of some serious change. As time passed, casino’s started to identify players who were using “controlled throws” and either forced them to “back off” (leave the premises) or change their throwing style. Today, LoRiggio runs a “dice school” for both budding and professional and successful casino players.

During the 1950s and ’60s this woman was the most successful casino player of all casinos across Las Vegas. She made thousands of dollars from playing at the blackjack table. Her “specialization was called “hand mucking” and “coolers” and involved a simple sleight of hand trickery. Essentially she would surreptitiously add or remove a card she had concealed at the games table. She was an attractive young woman and had a certain charm about her that meant whenever she was caught, she was able to bluff and charm her way out of trouble. Over time she became something of a legend. You have to remember that this was a period before any real camera security in casinos.

After many years as a great successful casino player, she was finally arrested by the FBI. But, thanks to her charms, she spent not a single minute in jail but was released on probation. This was the message for her to stop. And she retired gracefully into obscurity.

Colavcchi’s particular skill wasn’t gambling. It was making exact replicas of the coins and tokens used by casinos. He would then use these in the slot machines in casinos all over North America. These duplicates were so good, that they were more or less the same items as those used in casinos and no one had the faintest idea what he was doing or how he was winning so much. He totally ruled Vegas on a trip there before law enforcement even knew a crime was being committed. Finally, after years of being one of the most successful casino players, casinos started to notice that after this one particular player turned up, there would be a huge excess of tokens on the books.

Eventually he fell to the FBI, but avoided any prison time in exchange for a plea deal in which he showed them just how he manufactured the tokens. It’s guesstimated that he made around $500,000 over the course of his career.

Probably the most famous of all casino scammers, and the most successful casino players ever, the MIT teams took every casino they entered to the cleaners. Immortalized in movies, they used math and theatrical tricks to scam casinos out of millions on dollars. These were all students at The Massachusetts Institute of Technology and they all studied card counting. Today, thanks to movie stars like Ben Afflick, we all know about card counting and how to use it to beat the house edge. But back then, we”, it was all black magic. These students and professors actually advertised for players across the campus. They all had to learn, not only card counting but each was to play a character once inside the casino.

They would spend days perfecting their individual roles as it was important that they appeared to be strangers to each other. Using coded words at the table, and counting cards, they were able to amass a result of over $5 million over the course of a couple of years. They actually were so good that they were able to acquire financial investors. In fact on their first outing in Las Vegas, they cleaned up with winnings of over $400,000 in just that weekend. But all good things must end. And so it came to pass that they became more and more familiar to casinos they visited. And so they gradually let the whole operation wind down.

Richard Marcus was a trickster in it’s truest form. He was probably one of the most successful casino players in the history of casino games. It all started with a gambling addiction that saw him living under a bridge. Later he worked in a casino as a blackjack and baccarat dealer. It was here that he formulated the seeds of an idea that was to make him exceedingly rich. He named his roulette strategy “Savannah” and its simplicity is mind-blowing. He would only bet with low denomination chips, like say, $5. This was to avoid any kind of attention. Now, if he won, then he would jump around filled with pure joy. For the dealer, this would be slightly disturbing, as Marcus had only placed a tiny bet. So what was all the excitement over? Well, here’s the tricky part.

At that point Marcus would show the dealer, that under those low value $5 chips, there was a $500 chip. Marcus used an extremely difficult sleight of hand maneuver. Conversely if he didn’t win, then he would quietly remove the hidden high-value chip. The point is that the casinos are more concerned with wins than losses. Because this movement focused on the losing bets, his play went unnoticed. Though this successful casino player was eventually caught, the $5 million he made was more than enough to keep him happy. He also wrote the best selling book about his exploits. In it he makes the claim that he’s still involved in casino cheating. But he has formulated such a good technique that he’ll never be caught.

Edward Thorp is the father of card counting. Being a mathematics professor as well as having a Master’s degree in physics, meant that mental agility was one of his stronger points. Though he had never gambled or even visited a casino, an old friend took him to the blackjack table in a casino. Sitting there, playing hand after hand, he became transfixed with the idea that the game was “beatable”. Using a primitive computer, he was able to simulate the gameplay. As he experimented, he came to realize that there was a mathematical advantage waiting to be played. He saw that the smaller cards were more advantageous for the dealer and when they remained in the deck, the advantage shifted to the player, meaning that at that point they should increase their bets. It would give him over a 5% advantage over the house.

Because no one had any idea that such a thing as counting cards was even possible, he and an accomplice were able to take on every casino they entered and win big time. Of course, he wasn’t cheating. Just playing the system. It took some time for casinos to realize that he had devised a system of card counting. Before long he was forced to play in smaller and smaller casinos. He later went on to write the best selling book, “The Ten Count System”. This was later to be put to an almost industrial means of generating cash by the MIT team. Later still, after being one of the world’s most successful casino players, he applied his knowledge to the stock market and made a fortune. Finally, he was inducted to the Blackjack Hall of Fame.

Before you try your luck to be a successful casino player, some practice at the online jackpot sites can be useful. Read the Winnerama Casino Review to learn more about one of the newest operators on the market.