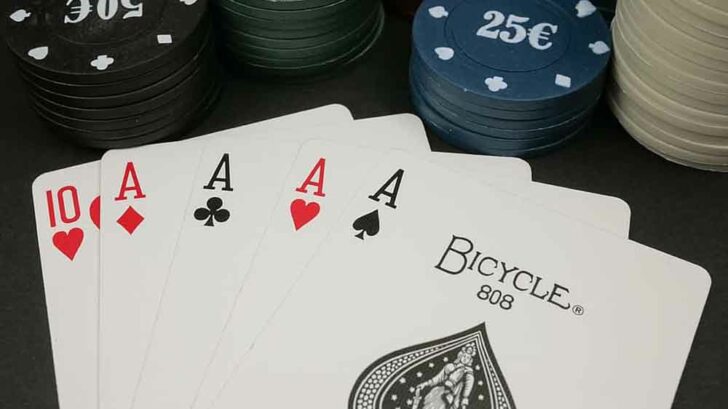 Waiting for the Sun to Shine

The term actually comes from the days of pinball machines. The most frustrating thing would be for the steel ball to fall straight down between the flippers. By physically tilting the machine you hoped to change the ball’s direction and thereby stay in play. Falling into tilt can manifest itself in a couple of ways. The most obvious sign of an impending tilt is when you see a player start to enter pots with only marginal hands. Obviously they’re hoping to hit a monster on a later round of betting. Of course, not all players will go tilt with this. But this is always the beginnings of speculative play, something every poker player knows they should steer well clear of.

Remember that against an opponent with any skill, you’ll struggle if your game has become too predictable. But when those plays are done in an unhealthy state of mind it means that you are starting to rely more on luck than skill. Whatever you’re feeling we can sum it up with one word: frustration.

Tilt at Poker: The Pain of Letting Go

Frustration is defined as: “the feeling of being impatient or angry because you cannot do what you want to do”. You need to be self-aware to be able to identify your underlying emotions. And when you’re playing poker with other players at each elbow, you need to be able to control those emotions so that they don’t spill out onto the table. This all will depend on your level of emotional intelligence. But if you can’t get a grip, then those emotions will start to affect your game. And not in a good way either.

The Most Common Reason Why Players Go on Tilt

Poker is a game that really only focuses on the results. The dealer will ask the player, “What do you want to do?” The player is not so concerned about what he presently has. But more so about what comes next, and in particular, what he wants to get. But the game also has the added element of luck. This makes it all too easy to blame a bad card on your bad luck. You can lose a lot of your chips in just one hand. And when you do, it’s enough to push you over the edge into tilt territory. But there’s a fine line between being focused on results and being attached to them. It’s a line that many players cross during the course of a game.

But attachment is what makes it difficult to maintain emotional stability. And that’s one thing you really do need to play poker. Unfortunately, it appears that most players can only learn at the cognitive level. For them, they really need to try and develop a habit of seeing their results from a larger perspective. Having said this, maybe for some players that’s still not enough to stop them from going full tilt at poker. They should probably spend some more time looking inwards.

If you’re serious about improving your game, then you need to develop a serious of positive habits. We suggest that you start with reading books, joining some online forums, and watching YouTube poker tutorials. Start to track how much time you’re spending playing, both online and off. Take time to analyze your gameplay. Why did you play that, and what could you have done differently? Then there comes the part where you need to ensure that you, the player, are in excellent shape. Pay attention to what you’re eating, do exercise, and get enough sleep. The idea is to build a newer, stronger, lighter poker playing machine. And you should be working on anything, mental or physical, that’ll give you even the slightest edge at the games table.

Of course, the danger is not in these activities in themselves, but more importantly, how you as an individual relate to them. If you do all these things and build yourself up to be an excellent poker player, then it could be argued that frustration will be even more pronounced. You’ll be falling from a greater height.

When It Seems That There’s Nothing More to Polish

There’s a state of mind that we can call the “scratched car syndrome”. Essentially, a guy buys a new car. He loves it more than words can say and spends his days lovingly polishing it. Then one day, for whatever reason, the car has a large scratch on the driver’s door. After noticing this, the owner promptly fell out of love with the car. There are plenty of poker players who suffer the same. All it takes is a simple misjudgment. And suddenly that player feels a though the whole session is ruined.

So we have two examples of players who find themselves becoming frustrated because of some form of attachment. The one is only concerned with amassing as many chips as possible. And the other is attached to their self-image as a tight and excellent poker player.

A Third Type of Tilt

Sometimes you can go full tilt at poker, not because of a bad hand dealt, or a poorly played hand. Sometimes there are other pressing issues filling your head. This is the third type of tilt worth mentioning in passing. This is where an external problem or something unrelated to the game is going on in your life. Personal problems can certainly inject themselves into your gameplay. If your mother is ill. Or you had a recent altercation with another player. Problems are everywhere. If it’s something that’s simply insurmountable, then we suggest that you call it a day and finish the session.

No one is immune to the actions going on during a game of real money poker. It’s super stressful. And yet at the same time can veer off into the realms of exhilaration. The secret to avoiding going full tilt is to work on an accepting attitude. Most tilt at poker comes from simple frustration. You have to learn to stop wanting things to be different from the way they really are. Hopefully, through self-improvement and self-development, you’ll get there. There’s an old medieval prayer that goes: “Give me the strength to accept want I cannot change. And the strength to change what can be changed. And the wisdom to see the difference”.

Want more? Check out our directory to the best site to play poker.