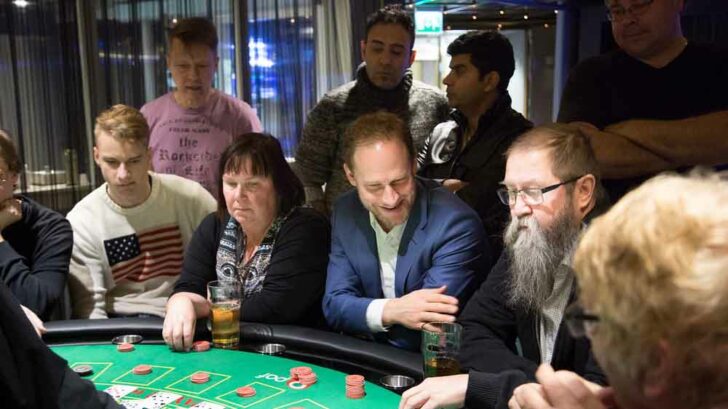 Go into any casino and you’ll see as many players at the blackjack table as you will at the poker table. Yet for some reason, blackjack has never really fired up the imagination quite like the way that poker does. Though poker players take their game very seriously, those who play blackjack tend to be viewed as more hardcore gambling enthusiasts. it was back in the mid-2000s that we saw several blackjack TV tournaments come about. And though at first, it appeared that televised blackjack was on the up and up, it eventually petered-out with more of a whelp than a roar. The public just wasn’t interested.

The very first major televised blackjack event was the World Series of Blackjack (WSOB). After it launched, several other channels wanting in o the action. Here are the shows. The show aired from March 15 2004 until August 27 2007, thus spanning four TV seasons.

This was to be the longest-running blackjack show. It ran for over four seasons, from March 15 2004 until it’s final show on August 27 2007. The announcers were the blackjack legend, Max Rubin, and the MLB announcer, Matt Vasgersian who provided the running commentary. The contestants were there by invitation, or some could earn their place via smaller tournaments held around the country. To make the game more TV-friendly, some interesting new rules were introduced. These included the “Burger King Power Chip” and the “Knockout Cards”. With the former, a player can switch a card with the next card in the shoe. And with the latter, the Knockout Card eliminates whoever was holding the lowest chip count in that moment.

The show invited various celebrities including the likes of Penn Jillette and Caroline Rhea, who were both playing for $1 million in Season 4. Alice Walker, who was a poker champion in her own right, won the final round and picked up a prize of $500,000 with her jackpot winning strategies.

This show, which like the above aired on the Channel GSN, never made it past the pilot. It featured a single event that took place at the Las Vegas Hilton (now the Las Vegas Hotel and Casino). It’s hosts were the actor John Fugelsang and author Ben Mezrich. A total of five players competed for $17,000 in prize money. It was called the “World” Blackjack Tour because each player came from a different part of the globe. This one-off event was one by the Mexican player Sergio Segura, with runner up prize going to Canada’s Henry Tran. The original idea was to take the show and tour casinos around the country. But, as the pilot was never picked up, the show was canceled.

Another short running show which only saw two seasons before the chop, this show was probably the most memorable. It featured celebrities playing in small tournaments, with the winnings going to charity. It’s host were Vasgersian and actress Alex Borstein and actors such as Jason Alexander, Billy Baldwin, Dean Cain, Shannon Elizabeth, and Rhea. Rhea was able to win season one and gave $100,000 to “Much Love Animal Rescue” and “Project ALS.” Season two was won by Alexander, who ended up giving the prize money of $300,000 to the “Oakwood School Capital Campaign.”

This show aired via syndication for a year in 2006/7. The sponsor was an internet poker site called UltimateBet. This tournament format was different from previous shows in that it was essentially a knockout tournament, called Elimination Blackjack. Invented by 1994 WSOP champion Ross Hamilton, players were systematically eliminated throughout the game show. many of the participants were either professional players or authors. Amateurs could qualify from around the US by playing in satellite competitions on the UltimateBet site. And once again, the every present Max Rubin, along with Matt Moralejo did the honors as far as commentating and introducing the guests. Nikki Ziering who was a Playboy Playmate and Miss USA, Shandi Finnessey were there to lend glamour and a helping hand.

Though the show appeared to be gaining an audience at the beginning, this was mainly down to UltimateBet milking the publicity for all it was worth. By the second season, it was toast.

What Was the Promise of TV Blackjack?

You have to remember that this was the beginning of the period when TV poker was on it’s rise to popularity. In fact, UltimateBet’s success in Poker was a big help them to go forwards with their blackjack show. All these blackjack tournaments were more or less direct copies of jackpot poker shows featuring famous gamblers, celebrities, and some pretty serious prizes. UltimateBet’s Elimination Blackjack was a first and was really a combination of blackjack and Texas Hold’em poker.

Yet in spite of all the effort put into these shows, none of them really took off. The public just couldn’t get behind them and so they were dropped from scheduling very quickly.

There were a number of different reasons as to why TV blackjack crashed and burned.

Even though both blackjack and Texas Hold’em poker are very easy to both play and learn, the public perception was that blackjack was a difficult game to master. Texas Hold’em is straightforwards, with no knockout cards, Burger King Power Chips or any other special factors that would affect gameplay. There are just two hold cards with betting rounds and the community cards.

As for blackjack tournaments, they are equally easy to play. But the appearance was everything. Many viewers had an automatic aversion to these games as they couldn’t be bothered to look into them further. So, in some ways, these failures can be placed at the feet of a lack of education into the card games being played out.

Find all the BlackJack Strategies at one place!

The popularity of TV poker peaked at around 2006. Starting three years earlier, the poker boom coincided with the introduction of televised blackjack. Keep in mind that the Unlawful Internet Gambling Enforcement Act (UIGEA) came into effect in 2006. This was the law that banned online gambling businesses from taking payments in many states. As a direct result of this, many payment processors simply stopped doing business with US-based gamblers. Many online poker sites struggled after that.

Because TV blackjack was closely aligned to poker from the start, when this new legislation ended the poker boom, then the writing was on the wall for televised blackjack.

When you think about it, you’ll see that blackjack is one of the most popular games in the casino. But blackjack tournaments are a relatively recent phenomenon. Unlike poker, tournaments for blackjack just never took off. Even in the casino, most players prefer to be playing against the dealer and the house edge.

We’re going to hazard a guess and say a firm “no, they can’t”. They are a thing of yesteryear, and their star shone brightly for a brief period and then petered out. TV works around advertising and/or sponsorship. And there have been zero companies coming forwards to re-ignite interest in the game. Maybe there’s some potential for blackjack on the TV, but no one seems to be in a hurry to bring yet another blackjack based show to the marketplace. More especially as the boom has passed us by.