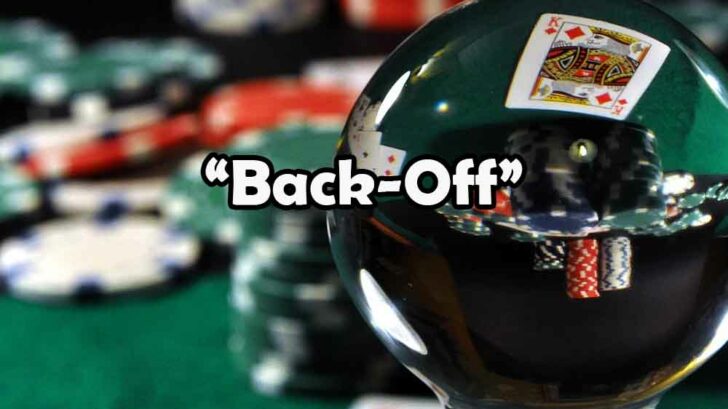 In the whole of the US, you can count cards in Missouri and suffer no real consequences. OK..they don’t ask you to leave the premises, but you can’t continue playing either. But if you were to be caught out in any other US state, things might not go quite as gently. Many people find it hard to believe that you can be kicked out of a casino simply for playing well. If you’re a successful player, then the locations where you can play will just become more and more limited. The problem is that once you’ve acquired the knowledge to win, you want to put it into use. But in the casinos, the pit bosses are trained to spot your techniques…and then you’ll be asked to leave. Or play a fixed shoe for all rounds. This is called the back-off.

Time To Be Leaving The Casino

Many top player have been asked to leave the premises in their early years. This can be either politely or with a heavier hand. Some players remember being surrounded by security who were demanding their ID. Then they were followed out the door, across the parking lot, and halfway down the street. Other players speak of managers and pit bosses who have come over, shaken their hand, and congratulated the player on being such a great blackjack player. The next sentence is to say that the blackjack tables are now off-limits. Or you have to stick to a fixed low bet for every shoe.

Now, if you’re counting cards, then you know it. There are certain betting patterns that go along with counting cards, and it doesn’t take the skilled eye of the pit boss to spot these. The first part of the back-off will be the security guard or pit boss asking for your ID. Remember they have absolutely no reason to do so. So if there’s a random approach from either security or the management, then there’s only one response. You should decline and say you were just in the process of packing up and leaving. At this point, you should get up and head for the exit.

You don’t want to give them your ID. Why not? Well, if they have seen you playing “advantage play”, they can put you into a database of advantage players. This gets distributed to many of the larger casino chains and businesses, and is, to all terms and purposes, a blacklist. Keep in mind, that even though you are standing on private property, you have no obligation to hand over your ID. it’s exactly the same scenario as if you were standing in Walmart. Don’t create any sort of scene. Remember that you DON’T want to be remembered. “I was just leaving” is all you have to say.

So is there a way of avoiding the back-off? We’re afraid not. It comes with the territory of being a good player. You can never avoid it. At some point, someone’s going to notice your playing style and you’ll feel a heavy hand on your shoulder. But there are some ways you can mitigate becoming a casino persona non grata.

Minimize Your Time at Each Casino

This is a kind of hit and run strategy. You want to play for enough time until your maximum bet is reached during a high count. Then get your ass outta there! Regardless of the result, don’t hang around. Though this method will not lead to you maximizing profits, it will lead to longevity. This works well in an area with many casinos all within driving distance.

Avoid being a regular on just one shift at the casino. So on the one day, play the graveyard shift and on another day, play daylight. Oh…and avoid playing when the pit bosses change shifts, as that’s when they pass on relevant player information to the incoming crew.

Remain as Anonymous as Possible

You want to avoid being rated. To that end, don’t give out your name and don’t get a players card. Your job is to stay under the radar. It’s true that some casinos will let you play for much longer if you get rated. In this case, it’ll be your lifetime win that’ll give you away. So, approach each casino on its own merits.

If you have friends who are also advantaged players, then there’s no harm in networking with them. They can spill the beans on which casinos might be more tolerant and which ones will cut off your hands if you start playing with more than $100 per hand.

Back-Off: Be Aware of Your Surroundings

As you’re playing, keep one eye on your surroundings. If there’s a group in the pit deep in discussion and they keep looking over at you, well, you can be sure they’re not discussing last night’s Game of Thrones. If you can avoid a back-off by having your eyes and ears open, then you might be able to pay the same venue again, but at another shift period.

Have a Good Back Story

This can help in many ways. Some players act drunk. Others wear a name-tag from a convention that’s in town. Make it believable and most of all, don’t oversell it. Do some research and you’ll be able to pretend that you’re just passing through. With luck, they won’t look at their local back-off list of banned players.

This is not you dressing up in the latest army issued clothing and painting your face green. It’s about the way you play. Now most players just are not good enough to warrant camouflage. But remember that the house edge is 1 – 2%, and if you throw that out the window, then it’s going to be hard work to win anything. So, don’t “over camouflage”. Keep it small. Restrict it to places in the game where you can afford to take a loss. An example would be a shoe ending with your bet $300 out. Don’t start the next shoe on $10. You’ll need to show some consistency, so start on at least $100. Better still, we suggest that you find another table to play.

If you are a great player and count cards, then expect the back-off once in a while. Whatever happens, you really must avoid being identified and blacklisted. Having the knowledge and skills to beat the casino is perfectly legal. And you have every right to take advantage of the casino’s weaknesses, in the same way, that they do with their customers. Anyhow, at the online jackpots sites you won’t get beaten up.