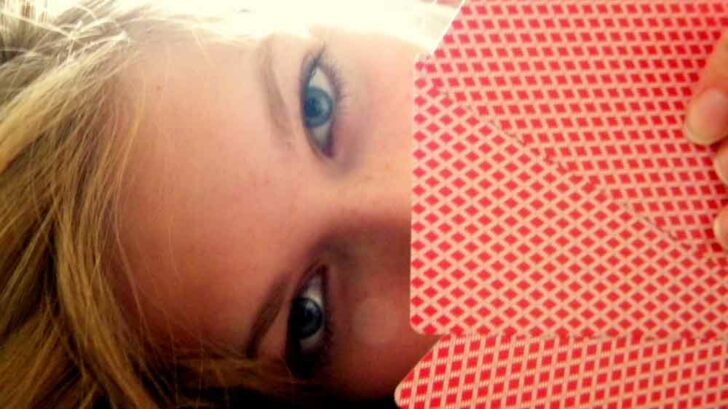 Lady GaGa sings about it. But does having a poker face have any bearing on the game of poker itself? On the whole, it doesn’t matter how you look, but you’ll still be welcome at any poker table in any casino. You just have to bring in some money to spend. But when all these shapes and sizes are sitting together at the games table, does having a poker face make any difference to the outcome of the game? Does it actually help you to hide bluffs and hidden motives?

What’s in a Poker Face?

So just what do we define as a “poker face”? By definition, it’s that blank and emotionless state which gives no indication of any emotions going on underneath. You could have the world’s strongest hand or the very worst one, but your expression betrays nothing. So why would playing with the visage of a vegetable or a robot be of any benefit?

Well, a poker face would stop you from giving away any clues as to what’s in your hand by what are known as “tells”. These are the small and sometimes insignificant ticks we have that can show when we’re under pressure. The touch of an ear (your own, not someone sitting beside you!) or scratching the nose being the most common. In psychology, it’s called displacement activity. When we can’t decide between “flight or fight” then the dilemma takes a physical form. It’s difficult to hide as it’s normally totally unconscious.

To have absolute control of the unconscious ticks that might come about thanks to being in a pressured environment would be something for Shoaling Monks to practice with. For us mere mortals, you can play up there features to create distractions and therefore hide your “tells”. If you have enough empathy or emotional intelligence then you’ll be able to grasp this concept and go with it. In this way, you’re inviting the other players to form an opinion about yourself….and it may not be true. Then you can play with their perception of you. And having a poker face is one of those tools for this that you have in your arsenal.

But having a poker face is not really just about your facial mannerisms and ticks. Your whole body language comes into the picture. So, whereas in the movies we see the player make an obvious gesture that’s meant to denote stress, in real life, just one tell isn’t enough. Your body parts don’t operate independently of each other. So though your facial signs can tell us something about your state of mind, make sure you look at the whole picture. Remember if we’re talking about these things in conjunction with real money table games, then you want to get it right or it could end up costing you a pretty penny.

No matter how good you think you are at hiding your emotions behind a poker face, you’re probably not perfect. And the tells are gonna tell! For example, our eyes dilate when we see something of interest when you’re playing jackpot poker. How can you go about controlling your own eye dilation? That’s more than mind over matter. No matter what you try, you can neither hide nor fake such things. There’s a reason why many top poker players wear dark glasses at the games table. Even blinking can show stress. But on the other hand, how can you identify whether someone’s blinking really means any of the things you might think they do?

When a Tell Is Not a Tell

The Poker author, Mike Caro claims that there are two types of tell. One is from an actor and the other from nonactors. An “actor” in poker is someone whose trying to hide a weak hand by acting strong and vice-versa. This, for example, would be a player signing loudly after hitting a set on a flop. Or going full tilt. Conversely if might be a player who smiles when they’re bluffing on the river. Reverse tells if you like. If you happen to be playing an amateur, then these are probably some of the first things you should be looking out for. But if everyone knows that everyone else is “double bluffing” then where’s the benefit? This is the problem. You have actors acting as nonactors. But having said that, most players are not that invested into a game to go to all these lengths. Most players just want to play and maybe get some winnings. Rather than maintaining a poker face, they want to chat and have some fun. Then again everyone has their own particular poker style.

But on the whole, it does no harm to pay attention to your opponents’ behavior at all times at the games table. And not just your own interaction with him or her. Watch how they deal with the other players as well. You want to be able to identify behavioral traits that are out of place or appear to be unnatural. Often you can relax a little and let your instincts take the strain. Deep in our psyche, we know when something is off-kilter.

How Far Can a Poker Face Go?

So, the question remains; do you need a poker face at the games table or not? On the whole, the answer is a resounding “nope”. Of course, it’s important to disguise your hands. But there is any number of ways of both giving and receiving information, that goes well beyond the scope of your facial expressions. Though we’re been speaking about tells, and though they may play some small part in your poker game, there is a much bigger red flag, that is much harder to hide.

And that’s your playing patterns. These will tell any onlooker your fundamental views on the game at hand. You can actually go from playing really well online to playing really well at the real casino. That’s not because you have learned about subtle human behavioral ticks. No, it’s simply because you have developed a greater understanding of the underlying fundamentals. And your betting patterns play a large part in that equation.

Mixing the Colors of the Palette

No matter what variant of poker you choose, betting patterns play an intricate part. More especially in a no-limit game. Remember that in a no-limit game you have the option of betting as much as you want at any time. Therefore a savvy player will be able to guess the state of your hand. It’s an even more dangerous situation if you happen to be playing Texas Hold’em because the other players will understand the pot odds. There’s a good reason why Texas Hold’em no-limit is so popular and is actually referred to as the “Cadillac of Poker Games”. In this game, you can bet as much as you want, and the game features 4 rounds of betting. That’s a lot of time to get to know and understand your opponents betting patterns.

At the end of the day, it’s not the action that matters, but the motivation. We want to understand why a player made a certain move. And that’s why betting patterns are so important. We can build up a picture of a player just by noting how often he calls, raises, or folds. If we take his ticks, his betting patterns, and his table manners, then it’s fair to suggest that you will have a pretty good idea as to why he plays the way he does.

At the end of the day, whether you have a poker face or not, is not the important factor here. It’s much better that you understand and act on the game’s fundamentals as opposed to whether the other layers adjusted his nuts. Now go and check out these great online poker sites.