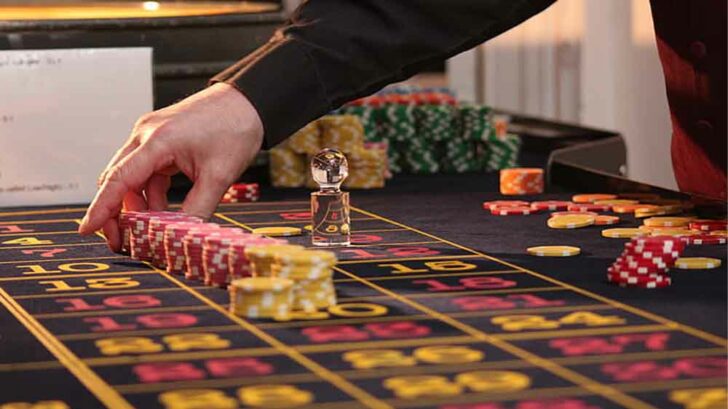 If you have read the articles here about casino games, then there’s one term that keeps coming up: house edge. You’ll note that we say things like “blackjack has the lowest house edge” and that “slot machines have the worse house edge”. We’ll say that craps tables have a house edge of less than 2%, while a different bet at the same craps table will have a house edge of 16%. But what does it all mean? What exactly is the house edge and how does it work and affect your playing abilities? Let’s have a look…

Some Probability Background that Matters

House edge and probability go hand in hand, and you’ll need a basic understanding of the latter in order to understand the latter. Now, the probability is a mathematical means of being able to measure the likelihood of something happening. If you watch the weather forecast, the weatherman will say there’s a 60% chance of snow. He’s using probability to express a possibility. Expressing this as a percentage seems totally natural, as that’s what we’ve been doing since 8th grade at school. Of course, you could express this as a fraction, which in effect is all probability is. Essentially you’re looking at the number of ways a thing could happen and dived this by the number of possible outcomes. For example:

You’re rolling a dice, and want to know the probability of a six being rolled. The dice has 6 sides with only one six appearings. So, there are 6 possible outcomes. And since only on of those outcomes is a 6, then the probability of rolling a 6, must be 1/6. As a percentage, that would be 16.67%. You can also convert this to an “odds” format. This method compares the ways an event CAN’T happen to the number of ways that it can. So the odds of rolling a 6 are 5 to 1.

Now you have an understanding of probability, let’s move on to the house edge.

What Is the House Edge and Why Does It Matter?

Keep in mind, that every bet has a payout if you win and a fixed amount if you lose. What this means is that, if you were playing blackjack for example, then you’d bet one unit, and if you win, then you’ll win that same one unit. If you were to lose, then you’d lose that one unit. So, if you were to bet $100, then you’d either end up winning or losing that $100. This is what’s known as “even money”. You can express the payout using odds. So, an even money payout is called a 1 to 1. You can get a 5 to 1 payout.

This means that when you win you’ll get 5 units, but if you lose, then you give up just 1 unit. Using the example of throwing a dice, you’ll see that in the long run, you’ll win as much as you lose.

In this example, there’s no house edge. But now imagine that I reduce the payout for rolling a 6. We go from 5 to 1 to 4 to 1. So now you can see how casinos maintain their long term mathematical edge by paying out less for any win situation. So, let’s go back to our dice throwing. If you make 6 x statistically perfect rolls of the dice, you’ll win once and lose 5 times. If you were to bet $100 each time, then you’d end up with a single win of $400 and 5 losses of $100 each. So, a total of $500 in losses. After this session then your complete net loss would be $100. Seeing as this net loss is over the six bets, then it works out as 16.67% of each bet.

And that is the house edge. Yes, there is any number of means by which you can arrive at this number, but we think that this method is the easiest to understand.

To put it at its simplest, for every casino game you play, the house pays off your wagers at lower odds than the odds of winning. Thus, the house has a mathematical edge. And that’s why all casinos are able to pull a profit. It’s a long term strategy that, even though some players do end the night as winners, will ensure that the casino always ends the night with a profit. You must always keep in mind that in the short term, anything can happen. But with probability and the house edge, this is a long term phenomenon.
Essentially, when you play at the casino, you’re playing short term. But the casino is playing long term.

If the House Has an Edge, Why Do People Still Play Casino Games?

Of course, if the casino wins in the end, then why do people continue to play casino games? The answer is simple. Players don’t think long term. Obviously, if they did, then all working people would save at least 10% of their income for a rainy day. We all know someone who visits the casino on a regular basis. For sure they’ll lose 4 out of every five visits. He’s not thinking about all those losses. He’s fixed on the buzz he gets from the one win. When it comes to gambling, the mind becomes an irrational organ.

How the House Edge for Various Casino Games Compares

When you enter the casino, it’s not just the house edge you’ll need to worry about. The two other important factors are the rate of play, or rather how many bets you place per hour. And then there’s the factor as to how large/small your bets are. On the whole, we always recommend that you seek out games with the lowest house edge. Then there are the casino’s own game conditions. An example would be blackjack. Now in some games, a natural pays out at 6 to 5 odds instead of 3 to 2. So you can see that the house edge on the latter is much higher. Let’s have a look at common casino games and the effects of a house edge on their play-ability.

This is a great place to start as it’s widely known that this game offers a house edge of between 0.5% and 1%. But keep in mind that this assumes you’re making the optimal move each time. Die to play error, the average blackjack player is probably giving up 2% on mistakes.

In craps, you’ll find that different bets will result in a different house edge. With “basic bets” like pass and come, you’ll find a house edge of around 1.41%, which is pretty low. But if you start playing with more exciting/risky wagers, then expect the house edge to increase substantially.

As you probably already know, there are two main variations of the game. The US version has an extra zero on the wheel, called a “double zero Wheel”. This means a house edge of 5.26%. Whereas the European wheel, with only a single zero, offers a considerably lower house edge of 2.70%. So, remember that when you’re going to play, always look for a single zero wheel. Check out our list of the best casino sites to play online.

The house edge on slot machines can vary hugely. Unfortunately, you’ll never know what that actually is. Each game will have a PAR sheet, which determines the probability of getting various combos and payouts. But this isn’t public knowledge. We do know that slot machines are not a good value, with some house edges as high as 35%. Having said that, there are sites with progressive jackpots that offer enormous prizes.

Though your average video poker machine will look very similar to your average slot machine, the house edge is considerably better. But you must play optimally. Have a look at the paytable on the side of each machine. You’ll find that the house edge for video poker can be as low as 0.5% and as high as 5% – 6%. We’ve made a list of the best video slots to play.

Now you can see more clearly what you’re up against in the casino. Remember that it’s all about long term strategy. Talk to any professional player of casino games and you’ll discover that the short term is of no interest to them. The only way to make consistent profits is to play for the long haul. have a look through our best casino jackpot reviews to find the best games for you to play.