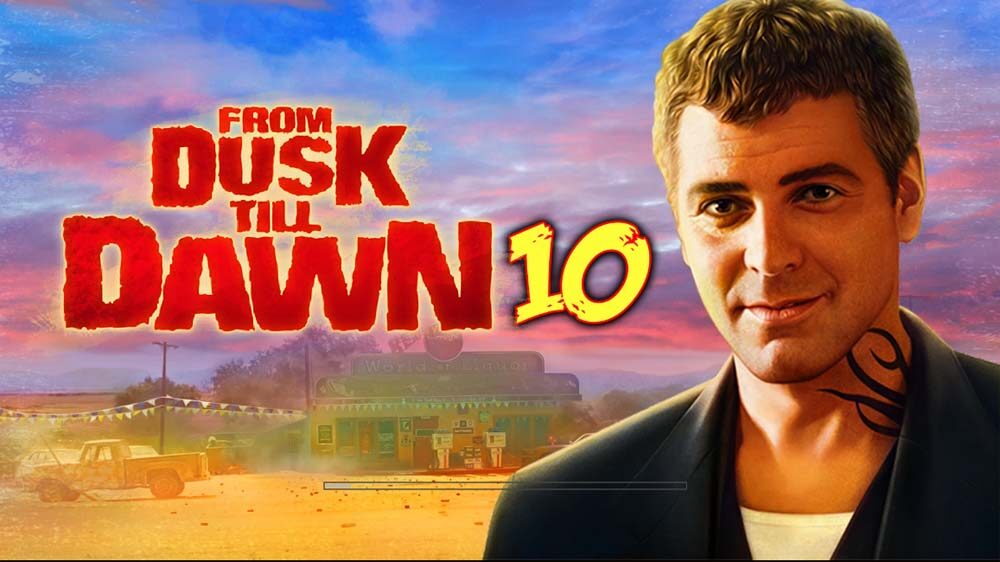 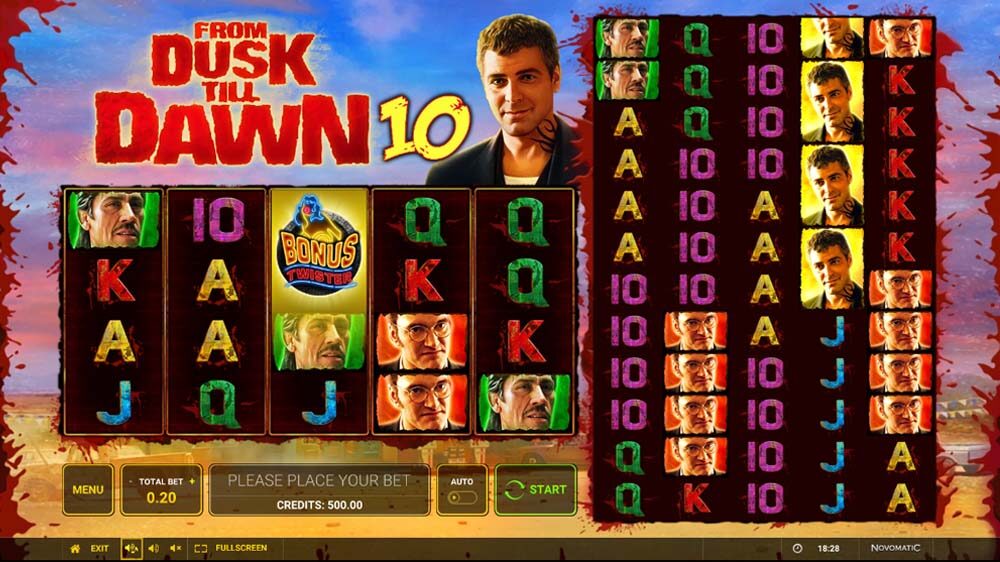 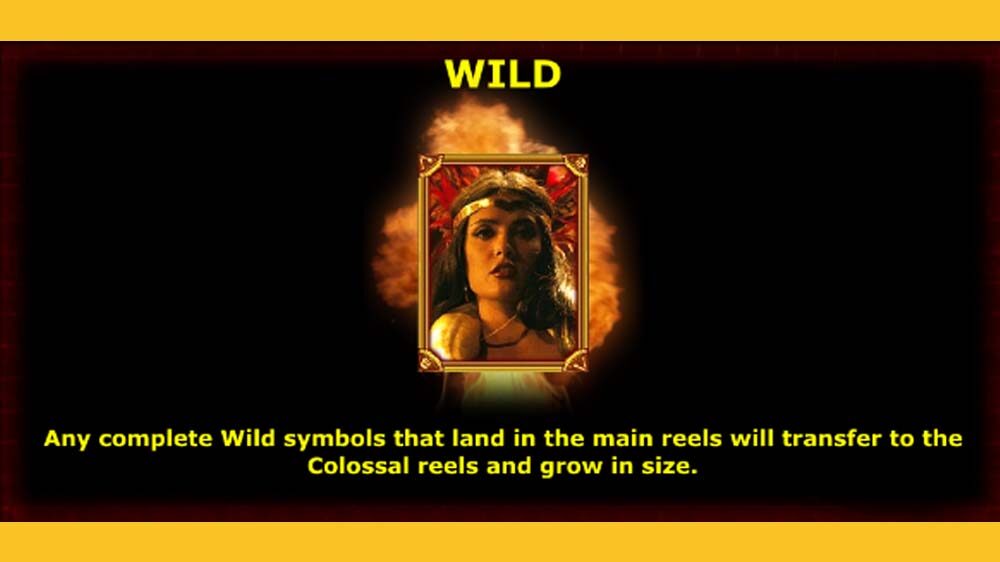 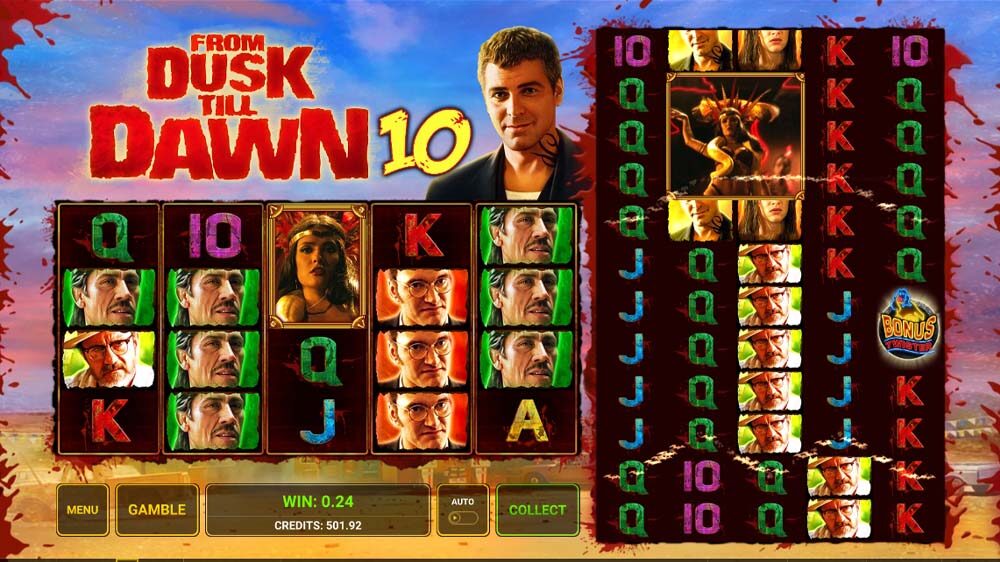 Our very own From Dusk Till Dawn 10 jackpot analysis is the perfect way to get familiar with the latest Green Tube video slot which is fresh on the blocks. The game sees the return of the Gecko brothers with more animations and a far greater chance of winning on practically every single spin! Have a read through our slot review and see if this game tickles your fancy or not.

From Dusk Till Dawn 10 Jackpot Analysis: An Introduction

Onto the general information and other outstanding details of the slot. Well, first of all, From Dusk Till Dawn 10 is what we like to refer to as a branded slot. This basically means that you have not met the characters of the title beforehand. More notably, the slot is based off of the 1996 horror movie starring George Clooney and Quentin Tarantino as two brothers who go on to become bank-robbers.

The game is a brilliant adaptation of the movie and truly brings the classic film to life. However, this game is not like your typical slot. No, instead, you’re going to be up against 2 sets of reels which will combine to give you a total of 100 paylines. Thus, there’s plenty of chances for you to actually bag a small fortune.

From Dusk Till Dawn 10 also provides players with many special features and bonus rounds. But more on that later. For now, all which is really important to know is that the game offers a maximum payout value of 500x your stake and you can place anything from €/£0.20 to €/£100 per spin. Moreover, with a high RTP value of 95.05%, you can expect that big win to be just around the corner. From Dusk Till Dawn 10 also has a low-mid variance rating, meaning, you can expect to claim a win on every other spin.

Now that all the basics are out of the way, we’d like to get into the specifics. And where better to start than the layout? If you’re unfamiliar with the movie the slot is branded off of, just think of a Western sort of flick with sheriff hats, pretty ladies and an all or nothing sort of vibe. After all, given the unique design of the game, you may want to play this slot, even without knowing the movie itself.

From Dusk Till Dawn 10 has got two main sets of reels on its page. The first one, which is found on the left side of your screen, has got 5×4 grid and offers 25 paylines. It is horizontal so can be considered as a standard grid for all slot-loving players.

The other reel on the screen will be slightly different and is the complicated one. It has 75 paylines on offer which can be claimed from the 5-reels, 12 rows slot machine. Funnily enough, this set of reels stands up vertically. The two reels together add up to 100 paylines.

When spinning on these two reels, you’ll notice that they’re quite independent from each other. Moreover, you’ll want to land matching symbols on reels 3, 4 or 5 or wilds on the payline from left to right. If you do go for the latter, you can start from reel 1.

When you do start playing, you can also select a Reality Check Interval. This is an amount of time which ranges from 1 to 120 minutes and is basically the Autoplay feature of the slot. You can go up to 100 autospins. However, when this comes, you can also set a limit for the machine to know exactly when you want to stop playing. Alternatively, you can also select a win amount which will tell your device to stop spinning if you happen to reach that amount – or even exceed it if you’re lucky.

In order to win, you’ll have to be fully aware of what you’re up against. Well, the lowest paying symbols of From Dusk Till Dawn 10 are notably the 9-A royals. From here on out, you’re in for symbols which have more about them and can actually bring you some quite decent prizes. As you’ve probably imagined, a large portion of these icons are characters from the movie.

You’ve got your Juliette Lewis, Seth Gecko, Gorgeous George, Quentin Tarantino and Santanico Pandemonium all making appearances. Gorgeous George is the highest paying symbol in the game and will get you a payout of either 0.5, 1 or 5x your stake, depending on where you land him. The wild of the game is represented by Salma Hayek acting Santanico Pandemonium. She can land on both sets of reels and truly gives you a better chance of winning, especially as she has the right to play on every single reel in the game.

Looking for a good bonus? - Take a look at Casumo Casino

Our recommendation is that you’d probably have a better time playing this video slot if you were trying it out on a desktop. It is available for all devices, including iOS, Mac, PC, Android and Tablets too, but due to the right-sided vertical set of reels, it’s probably easier to use a computer screen. By doing so, you’ll have the complete layout in front of you and the general gameplay will be easier to follow and read. But the smartphone version of this slot also works just fine.

Now then, onto the special features of the branded slot themselves. The gameplay of this video slot is quite intriguing to say the least. You’ve got a total of 10 reels all spinning at once to give you a chance of winning. Hence, the name, From Dusk Till Dawn 10. Within this title, you can come across the likes of expanding wilds which are transferable between the two sets of machines. Moreover, there’s also a free spins round and a bonus respin feature.

First and foremost, we analyze the Transferring Wilds feature and check out what the expanding bonus will get you. If you are fortunate enough to land a full stack of wilds on the standard machine, watch and be amazed as those wilds duplicate and fill up the whole of the same reel on the second grid.

The Transferring Wilds feature will allow you to see a set of wilds expand to turn a whole reel wild. Moreover, this will happen on both sets of reels, not just on one side. Let us draw you a picture. Say, you’ve landed a stacked wild on reel 2 on the right sided set. The whole 2nd reel, on both slot machine grids, will than turn wild. Ultimately, this leads to a whole lot more wins and can give you a tasty little pay rise.

The second feature which is worth checking out is none other than the Lock & Spin feature. In a nutshell, this is a respin bonus which can trigger at any given time during the base game. When this happens, 1 symbol is picked to be the winning symbol.

From here on out, whenever that symbol lands on the reels, it will lock in position and an immediate respin will take place. This occurrence keeps on happening until you have a respin which doesn’t lead to any new winning symbol hits.

But that’s not all folks! Fortunately, you can also land on the Sheriff’s Badge. This is considerd as the Level Up symbol. What you’re going to want to do is to collect these to upgrade the value of the winning symbol and boost your potential payout. Lastly, you’ll want to collect enough of these bad boys to unlock Seth. When you do so, every time the Lock & Spin feature triggers, the symbol selected will be Seth. This is a good thing as it is the most rewarding symbol of its kind for this bonus perk.

Following the respin feature, you’ll be pleased to hear another fine addition to this slot to give it a small little boost. From Dusk Till Dawn 10 does a neat job of providing players the opportunity to win a little bit more from a completely separate wheel of fortune. Here’s what you want to do.

In this video slot, there are a number of Bonus symbols which can appear on reels 1, 3 and 5 on both sets of reels. If you’re fortunate enough to land at least three of these, you’ll trigger the Bonus Wheel feature. However, the more you trigger in a single spin, the more spins you’ll be awarded on the wheel. Here’s how the numbers work:

Ultimately, the Bonus Wheel is a holy grail to receiving free spins and big cash prizes. Sure, you may also just pass by all the top prizes and end up with a low return, but the risk is certainly worth it!

When playing the Bonus Wheel, you can receive cash prizes or free spins. Obviously, if you do receive free spins, you’re only going to be allowed to play with them after you complete all your spins on the Bonus Wheel feature.

As mentioned before, you can trigger the free spins round via the Bonus Wheel, in which you’ll need to land 3 or more Bonus symbols. However, the free spins feature has a slight boost to it. Whenever you land a wild on the reels during the free spins round, you’ll see the symbol transfer across from the standard reel to the other sided reels and fill the equivalent reel.

From Dusk Till Dawn 10 Jackpot Analysis

Unfortunately, there is no jackpot available for this branded slot. Sadly, From Dusk Till Dawn 10 is not one of those jackpot slots we all know and love. However, it’s not the end of the world, as there is still quite a hefty maximum win amount up for grabs.

If you’re fortunate enough to fill up the reels with the Gorgeous George symbol, which is the highest paying symbol in the game, you’ll be lucky enough to be looking at 500x your stake. Indeed, on a maximum bet of €/£100, that’s a massive €/£50,000!

Thus, to conclude this From Dusk Till Dawn 10 jackpot analysis, we’ve got to give it up for Green Tube. The online software supplier group have yet again outdone themselves with an outstanding branded video slot.

From Dusk Till Dawn 10 is one of a kind and comes with pretty awesome special features including several bonus boosters as well. This video slot is 100% recommended if you want to try out a top-notch game which including many bonuses. The graphics are not absolutely amazing, but they do get the job done, especially with a slot as unique as this one. After all, you’re not going to be playing a game with two sets of reels every day, now are you?

Aside from the many pluses which can be listed for this slot, the negatives also do pile up as well. If you’re not going to make the effort to try and understand how the two sets of reels complement each other, you’re not going to have the best of times. Moreover, the slots maximum win amount is rather low, when compared with other slots.

Thus, if you want to play a game purely for a fun time and to make some small wins and earn some cash, From Dusk Till Dawn 10 is the game for you. However, if you’re on the prowl for a life changing win, you may want to look elsewhere. We’ve got a fine selection of games on our latest jackpot ratings which ought to do the trick for you. Head on over there now to see these slots for yourself and pick the game with the biggest prize that takes your fancy.

From Dusk Till Dawn 10

From Dusk Till Dawn 10