Sausage Party Jackpot Analysis Within this Sausage Party jackpot analysis, we take a look at all the special features and bonuses which are available in this branded slot. 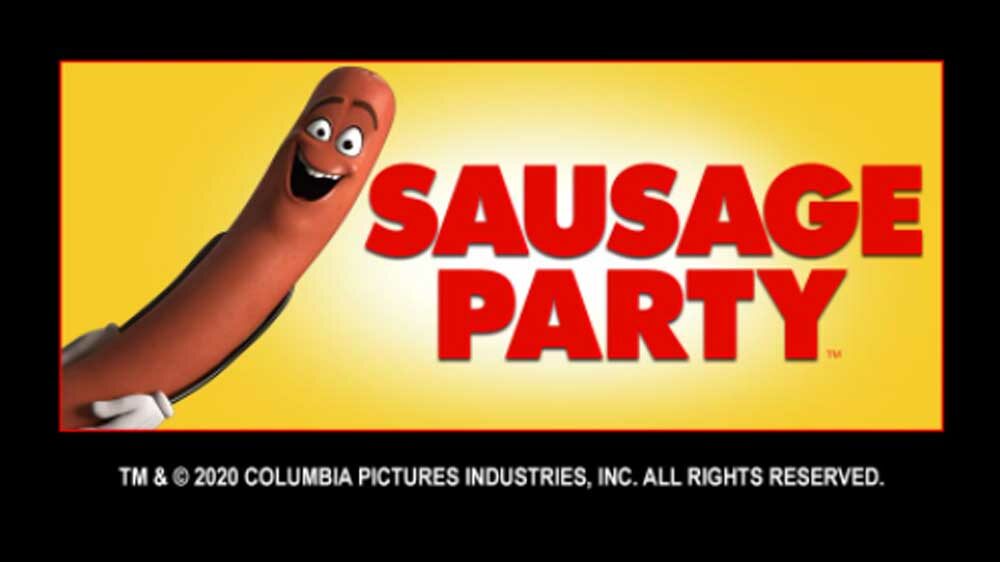 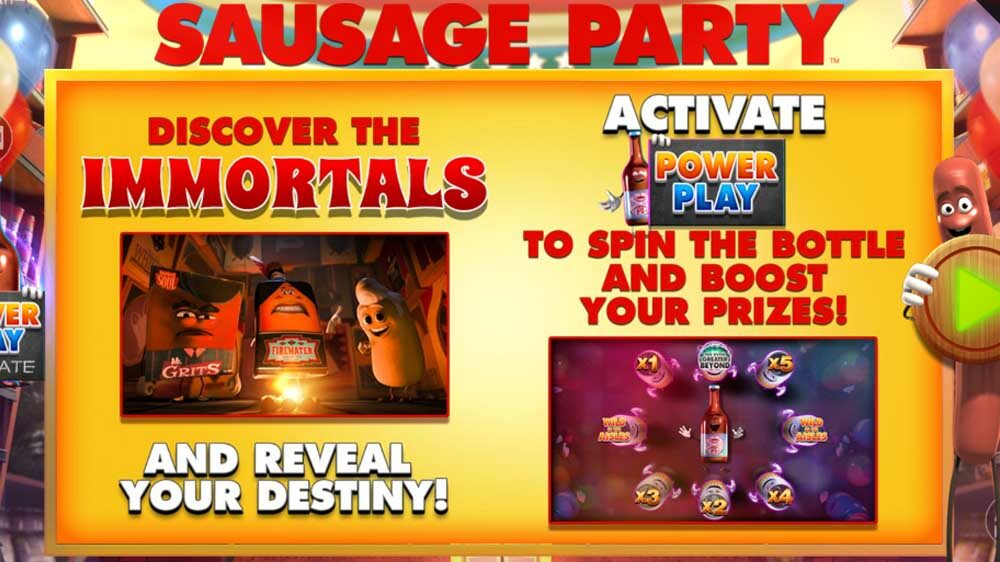 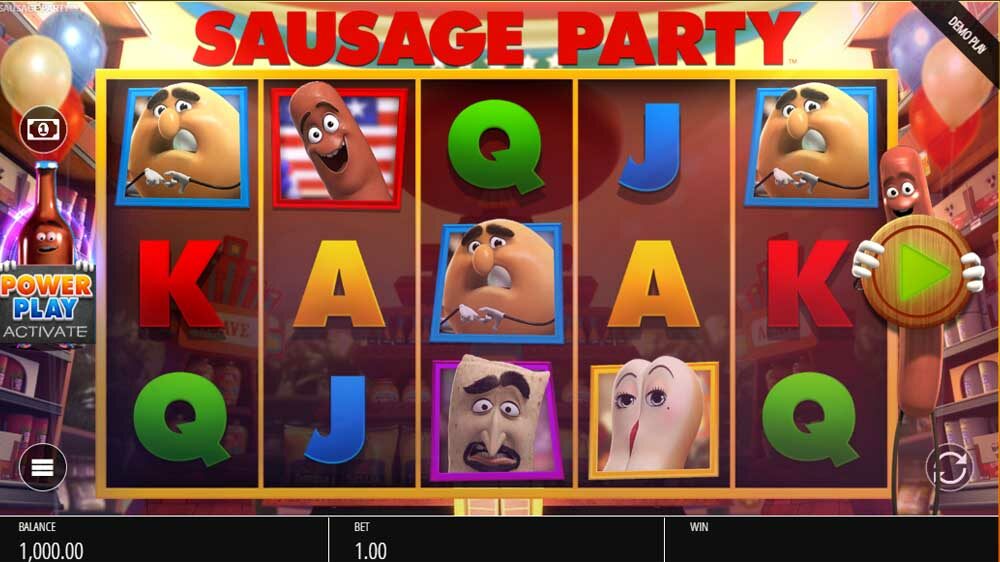 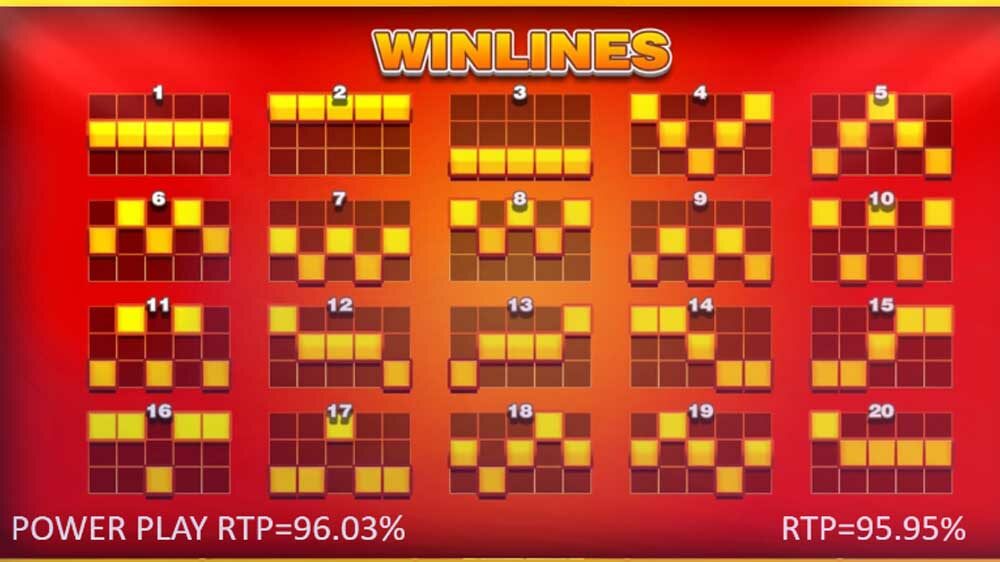 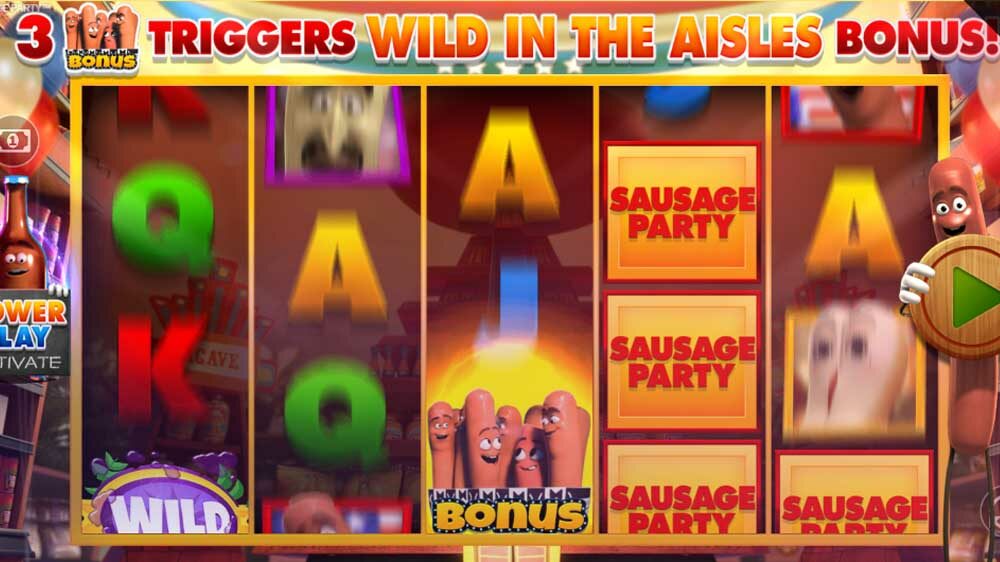 If you liked the Sausage Party movie, you’re going to absolutely go bonkers for the video slot. The video slot consists of 5 reels and 20 paylines and is an absolute gem of a game by Blueprint Gaming. Within this Sausage Party jackpot analysis, we break down what this title is all about. That includes a total of 13 bonus features and a high RTP of 96%. Let’s get into it.

The branded video slot was created by Blueprint Gaming after the 2016 movie was a box-office success. Mind you, the 83% rating which was given by Rotten Tomatoes suggests it wasn’t for all to enjoy.

The adult cartoon movie basically is about a sausage called Frank who lives in the supermarket. However, food discover the truth about their existence (to be bought by customers and eaten) and decide to try and escape their unfortunate ending. In a nutshell, that’s pretty much a nice way of summarizing the movie.

For all takers who’d like to have a go on this branded slot, you will be up against 5 reels, 3 rows and 20 paylines. In order to claim a win, you’ll need to land at least 3 symbols which all match. Mind you, the Sausage Party logo and Wild symbol will only require 2 for a win to be recorded.

The Sausage Party video slot requires you to place a bet ranging from €/£0.10 to €/£250 per spin. This makes it an ideal slot for both low and high rollers. There is also a Power Play Bet feature, which allows you to double your stake from €/£20 to €/£500 per round. What’s more, Sausage Party allows you to play without having to manually select the spin but with an autoplay function. The Autoplay gives you up to 100 autospins and allows you to select a win and a loss limit. That way, your device will know when to stop if you reach a certain amount of credit in your account.

In terms of volatility, Sausage Party is balanced out at having a mid-level variance to it. That means that wins happen often enough and are quite decent. The high RTP of 96% is especially effective if you activate the Power Play Bet and double up your stake and winnings. The maximum win for this slot is 500x your stake. However, due to a special bonus feature option and multiplier booster, that could potentially go up to 1,000x. Although the maximum win is considerably higher in other video slots, the sheer amount of bonus features and ways to make a profit in this game indicates that you’ll never be bored of playing.

Sausage Party is not the first branded game to be made by Blueprint Gaming. If you take a look at our many jackpot slots, you’ll find other titles like the Rick and Morty slot and Ted game also to be by the creators of Blueprint. One thing which is common for all games, including Sausage Party, is that the graphics, animations and bonus features are all made with the upmost care and enjoyment.

When a game has an abundance of special features and attention to detail, you can be sure that it is a product which the creator group could be proud of. After reading this Sausage Party jackpot analysis, you may want to play the slot for yourself. Much like in the movie itself, the game is set where it all begins, in the supermarket.

In terms of the symbols you can find in the Blueprint Gaming slot, the standard royals from J to A are all available on the reels. In the tier above, you can find many food characters such as Frank. Funnily enough, Frank pays 15x your stake for landing 5 in a winning combo.

The highest paying symbol of them all is the Sausage Party logo symbol. Whenever you land 5 in a combination, you will receive a 25x payout. But that’s not all, you just need to land two of them to make a win. The wild of the slot is depicted from the Purple symbol which substitutes all standard symbols except for the scatter and pays up to 25x your stake.

If you’re intrigued about playing Sausage Party, you can do so on desktop, mobile, and tablets too. In fact, the Blueprint Gaming HTML5 systematic technology works perfectly on Mac, PC, iOS and Android without any issues. You can even play Sausage Party on the smallest of screens and have a smoothly running gameplay experience.

Within Sausage Party, there are as many as 13 bonus features in the title. One of which, is the awesome Power Play Bet feature. There are 6 random base game features and 6 main bonus features. Let’s get into them below.

As seen in this Sausage Party jackpot analysis, the video slot has got six Immortals features which are triggered randomly from any base game spin. Let’s take a look at just what those are.

Wild in the Aisles Bonuses

Unfortunately, despite all the amazing bonus features and perks about playing, Sausage Party does not have a jackpot. The video slot allows you to play for a massive 1,000x your stake if you are fortunate enough with the Fr-enda wild 2x multiplier. That would mean you could claim €/£250,000 in a single spin!

Thus, to conclude this Sausage Party jackpot analysis, we’ve got to give it up for Blueprint Gaming. Yet again, they’ve proved their worth in gold with a fantastic video slot with exceptional visuals, animations and a bunch of features as well.

If you’re not convinced by Sausage Party, perhaps for the simple lack of a mega-prize, that’s okay too. The video slot is far more enjoyable for players who just want to have a good gaming experience. If you’re looking to make big bucks, you may want to take a look through our latest jackpot ratings for additional games with bigger prizes.