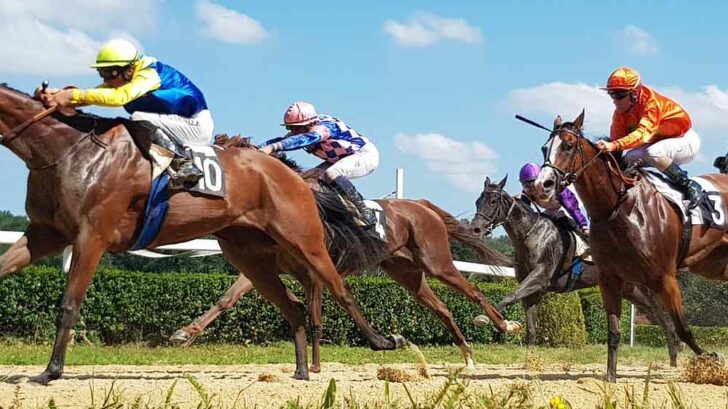 It is very strange that there’s no Las Vegas horse racing industry. Maybe it’s because sports betting in the US is only allowed in very few states. So for many none resident sports enthusiasts, Nevada represents the only athletic competitions on which they can wager legally. But no horse racing. In fact, there’s not a single horse racing track in the whole state. Though it’s often referred to as “The King of Sports,”  it’s been enjoyed in the US by fans since the mid-1600s. The domestic horse racing industry can trace its roots back to the Newmarket Course in Salisbury, New York, in 1665.

Bet on horse races at the Bovada Sportsbook

So, seeing that the sport has an illustrious past and is still today incredibly popular around the world, then why would Las Vegas, the gambling capital of the world, not indulge in racing the horses? In fact, the state of Nevada doesn’t offer a single horse race. You’d imagine that Sin City and horse racing would be the perfect fit, as a hand to glove. And considering that the first legal part of the US gambling industry was set up with lots of jackpot games in 1931, you’d imagine the sport to be a shoo-in. But so far, Las Vegas has struggled to get the sport off the ground there.

But it was not for want of trying. There has been any number of efforts over the years to bring the noble sport to Nevada’s racing bettors. And yet each time, they have failed. For the sake of a good yarn, let’s have a deeper look into some of these stories.

Joseph M. Smoot was a New York City promoter back in the 1940s. In 1946, he wanted something more and so, left the city and moved to Las Vegas. With his business partner Hank Greenspun in tow, he wanted to set up the first horse racing track. Greenspun didn’t share his friend’s enthusiasm for the horses, preferring the profession of being a journalist, and the two men went their separate ways. Smoot already had plenty of horse racing industry experience, as he’d previously worked on helping set up the Hialeah and Gulfstream parks in Florida, along with the famous Santa Anna Park in California.

Smoot set to work to develop the new track. Having raised millions of dollars from local investors, he set about forming the 1-mile-track. The project had a working title of “Las Vegas Park”. But all was not what it seemed. As Greenspun would recall much later in his memoirs, the scheme to make a horse racing track was just a smokescreen. Smoot was just creating a scheme to embezzle investors. As Greenspun wrote, “Old Joe knew a track wouldn’t have a chance, and he said so when he came here in 1946.”

No Las Vegas Horse Racing: Smoot Was A Schemer With A Scheme

And so it proved. When the track opened, on September 4th, 1953, the embezzlement scheme became apparent. In 2008, the Las Vega Sun published a retrospective piece on the race track. It was titled, “A Sad Saga: Horse Racing in Las Vegas”. Here are some choice quotes.

“Before the first race, the Australian-made tote board on the infield went down. And machines inside the $50 and $500 betting windows broke, so high rollers were forced to make many small wagers at the commoners’ windows”.

“Lines were long. Tempers were short. A disappointing and shallow-pocketed crowd of 8,200 saw Lefty James, with star jockey Tony DeSpirito on top, win the $10,000 Mirage Handicap”.

“After three days of poor attendance and the continued malfunctioning of the tote board, racing was suspended for two weeks so an American model could be installed”.

Finally, the whole debacle was closed down for good on October 19th, which was just a mere six weeks after its opening.

Fast forwards to 1963. This time the Thunderbird Hotel investor Joe Wells put his money down in order to build a half-mile-track next to the hotel. This would be the Thunderbird Downs Track. Except that it, just like its predecessor, wasn’t to last. Though the track did host horse races for three years, the attendance was pitiful and it ended up closing down. There just weren’t enough punters for the business, and it passed through numerous hands before it’s final yet predictable demise. There just were no funds to keep its business head above water.

The Funk family was another business group determined to create a horse racing scene in Las Vegas. They had a lot of hands-on experience as race track operators from tracks from venues in Florida all the way across to Oregon. The father, David Sr was joined by his two sons, David J. and Albert, in order to get the new racetrack open on January 15th, 1981. Called the “Las Vegas Downs”, it was situated on the corner of Boulder Highway and Racetrack Road. Opening night was a scorcher, with twelve racecards and a daily double for the night’s last two races. But it was all downhill from there. The average nightly attendance never breached north of 1,000 patrons. To rub salt into the wound, the City of Henderson began a foreclosure, as it demanded back payments of over $364,000.

In 2015, after the death of David Jr, his elder brother Albert wrote an obituary. In this, he stated that the whole family had been saddened by its inability to make a go of horse racing in the city of Las Vegas. He said that profitability was impossible in the long term. In short, there was no way to increase your jackpot winning chances by getting the business to function. Yet the family found it difficult to walk away from their investment of both time and considerable sums of cash. Things became so dire that the Racing Commission member George Franklin offered to help out the family via other avenues of funding. Nothing ever came of it, in part because of the Funk family’s reluctance to throw good money after bad.

And that, ladies and gentlemen, was the last effort in the attempts to set up and operate a horse racing track in Las Vegas.

You’d think that opening a horse racing track in Las Vegas would be a sure-fire win. After all, the city is bursting with gamblers. And it already has most of the facilities needed to support such a venture. But as we can see from history, Las Vegas really doesn’t appear to want the sport there. The real problem was the assumption that gamblers equal sports bettors. They are a completely different breed, and it’s this basic confusion that saw these previous ventures fail. Gamblers go to Vegas to play in the casinos to win the jackpot. Not for any sportsbook action. Like betting on the horses. If you’re in the area, then there are tracks for horse racing at South Point, Wynn, or the Westgate Superbook.

Having said that, we’re sure given enough time, some other optimistic investor will pony up the cash for yet another bash at getting horse racing to the gamblers in Sin City.