Agent of Hearts Jackpot Analysis Our very own Agent of Hearts review is here to break down the Play'n Go slot to a tee. From small details like the features involved to the general outlook and view of the game. We look at it all. The online video slot consists of a Free Spins game mode which is the most profitable way of making a killing in this slot. You're going to want to stay in the Free Spins round for as long as possible. For some symbols, you only need to match up two symbols to record a win. Tune in for more info. 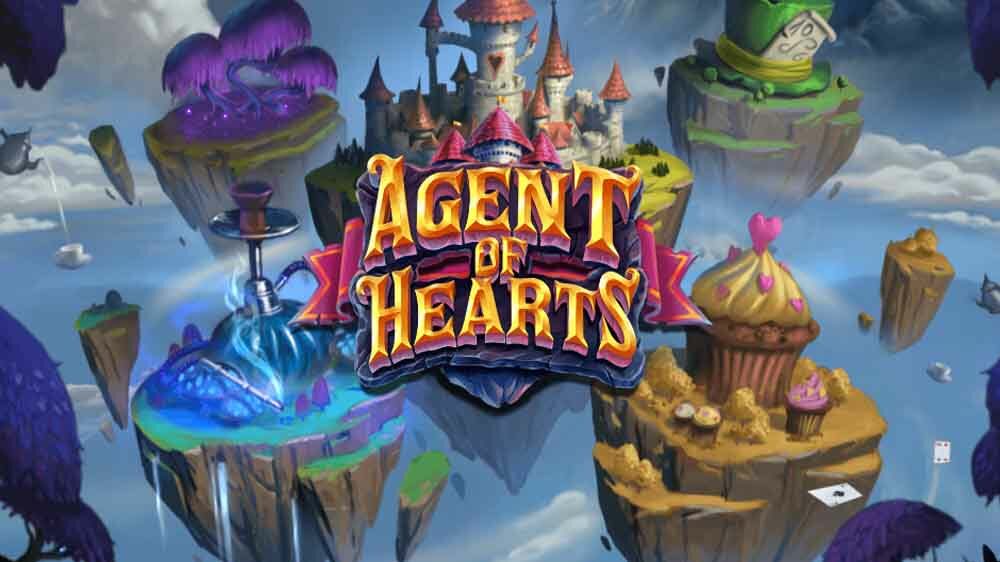 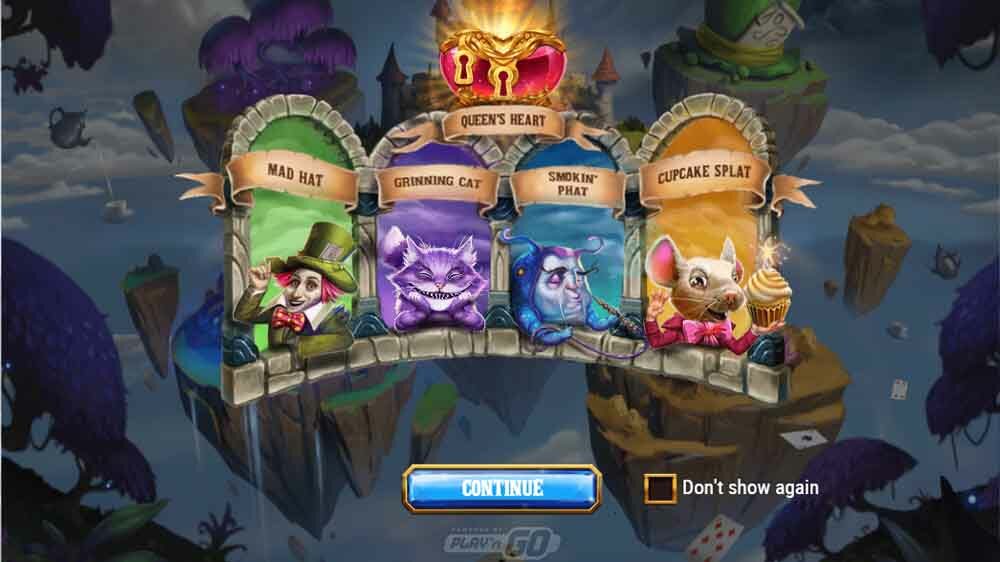 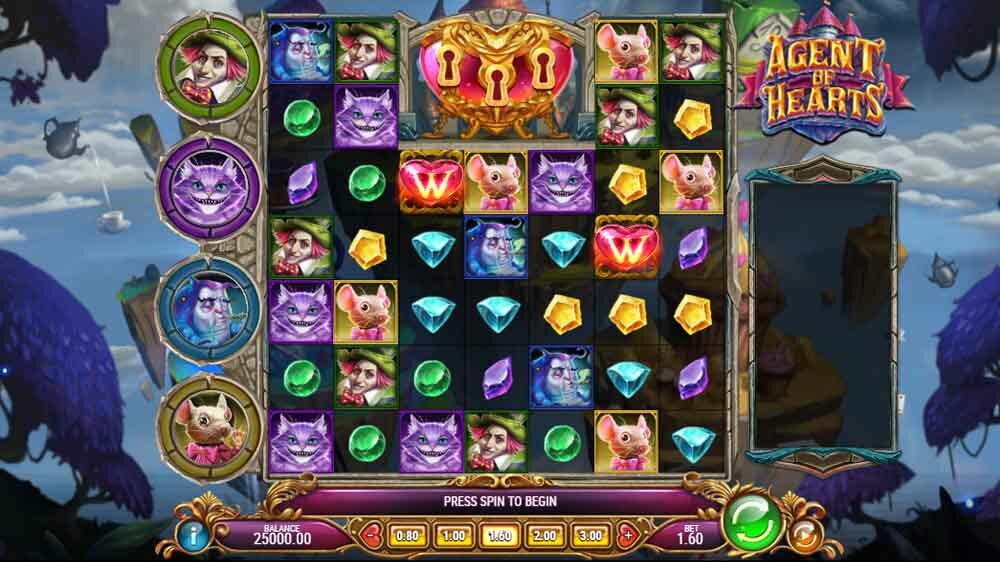 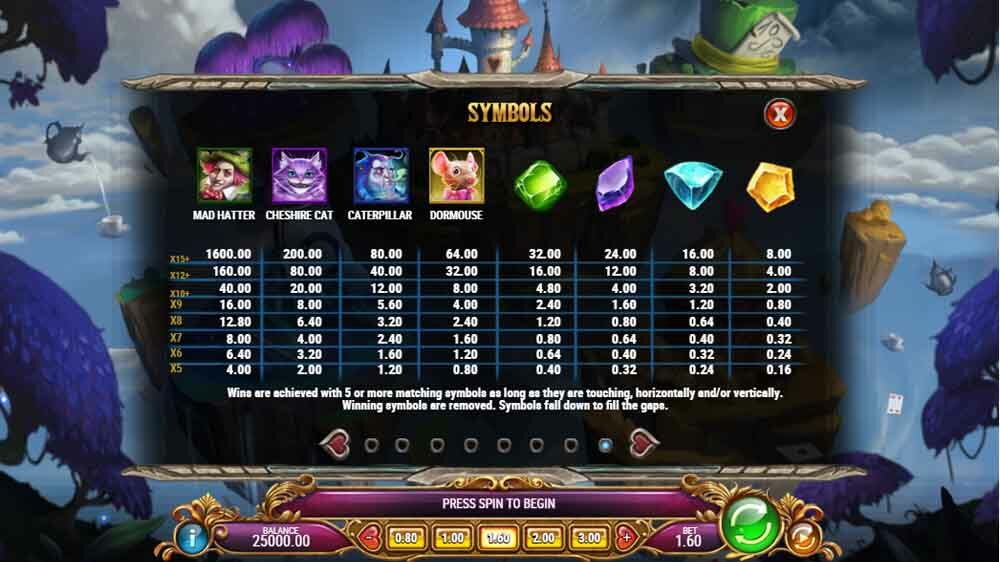 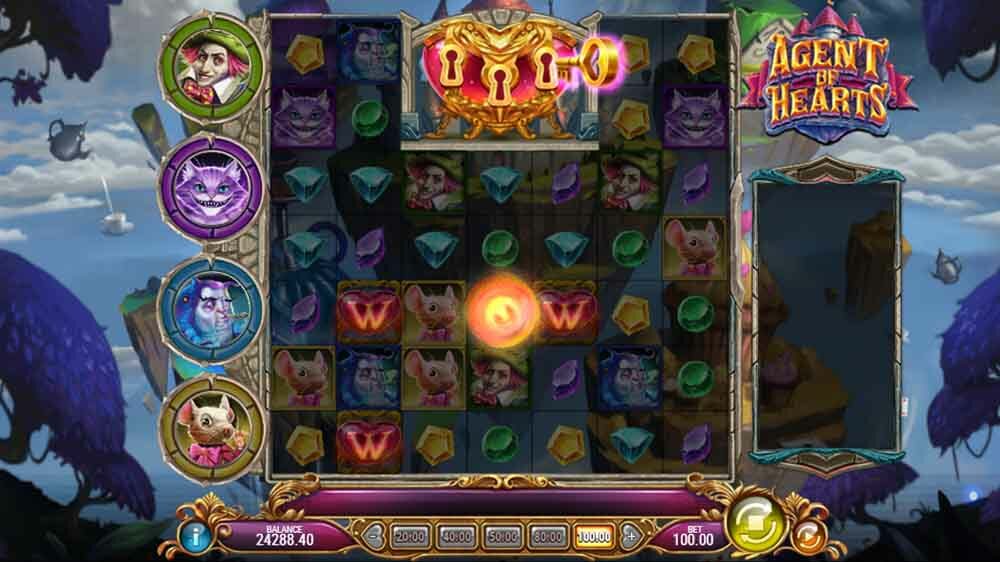 Agent of Hearts is already a classic Cluster pays video slot by Play’n Go which consists of 7×7 grid. The slot is based on the story of Lewis Carroll’s surreal novel, Alice in Wonderland, which has been adapted to an interactive paying machine. Within this Agent of Hearts jackpot analysis, we break down all the need to know details about the video slot. Tune in to find out more.

When launching Agent of Hearts, the first thing you’ll notice is that the slot is played on a 7 reel grid which goes as the following: 7x7x5x5x5x7x7. In order to form a winning combination, you’ll be required to land a cluster of at least 5 matching symbols.

Whilst the slot takes on a unique game layout, the gambling experience you’re up for is second to none. There are 4 Agent features to make the gameplay quite exhilarating, whilst also offering a Queen’s Heart Free Spins bonus round as well. You’ll also want to keep an eye out for random wilds which can appear in the base game after a winless spin. But more on that later. 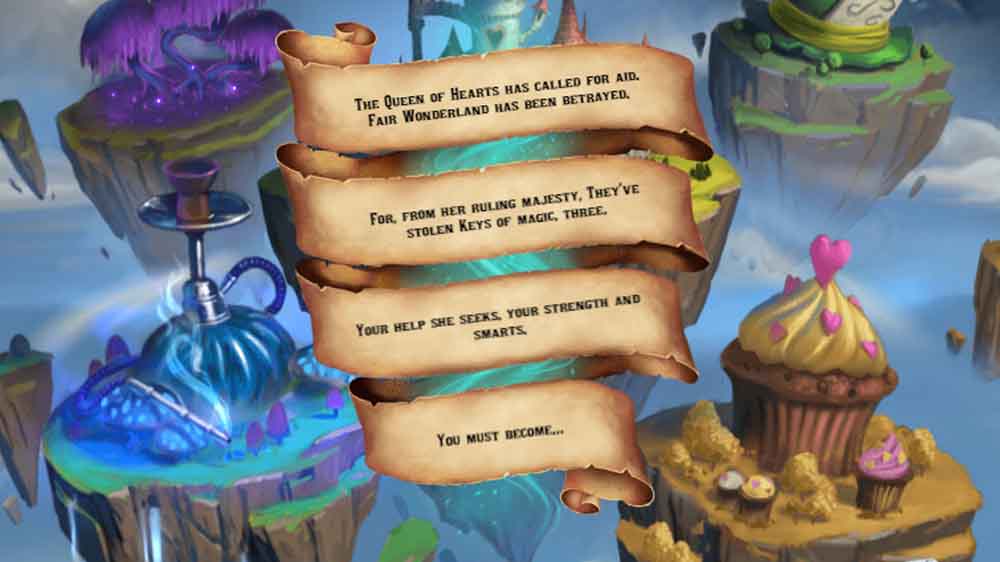 The slot itself consists of betting stakes which range from 0.20 to a maximum stake of 100. Whilst the maximum is quite ordinary, sadly, many low rollers may be put off by the 0.20 minimum stake. By heading over to our list of jackpot slots, you’ll find many games which only require 0.10 per spin.

You are able to adjust your stake using + and – button which are found below the reels. Moreover, there is also an Autoplay function and Turbo Mode. This allows you to watch as the spins happen automatically and at a faster pace as well.

According to our Agent of Hearts jackpot analysis, the Play’n Go video slot is said to have an RTP of 96.25%. That return is fairly average whilst the variance here is not too high. However, the volatility is said to have a rating of 8 out of 10, meaning some wins can come with a massive pay out. The maximum win amount for this slot is 5,262.5x your total stake.

Agent of Hearts is the 3rd video slot by Play’n Go which takes on the Alice in Wonderland theme. Based on Lewis Carroll’s classic story, Agent of Hearts follows the likes of Rabbit Hole Riches and Court of Hearts to complete this trilogy of slots. In this version, the Queen of Hearts has kept her heart safe and secure under lock and protection. This ensures the wealth of Wonderland is kept safe with her.

Unfortunately, however, someone has stolen the heart and it’s your job to find it and win is back. You’re accompanied by 4 characters, the Dormouse, Caterpillar, Cheshire Cat and Mad Hatter, to try to bring back what the Queen of Hearts desires. The imagery for this slot is extremely suitable to the original story but is also easy on the eye.

First and foremost, Agent of Hearts symbols can be divided into two separate tiers. There are the lower paying symbols which consist of 4 different gemstones. Then, in the higher tier, you have got the Dormouse, Caterpillar, Cheshire Cat and Mad Hatter. The most rewarding symbol is the Mad Hatter who pays out 2.5x your stake for landing a cluster of 5. If you manage to get 15 symbols in a cluster, you’ll be looking at a massive pay out worth 1,000x your total stake.

If you’re curious to try out Agent of Hearts for yourself, simply head on over to one of our many Play’n Go casino sites. You can find the full list at the top of this slot review. The visuals and presentation for this slot are second to none, with crystal clear clarity as well. As for the gameplay, it is simple, which makes Agent of Hearts very simple to grasp. The slot uses the modern HTML5 technology.

You will be able to play this slot on any mobile device or smart machine. That includes the likes of iOS, Android, Mac, PC and Tablets too. Playing Agent of Hearts on even the smallest of screens will not be a problem either.

Within Agent of Hearts, there are a total of 7 different bonus features to make the most out of. Within that bracket, there’s the likes of the Cluster Wins, Random Heart Wilds, Agent features – which contains 4 different types and the Queen’s Heart Free Spins. Next up, we take a look at them individually.

To start off with, the Cluster Wins are an occurrence which happen every single time you create a winning cluster. The symbols are exploding off of your screen, making way for new reels to fall into their empty positions. Many of you may be familiar with the smartphone game, Candy Crush. Well, Agent of Hearts follows the same logic with the Cluster Wins feature.

If, by luck, the new symbols in their respective positions for a winning cluster, a resulting payout is made and those symbols will also disappear from your screen. This keeps on happening until there is no winning combination on the reels.

The Random Heart Wilds is another feature which triggers at any random time during the base game. When this happens, between 4 and 7 wilds are added to random positions on the reels. Following this, if there is a winning cluster, a resulting payout is made and the Cluster Wins cascade becomes active.

There are 4 meters sitting next to the screen. In the mobile version, they’re above the reels whilst on the desktop version they’re next to them. Each meter is based on one of the characters. Whenever you land a winning cluster which uses one of the four characters, the symbols are collected in the associated meter. If you manage to fill all 6 positions on the meter, you’ll activate the symbols feature. Let’s take a look at what that could be.

The first feature is the Cupcake Splat which is triggered by Dormouse symbols. Here, the Domouse runs across the reels from top to bottom. When he leaves your screen, he leaves a trail of cupcake bombs at random positions on the reels. They will explode, removing the symbol and leaving space for new ones to drop or transform into a new symbol.

The second feature is the Smokin’ Phat, which is all about the Caterpillar. He blows 1, 2 or 3 trails of smoke diagonally across the game grid. When the smoke clears, symbols will have been removed or transformed into a new symbol. The first two are very similar but have different animations.

Next up, the Chesire Cat has his very own feature which sees him grinning at the reels. The result of this will see either symbols being removed from beneath or transforming into a random symbol.

Last but not least, the Mad Hat feature is the most productive of the lot. When active, between 6 and 9 Mad Hatter hats are added to the reels. The hats will then spin in their position but knock off adjacent positions to make way for new symbols to drop or transform into new symbols.

At any given time, the White Rabbit can also appear. He will instantly give you 1 Agent feature. If you land more than 1 Agent feature on the same spin, the modifiers play out in the order shown above. Each symbol meter rests on each new spin.

In order to trigger the Queen’s Heart Free Spins, you’ll need to collect 3 keys. This can happen during a single spin or a set of cascades. You’ll then receive a single free spin. During the free spin, the 4 Agent features play out one by one.

After all the cascades have been completed, a 3×2 Mega Wild is then added to the reels. It is used to give you a better chance of triggering more cascades and winning clusters. Remember, after every win, the Cluster Wins feature is active and a resulting cascade follows.

Unfortunately, there is no lucky jackpot prize in Agent of Hearts. For all the many appealing things about the Play’n Go video slot, the lack of a jackpot is certainly a con. For many players, this may be off-putting, in which case, you’re better off heading over to our latest jackpot ratings for alternatives.

However, if you can see past that, Agent of Hearts is a fantastic video slot with a relatively high maximum win amount. If you play with a maximum bet of 100, you could end up winning the maximum of 526,250! That’s a staggering amount to say the least.

Thus, to conclude this Agent of Hearts jackpot analysis, we’ve got to give it up for Play’n Go. The online software supplier group have proved their worth in gold with another Norse slot that’s instantly become a classic.
Whilst the gameplay is rather basic, this makes up for a straightforward gamer experience and enjoyable time. It is highly recommended for newcomers to try out Agent of Hearts because of the simplicity which the video slot offers.

If one were to try it out for the first time, the best recommendation we can give you is to spin a few times without any cash put down at first. That way, you’ll be able to get a feel for the title and realize if it’s what you want to play or not. The alternative is just a click away to check out other jackpot games which may be more attractive for you.