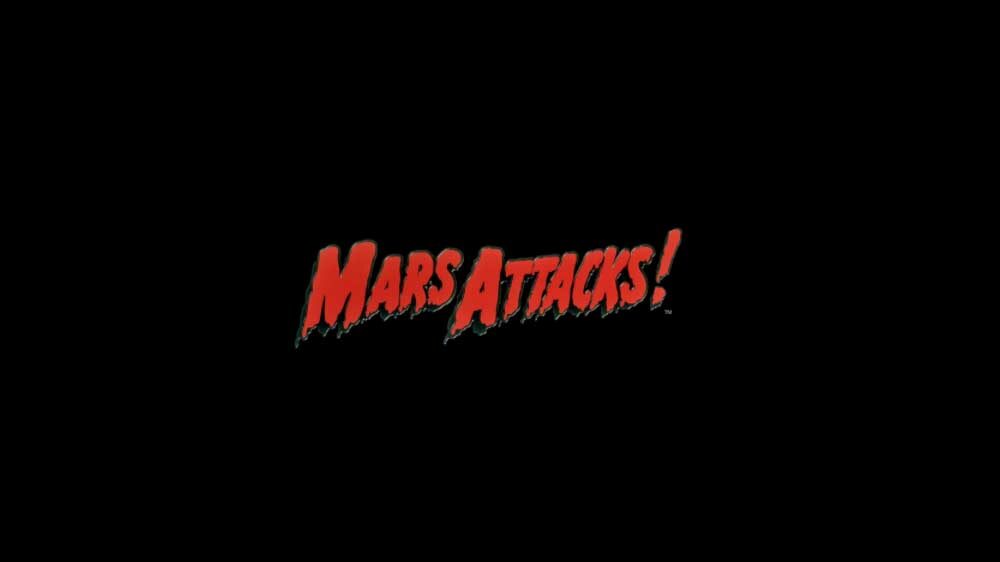 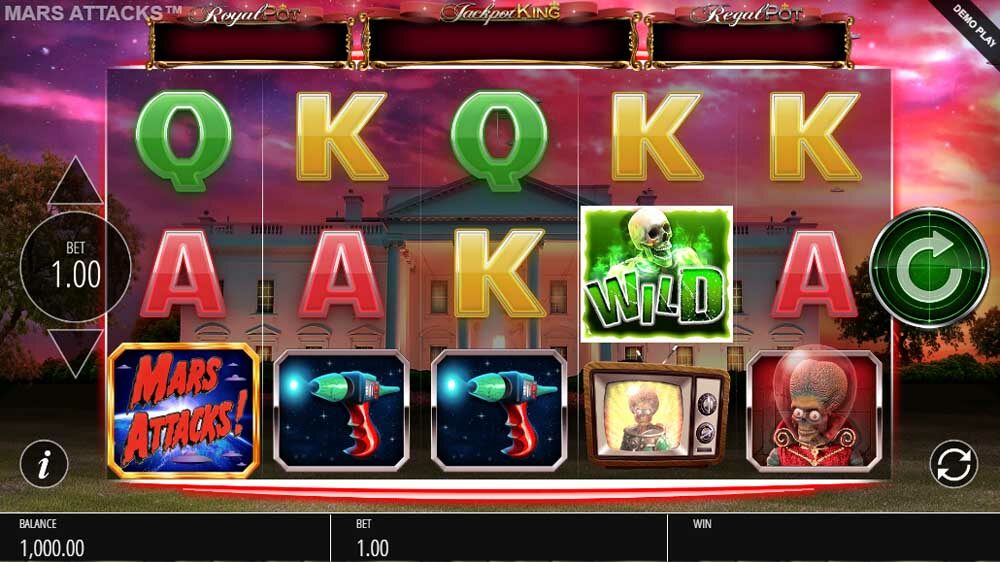 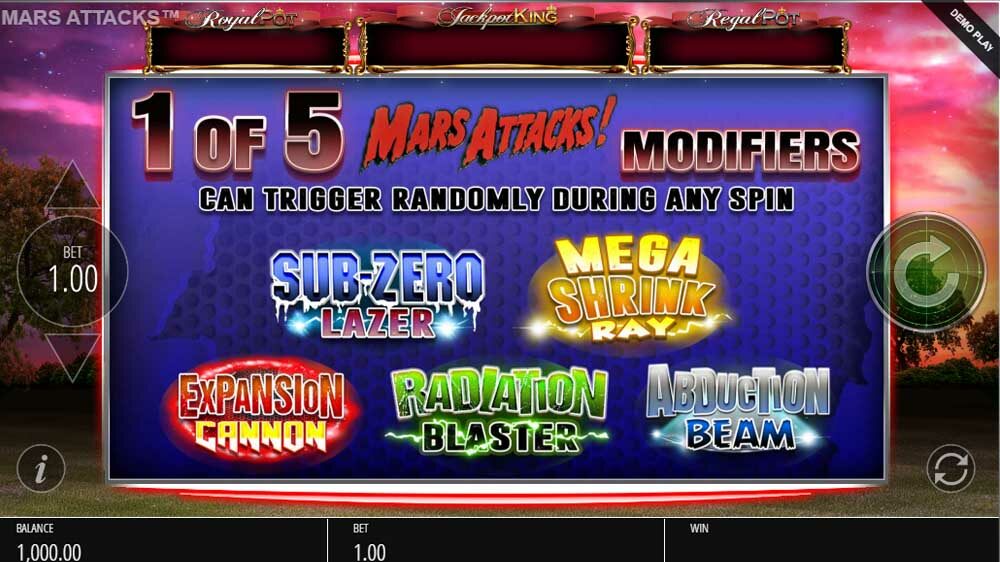 Following the 1996 action-comedy movie is the official branded slot of the film by Blueprint Gaming. Well, if you were a fan of the movie, you’re going to absolutely love the slot. As we see in this Mars Attack jackpot analysis, the game has got quite a few unique features whilst also providing a small jackpot prize as well. Although the film is arguably rather pointless, the slot is far more exciting, and you could even be sitting on a small fortune at the end of it. Let’s take a look.

First and foremost, Mars Attack is a branded slot by Blueprint Gaming which comes along with 5 reels and 20 paylines. In order to form a winning combination, you will be required to land at least 3 matching symbols on adjacent reels. This starts off with the 1st reel on the left-hand-side of your screen.

After that’s done and dusted, the good news is that you can place as little as €/£0.10 to a maximum bet amount of €/£500 per spin. That’s a fantastic betting range for the hit film from the 90s and is certain to suit many bettors. The maximum bet amount is what many high rollers will be looking at whilst licking their lips.

The slot has got a lot of perks about it but one of the best things about it is that there is a bonus feature which takes your ways to win up to 3,125 ways. This is arguably one of the best features about the slot and certainly something to keep an eye on. On top of that, the maximum win of 1,000x your stake is also something to write home about.

The theme of the game is completely based off of the 1996 American movie starring Jack Nicholson and Pierce Brosnan among others. Hence, the visuals for the official video slot of the movie looks fantastic. You’ve got the White House and some flying saucers in the background, a sight which is familiar to anyone who watched the movie.

As for the symbols, Mars Attack has got the basic royals including A, K, Q and J as the lowest paying icons of them all. However, moving up a tier, you’ll find the likes of Eyeballs, TVs, Ray Guns, Martians and the Mars Attacks Logo. Funnily enough, the Mars Attack Logo is the most rewarding one of them all paying you out 25x your stake for landing 5 on a payline.

As for the wild, you’ll be able to spot it as the Skeleton symbol. It substitutes all standard symbols on the reels except for the scatter. On top of that, it pays out the same amount as the Mars Attack Logo.

If you like what you hear about Mars Attack, you can play the video slot at any one of our many Blueprint Gaming casino sites. The video slot has got superb graphics and the visuals are easy on the eye, no matter what device you choose.

Playing Mars Attack has never been easier, and the slot is suitable for iOS, Android, Mac, PC and Tablets too. The gameplay is excellent and runs smoothly. You should be able to play the game on even the smallest of screens without any hiccups.

Mars Attack is one of the most interesting slots as it is jam-packed with many bonus features. Quite notably, they’re not your everyday free spins bonus rounds. Nope, instead, you’ve got many different bonus offers which give you a very diverse range of perks. Let’s take a look at them.

Firstly, we take a look at the base game triggers which come completely at random. There are 5 different modifiers which can happen directly after any random spin in the base game. Here’s what you can expect:

Aside from the base game triggers, you’ve also got 5 bonus games which you will join once you land at least 3 scatter symbols. Namely, they are the Spy Hunter, We Come in Peace, DNA Analysis, Martian Takeover and Final Stand features. Before we get into them individually, you’ll want to know that whilst the Bonus Games are triggered with 3 or more bonus symbols, there are a few catches.

If you land 4 scatter symbols, the Spy Hunter feature is removed and you’ll only access one of the other four bonus games. Moreover, if you are able to trigger the Bonus Games by landing 5 scatter symbols, you’ll go straight to the Final Stand feature. All Bonus Games are played on a new screen and are selected completely at random from a map of the world.

The first feature is the Spy Hunter which can only be accessed if you get the bare minimum of 3 scatters on a single spin. During this Bonus Game, you are taken to a new board and you’re given the task of uncovering Martians or Humans from hidden picks.

If you click on Martians, you’ll receive cash multipliers which are brilliant. However, stepping on humans will ultimately end the Bonus Game once you click on 3 human characters. Additionally, if you land the Martian Ambassador, you’ll win a Big Money Boost of up to 1,000x your stake.

We Come in Peace

Once you land at least 3 scatters, or even 4 for that matter, you’ll have a 1 in 5 chance of going through to the We Come in Peace bonus round. You’ll be clicking on blanks in order to fill the banks to the side of your screen.

Once the bank is full, you’ll receive a multiplier, Big Money (which is a big cash prize) or Upgrade Arrow icon. The latter improves the prizes on offer. This feature is ended when you reveal the Martian Orb.

The DNA Analysis feature is a Bonus Game which takes you to a 5×4 reel set where you’re given 5 free spins to play with. Moreover, you’re also given the chance to top your total prize with the addition of Expanding DNA wilds. The wilds cover up the whole reel and act as a standard wild tends to act. After every free spin, all DNA wilds expand by 1 height wise for bigger wins.

During the Martian Takeover feature, you’re given 10 free spins with Roaming Wilds. Basically, there are Roaming Robot Wilds which can appear on any reel and cover the entire reel. Moreover, after each free spin, they move one position to the left until the reach the 1st reel.

Last but not least, the Final Stand feature is triggered by landing either 3, 4 or 5 scatters. If you happen to land 5 scatters, you’ll advance here immediately.

During the Bonus Game, you are given unlimited free spins on a 5×3 reel set. You’ll need to keep your eyes open for the Advance Symbol which can appear on the 2nd and 4th reels. If it falls on the 2nd reel, it represents the humans whilst landing on the 4th will represent the Martians.  These will fill their respective progress bar by 1 segment.

You’ll want to land on humans as they will multiply wins. To counter this, the Martians eliminate symbols. The feature ends when 1 progress bar is filled. If the humans win, a Big Money Boost is added. We’re talking about up to 1,000x your stake!

In a nutshell, the 3 jackpots can be won by landing on Jackpot King Deluxe symbols which can fall on all of the reels. After you manage to do so, you’ll spin the reels to accumulate crowns which move you up a ladder. If you get 15 or more, you will enter the Wheel King section. It is in this section that you can win cash prizes or 3 progressive jackpots!

To sum up this Mars Attack jackpot analysis, we’ve got to give it up for Blueprint Gaming. The slot has got a lot going on and is visually stunning. Not to mention, it is one of the many jackpot slots we all know and love. The game is balanced with a mid-level volatility whilst the maximum win can be achieved a number of ways by landing the Big Money Boost. Ultimately, claiming the 1,000x your stake maximum win is a fantastic way of making a small profit.