Midas Coins Jackpot Analysis Take a look at our Midas Coins Jackpot Analysis for a complete assessment and review on what the video slot is all about. Included in this is our take on the theme, visuals, gameplay and bonus features. Not to mention, a few pointers to help you get to winning ways whilst playing this awesome slot. If you're into Ancient Greek mythology, you'll know all about King Midas, who turned everything he touched to gold. Well, hopefully you can replicate that action and land some big wins too. 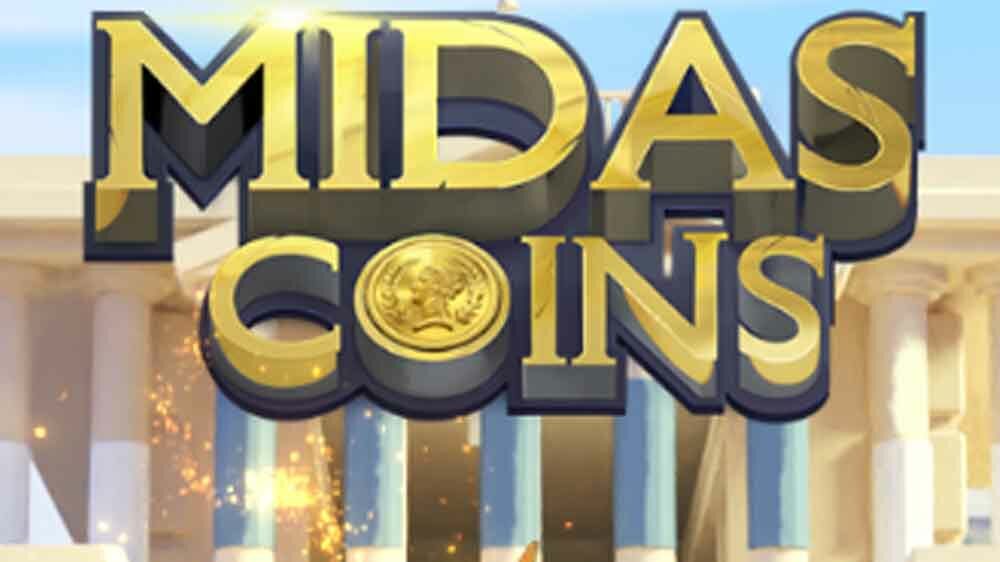 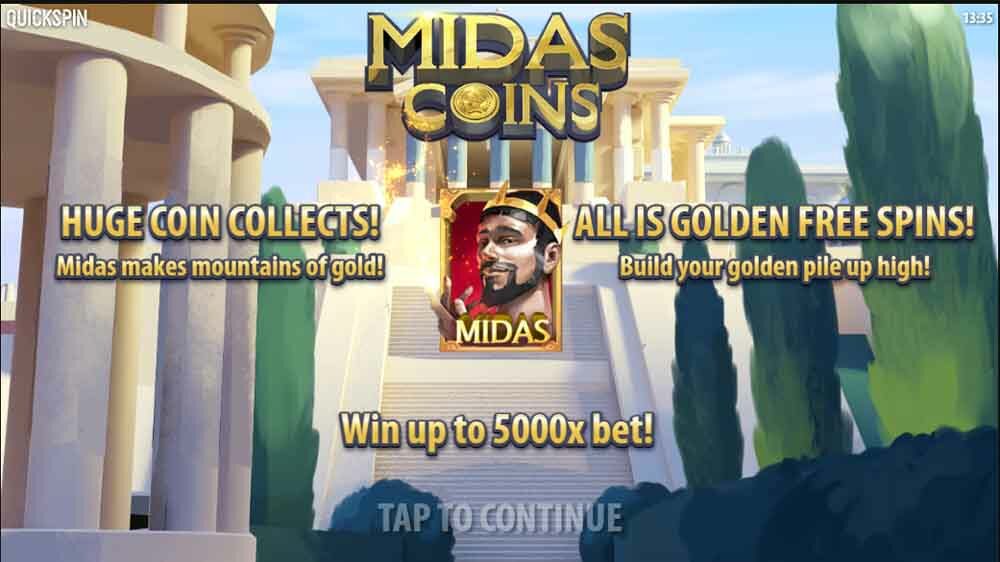 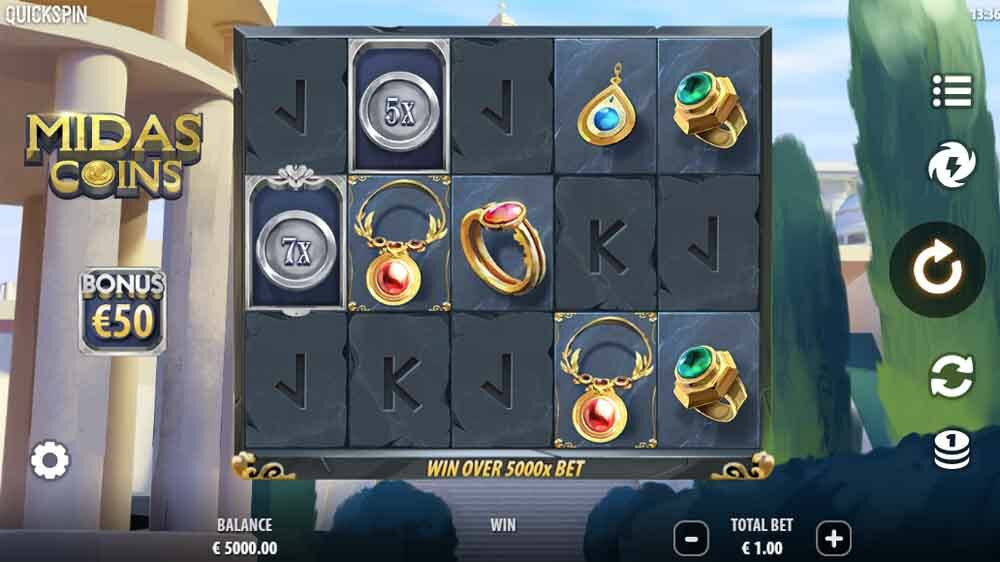 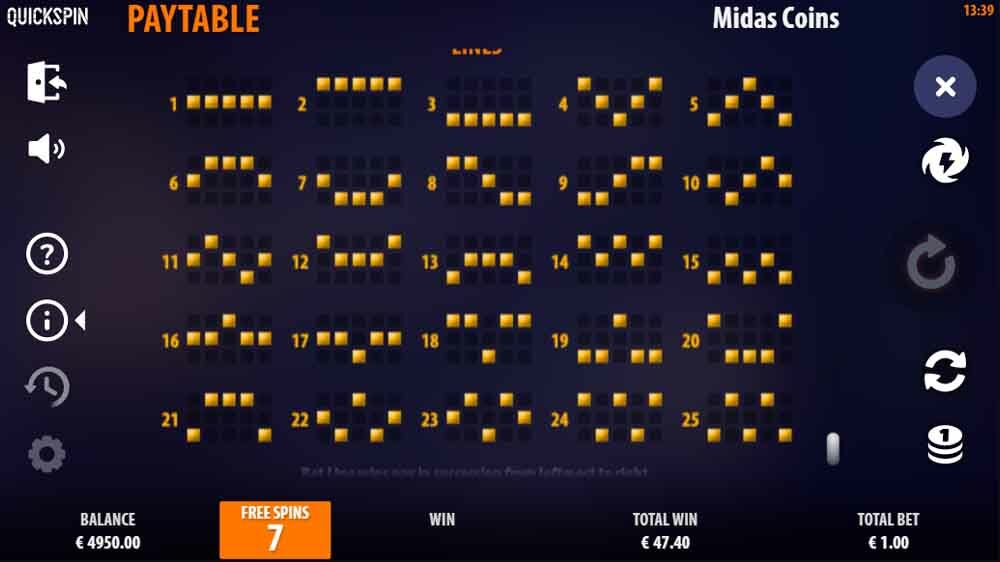 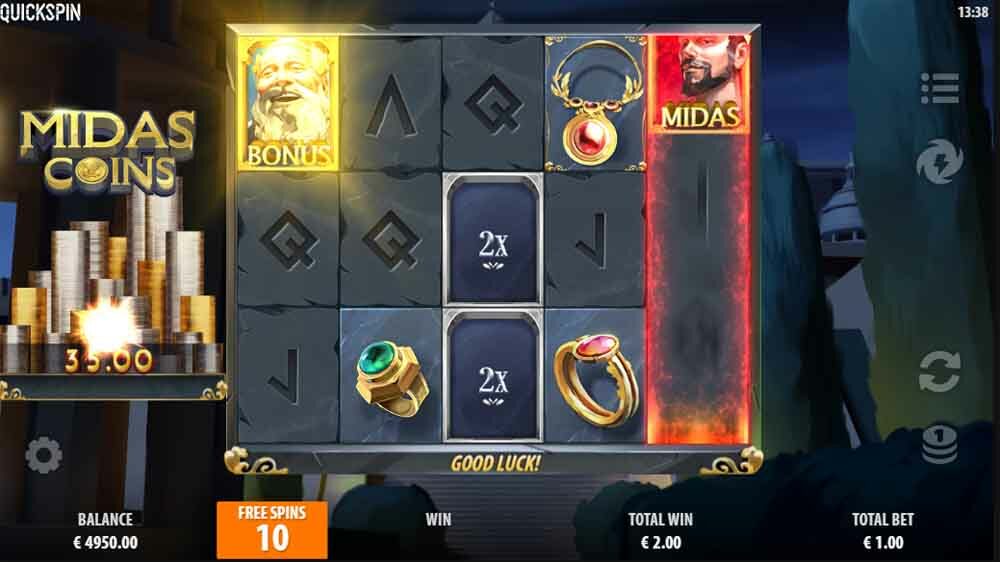 The latest Quickspin video slot takes you to Ancient Greece times surrounding one of the many legends of the king who turned everything he touched into gold. The myth was first seen as a blessing but soon became a curse when he started to change his loved ones into golden statues. What Quickspin captured in Midas Coins is a top-notch video slot with lots of rewards in golden coins. Within this Midas Coins jackpot analysis, we break the game up into many subsections and see what the main attractions of the slot are. Have a read through and see what you think.

First and foremost, Midas Coins is played out on a 5-reel, 3 row slot machine, whilst offering 25 fixed paylines. In order to form any sort of winning combination, you’ll need to land 3, 4 or 5 matching symbols or wilds from left to right. All winning combinations need to start from the 1st reel, which is the leftist on your screen.

The slot is filled with many features including the likes of the All is Gold Free Spins round. During the game mode, you’ll receive 12 free spins to play with and all coins are collected. That’s another thing, the slot has a basic setting in which you’ve got to collect gold coins. We will be looking at it in more detail later on.

According to our Midas Coins jackpot analysis, the Quickspin title allows players to wager anything from €/£0.25 to a maximum stake of €/£100. Whilst high rollers can feel satisfied with this maximum bet level, low rollers may feel that their nose has been put out of joint with the minimum bet amount. If you take a look at other jackpot slots, you’ll find the majority accept wagers starting from €/£0.10 per spin. You will be able to adjust the stake by using coins which sit at the right of the reels and + and – buttons. As for the pay table, it shows payouts in cash rather than coins.

Midas Coins players will also be happy to hear that the slot offers an RTP of 96.02% which is fairly decent. The percentage isn’t too low and is generally considered to be a fair return. As for the volatility, it is rated as mid-high which means big winners are also present in the game. The maximum return you can get from a single spin is 5,000x your stake.

As mentioned before, Quickspin took on an Ancient Greek theme surrounding the legend of King Midas. The visuals for this slot work well and so do the animations when clicking on the spin button. Ultimately, it is a neatly presentable slot.

To complement the simplicity of the slot, there is also a soundtrack which gives the game a regal feel to it. Namely, you’ve got an orchestral score which is playing smoothly in the background. This sets the tone of the game and truly takes you on this mythical Ancient Greek journey.

Whilst you’ve got a palace and trees in the background, the reels are made up of stone. The lower value cards in this game are the royals from A to J whilst the higher ones include a Pendant, a Ring and a Bracelet. All of the higher value symbols are gold. The most rewarding symbol in the game is a gold Necklace which pays you 32x your total stake for landing 5 on a payline.

There is also a wild in Midas Coins which is represented by a gold statue of Marigold. Just as all standard wilds do, it will replace all symbols barring the scatter and also pays out 32x your stake for filling a complete payline. The scatter, on the other hand is represented by the Satyr. It is key to unlocking the All is Golden Free Spins bonus round. But more on that later.

We advise you to take the time and actually look at the pay table before playing for any real money. By doing so, you’ll know exactly what you get with each symbol and which ones to look out for. This leads to a more enjoyable playing session and also excitement when those symbols fall.

If you’re curious to try out Midas Coins, simply head on over to one of our Quickspin casino sites. You can find the full list at the top of this review page. The slot works well on all devices, probably because of the simple gameplay and elegant design. There’s nothing too flashy about Midas Coins, it’s a real reliable slot with a certain grace to it. Feel free to play it on even the smallest of screens including iOS, Android, Tablets, PC and Mac too.

There are two main features in Midas Coins which heavily feature Midas himself. He is present to collect coin prizes in both the base game and the free spins feature. The two features are the Midas Coin Collect and All is Golden Free Spins bonus round. Next up, we take a look at them individually.

One of the many things you’ll notice when playing this slot is that there are coin symbols which can land on reels 1, 2, 3 or 4. When these fall onto the reels, they usually come with multiplier prizes attached to them. The boosters will see you receive an award with the potential to be anything between 1x and 500x. However, keep in mind, most of the time, they won’t award anything.

To make the most of this feature, you’ll need to land Midas on the 5th reel. By doing so, the coins will all become active via the Midas Coin Collect feature. Thus, all those potential big winners will be collected by Midas and then added together. At the end of the spin, you’ll receive a grand total prize, should Midas collect the coins.

All is Golden Free Spins

In the free spins round, Midas is also central to the action yet again. First of all, you’ll need to land 3 Satyr scatters on reels 1, 3 and 5. Scatters will not be able to fall on the 2nd or 4th reels. When you manage to do so, you’ll receive a 2x stake payout as well as claiming 12 free spins for the bonus round.

To the left-hand side of your screen, you’ll see a stack of coins. The free spins round starts at 3x your stake for the first free spin. For each additional coin symbol that lands, you’ll receive the amount added to the stack. When Midas lands on the 5th reel, he will collect the total value of the coins on the stack. Basically, he acts as the cash out for that prize.

The good thing about the free spin round is that the coins don’t reset after Midas has collected them. They keep on growing throughout the feature. Midas can land multiple times on reel 5, meaning you can collect the Coin Stack multiple times too. Likewise, re-triggers are also possible. Landing 1, 2 or 3 Satyr scatters will warrant you with an additional 1, 2 or 3 extra free spins.

In some countries, there is also the option to buy Free Spins. The Buy feature is a fee of 50x your total stake which will take you to the All is Golden Free Spins round without having to land scatters. It is only available in some countries though.

One of the biggest questions you may be wondering is whether or not the Quickspin slot has a lucky jackpot prize. Sadly, Midas Coins does not come with any such jackpot. It is a real bummer, but the slot still can be profitable to some.

If you play with a maximum bet of €/£100, you could potentially be looking at a €/£500,000 cash out prize in the making. If you’re not convinced, head on over to our latest jackpot ratings to find other slots with major rewards.

Thus, to conclude this Midas Coins jackpot analysis, we’ve got to give it up for Quickspin. The online software supplier group have proved their worth in gold with an exceptional slot. The gameplay and graphics are simple, but the features are quite rewarding.

Ultimately, if you’re looking to make a profit, we recommend you stay in the All is Golden Free Spins round for as long as possible. Although you’ll need Midas to collect most of your winnings, the Coins at the side of your screen will only keep on increasing whilst the mode is active. Landing 3 Midas symbols on the 5th reel in a row could be massive!

We recommend you try out the free play mode before playing for any real money. By doing so, you’ll see exactly what Midas Coins is all about and whether or not it tickles your fancy. Also, be sure to check out the pay table once you get started.