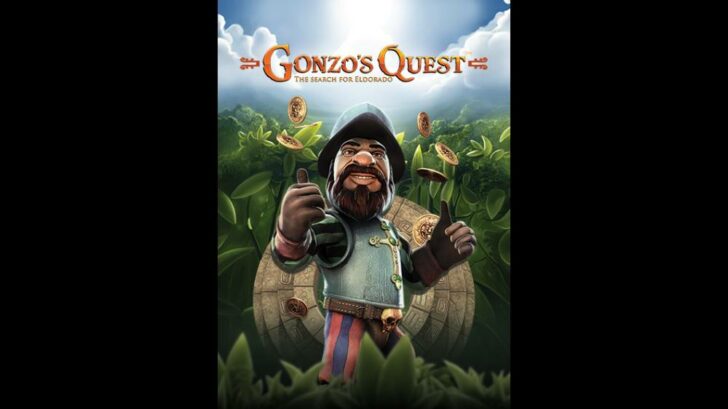 When it comes to thinking of the most popular online jackpot slot games, then we’d have to concede that Gonzo’s Quest is certainly up there with the greatest. Considering that it has outstanding cutting-edge 3D animation, with fabulous graphics and bonkers gameplay, then this is no surprise. It takes the whole genre of online slots games and then turns it on its head. For example, the reels do not spin. Instead, there is an “Avalanche” feature. This means that the symbols simply fall into place, and then explode with the winning combinations. As a result, you have a possibility of winning from the get-go. And from playing just a single spin. Gonzo’s Quest also has free spins, a high RTP and increasing multipliers. This makes the game both entertaining, as well as being possibly very lucrative.

The slot itself comes from the slots stable of one of the best jackpot game providers, NetEnt. It boasts a great RTP of 95.97%. There are 5 reels with 20 pay lines. The game also offers many bonus features including wilds, cascading symbols, free spins and multipliers. The maximum bet is £200. What’s even better, is that you can play the game as a free demo. By being able to practice without spending any of your bankrolls will only help to increase your jackpot winning chances.

After you log in and launch the game, the first thing you’ll see is a video introduction. This acts as a means of setting the scene and the narrative will explain the storyline which is immersive from the very start. It’s at this point you’ll be introduced to our intrepid hero, Gonzalo Pizarro, who’s was a real-life Spanish Conquistador explorer. In 1541, he finds himself looking for El Dorado, the City of Lost Gold, in the dense Peruvian jungle east of the city of Quito. You’ll see that the game has the traditional slots setup of 3 rows of 5 reels, along with 20 fixed pay lines. You can find this slot at King Billy Casino. And they also are giving all new players a fantastic welcome bonus of 151% up to €/$500 plus 51 bonus spins!

If you make a winning combination then the blocks will explode and new ones will fall into their place. Gonzo’s Quest also has an “AutoPlay” option which allows you to play at a much faster rate. Also, if you like, you can use the spacebar in order to spin. The game includes many free spins and these are called “freefalls” thanks to the falling-blocks style of play. Because Gonzo’s Quest has an RTP of 95.97%, it means that playing for a long time is going to be more beneficial. Here at Jackpotfinder.com, we only recommend that you play on slots with an RTP above 95%, then Gonzo’s Quest is certainly well above the industry average. 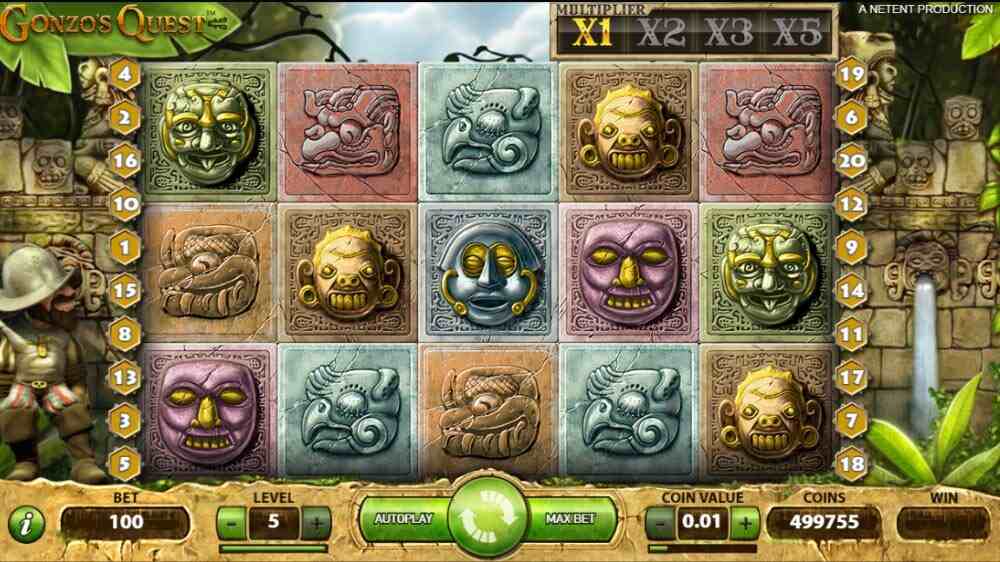 One factor that causes many players to be drawn to Gonzo’s Quest is the game’s design.  For example, the symbols are the various Mayan gods and creatures which have been chiselled out of stone blocks. Now if you manage to score the highest value symbol, then it will increase the payout by 2,500x for 5 matching symbols. The wild symbol is a question mark on a grey-coloured stone block in yellow. You’ll find this wild will substitute for all other symbols. Thanks to this, your chances of triggering a wild, in order to win the jackpot online, are greatly increased.

Gonzo’s Quest has a great betting range which allows options for all types of players’ bankrolls. You can adjust the coin value to levels between 1 and 5. As a result, the minimum amount for a spin is just 20p. Yet if you are a high roller, then you can set the maximum at up to £200 per spin. As far as payout goes, this would mean that, with 20 fixed lines, and the highest paying symbol being 2,500x, then in theory you could actually win 50,000x your initial wager. Having said that, if you take into account the unlimited number of free spins and increasing multipliers, then thanks to the avalanche feature, your cash prizes could go much much higher.

Talking of the avalanche feature, let’s have a deeper dive into what exactly it involves. For a start, a winning line will kick off the avalanche feature. Immediately you’ll see the winning symbols explode leaving an empty space. At this point, new symbols will fall down and replace them from above. This function allows many wins from a single spin. What’s more, the avalanche feature will continue until no new wins are created. Also, you’ll notice that line wins will also trigger an avalanche, which we’ll come with even higher multipliers. Then there are various special rounds. These also offer bonuses in the form of additional freefalls.

As you’re playing, you’ll naturally trigger the avalanche feature, as every single line win will activate an avalanche. Thanks to an increasing number of multipliers, then your payouts receive a welcome boost whilst you’re playing. We should mention that the freefall feature will activate less frequently. But when you do manage to hit this, it will allow for even better multipliers. These can range from 3x up to 15x your wager, depending on the number of successive avalanches that trigger.

Playing With Your Mobile 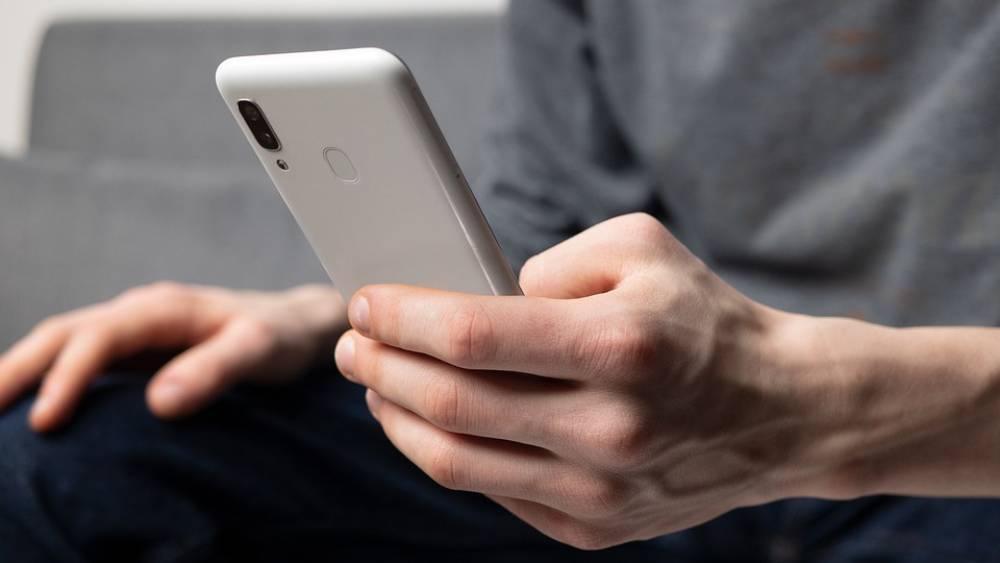 It goes without saying that in the age of mobile technology, Gonzo’s Quest is available across all portable devices. NetEnt has produced a ”touch” version of the game, for better finger swiping. Regardless of the platform, you’ll find the gameplay to be both exciting and captivating. You’ll quickly learn how to win the jackpot online. This mobile version of the game is pretty much identical to the one you’ll find on your PC. Though in order to to get the maximum area of play on your phone screen, the options and other levels are found on a separate menu. To try Gonzo’s Quest on your phone, why not head over to King Billy Casino. They are offering 25 free spins to help you start.

Having played the game extensively both before and during this review, we instantly fell in love with the game. Thanks to its colourful themes and unique gameplay, we were happy to follow the adventures of the little Spaniard in finding the Lost City of Gold. We should also point out that the game comes with great sound effects. These help to create an immersive atmosphere and jungle ambience. And they certainly help in building up the tension and intensity of the gameplay. We also made use of the AutoPlay feature, which in its own way, was a very satisfying experience as well. All in all, Gonzo’s Quest definitely gets two thumbs up from us!