Hammerfall Jackpot Analysis Within this review, we take a look at the Play'n Go video slot, Hammerfall. The game is based on the Swedish metal band, Hammerfall. It features the mascot of the band who appeared on their first album release. Thus, if you expect to play this game, you'll be in for a wicked time with the Cluster Pays mechanic and also some pretty hardcore Swedish music playing in the background. It's all very unique in style and certainly something you're not going to want to miss out on. 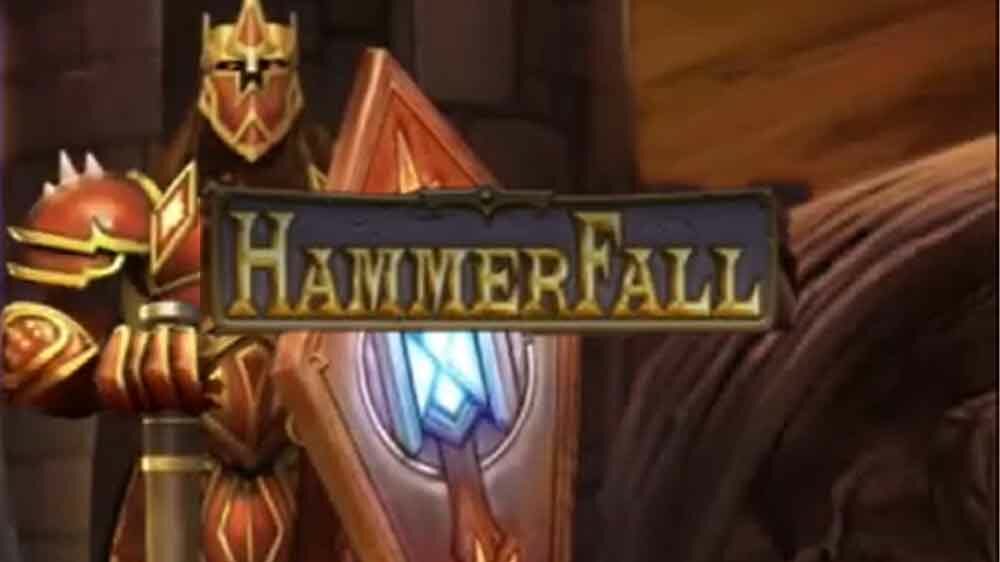 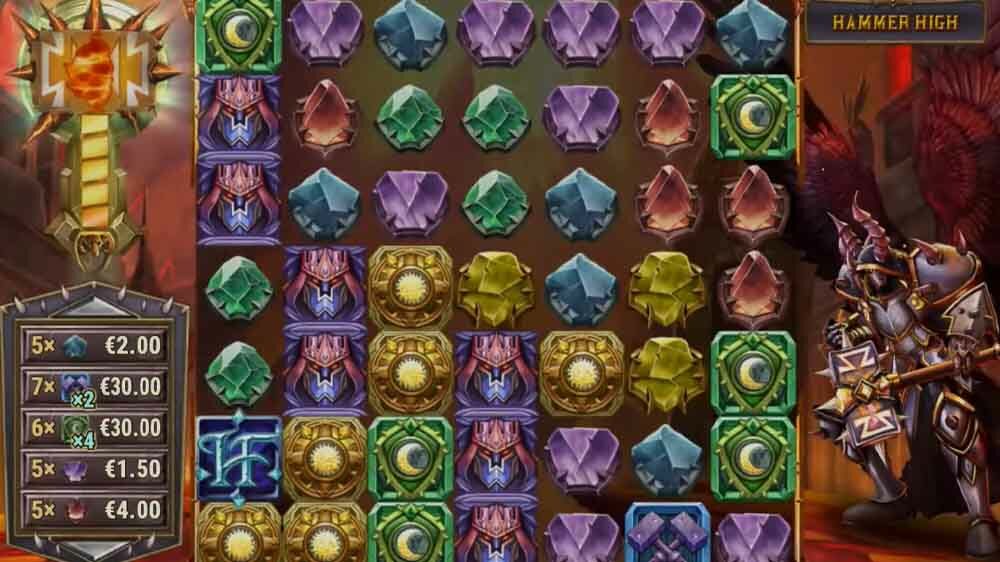 Hammerfall is a brand-new video slot by Play’n Go which follows an awesome Cluster Pays engine. If you’re curious to join in on the fun, the slot is based off the Swedish power metal band. The action takes place on a 7×7 grid and is full of surprises at every corner. Have a read through our Hammerfall jackpot analysis for a full disclosure of what to look out for in this online video slot.

Hammerfall is played on a 7×7 grid which uses the Cluster Pays format for the gameplay. When playing Hammerfall, you’ve got to be on the prowl for landing symbols in the same place. If you’ve got a minimum of 5 symbols adjacent to one another, in clusters, you’ll record a win. Obviously, the more symbols you’ve got in the cluster, the bigger the payout is.

Hammerfall consists of many bonus features including the likes of cascading wins and Super Tiles. These come with multipliers which can reach up to 3x. There are Wilds, transforming symbols and even 4 Destruction game modes available. But more on that in due time.

The minimum betting amount for Hammerfall is as little as €/£0.20 to €/£100 per spin. This total is ideal for both low and high rollers to make the most out of. You will be able to adjust the betting stake by using + and – buttons at the side of your screen. There is also an option for Autoplay and for Turbo Spins to be used. However, this is only available for specific countries.

According to our Hammerfall jackpot analysis, the video slot has got an RTP of around 96.2%. This is slightly above the average mark but nothing short of what is expected from a Play’n Go title.

As for variance, the volatility in Hammerfall is pretty high, around 8 out of 10. Broken down, that means you won’t win too often but when you do, the payout will be big. Hopefully, it will be somewhere close to the maximum win amount, which is 30,000x your total stake.

Play’n Go got the idea to design the Hammerfall slot based on the Swedish power metal band. Should you decide to play the game, you’ll be joining Hector, the band’s mascot, and his powerful hammer. Hector appeared on the first album of the band and has become the face of the group.

With a heavy metal theme involved, the slot has got high-octane action. It is visually pleasing on the eye, as with most Play’n Go slots, and is crispy clear to play through. The gameplay isn’t too difficult, and the presentation is superb. One of the main attractions for Hammerfall is that the game is full of the best songs by the band.

When launching Hammerfall, you should head on over to the paytable. This is a detailed script which gives you an idea of exactly what each symbol is worth and if they’ve got anything unique about them. To begin with, there are 5 lower value gemstones. They’re the lowest tier in the game and pay out rather poorly.

In comparison, the higher value symbols are represented by various colored shields with Moon, Hammer, Sun and Hector on the cover. Hector, the band’s mascot, is the highest paying symbol in the game. Landing him pays from as little as 2.5 to a maximum of 500x your total stake. In order to get 500x your stake, you’ll need to land Hector in a cluster of at least 15. As for the Wild, it can be depicted as the Hammerfall Logo and will substitute all standard paying symbols.

If you’re curious to try out Hammerfall for yourself, simply head on over to one of our many Play’n Go casino sites. You can find the full list at the top of this slot review. The visuals and presentation for this slot are second to none, with crystal clear clarity as well. As for the gameplay, it is simple, which makes Hammerfall very simple to grasp.

You will be able to play this slot on any mobile device or smart machine. That includes the likes of iOS, Android, Mac, PC and Tablets too. Playing Hammerfall on even the smallest of screens will not be a problem either.

Now that we’ve covered the presentation and basics, we look at the gameplay features available in Hammerfall. There are a total of 10 different bonus features making up the title. This ranges from things like cascading wins to Lightning Wilds. You have also got 4 randomly triggered Destruction features to help you form clusters. Let’s take a look at them individually.

First and foremost, as this is a cluster engine game, you will be able to make the most of Cascading Wins. Thus, whenever you form a cluster, all winning symbols will be removed from your screen. This makes way for new symbols to drop down into their empty positions and fill up the grid.

Next up, we take a look at Super Tiles. These are highlighted positions behind the grid on every spin. It is important to know that they get highlighted completely at random.

Whenever you form a winning combination on a Super Tile, you will receive a Lightning Wild symbol. The winning symbols in the cluster are removed by the Lightning Wilds remain on the grid for your next cascade.

Discover Magnificent Forms of Mobile Gambling at the BitStarz Casino

The Song Feature is triggered by a Hammer Meter which is at the side of the reels. Landing a cluster or winning combination will result in the Hammer Meter charging up. Once you’ve got 25 winning symbols in place, the Hammer Meter will be full. When this happens, a Song. Feature is activated. There are 3 different songs available which will take you from one world to another. Here is what they offer:

During the Song feature, all wins are paid and you move on to the next world. It is especially important to note that the Song feature is triggered randomly, and you will not be able to choose which song bonus you please.

You will also be able to trigger the Hammer Meter with 50 symbols, should you overcharge the 25 for Song feature. By doing so, you activate the Hammer High feature. This will give you 1 free spin with all 3 Song features awarded one after the other. Once this happens, you move onto the next world.

Whenever you hand a non-winning spin, 1 of 4 Destruction features can be activated. Here’s what the features can offer.

Unfortunately, Hammerfall is not one of those jackpot slots we all know and love. The title lacks a proper lucky jackpot prize which can be triggered by lucky symbols or bonus wheels. However, to write it off completely would also be foolish.

Thus, to conclude this Hammerfall jackpot analysis, we’ve got to give it up for Play’n Go. The online software supplier group have yet again proved their worth in gold with a fantastic video slot both in terms of gameplay and aesthetically.

Hammerfall has got a whole lot of action happening. Aside from the Cluster Pays mechanic, the cascading wins means that there’s always something to look out for. There is no real strategy for playing Hammerfall as the gameplay occurs so quickly and there’s so many different bonus features to look out for. However, we would recommend trying to save up the Hammer Meter so that you get to experience the Hammer High feature in full. That free spin will be on the receiving end of all three Song bonuses. Thus, you only pay for two (25 winning symbols) but receive all three songs. If you went about, it the other way, you’d need 75 symbols to fill up the Hammer Meter three times.

Ultimately, if you want to have fun and perhaps make a few quid, you can’t go wrong with Hammerfall. The gameplay is all about the Cluster Pays and Cascading Wins but it is enjoyable. Particularly thanks to the soundtrack. Log in to one of our Play’n Go casino sites to play this new slot for yourself or head over to our latest jackpot ratings for alternatives.

Click here to visit the BizStarz Casino for the newest slots