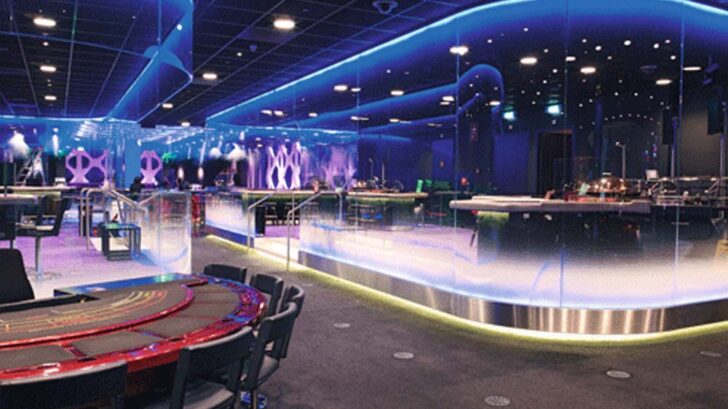 On the whole, if you’re going to gamble, then the location isn’t that important. So when it comes to locating casinos, there have been many in easy to get to spots, like major hotels and resorts. But some have travelled further afield in their search for gamblers. Maybe these moves are down to local gaming laws or just because they were looking for something different. Let’s take a look at a few of these casinos in strange places.

When you want to go to the casino, we’re certain that not many people would consider paying for a trip to the airport. However, if you find yourself arriving early or waiting for a delayed flight, being at Amsterdam Airport might be the perfect spot. The Holland Casino at the Schiphol Airport offers plenty of table games, though not a full gaming floor that you might be used to at the casino. But never the less, it’s a great way to pass the time. Interestingly enough, it was the only airport casino we could find. This is strange considering what a great opportunity this is to have a captive audience.

The US is chock full of silly laws trying to put a stop to gambling. Some states still have no provision for gambling. On the one hand, they like to play the moral card. But on the other, these politicians love the kickbacks from the casino business, as well as the chance to put some coins into the state coffers. A great example of how one gambling establishment got around state gambling laws can be seen at The Puddles. As the name suggests, it’s a floating casino. At the time of construction, the state of Illinois would only allow for riverboat gambling. So, some smart person built a small lake (hence, the Puddles) and built a casino on top.

On the Rails (X-Train Casino – LA to Las Vegas)

It kinda stands to reason, that if you’re on the train and on your way to Las Vegas, then there’ll be a facility to gamble on the train itself. Welcome to the “On The Rails Train Casino.” This luxury train began its operations in 2011. As it’s a five hour trip between Los Angeles and Las Vegas, that’s plenty of time to keep gamblers busy. The train also has a sports bar and a restaurant. Technically, you could at the very least win back your train fare.

And in the Sky! (AirJet Airplanes)

If there’s gambling on a train, then why not on a plane? Well, let’s introduce you to the AirJet and Designescence Casino. It goes without saying that you’ll not be finding a complete casino gaming floor in such a small space. But there are enough gambling amenities and jackpot games to keep passengers happy on this luxury aircraft. If you’re bored of playing in the plane, then logon to the plane’s wi-fi and make your way to 22Bet Casino where you’ll find a huge number of games waiting for you..

Found in the outback of Australia, the Desert Cave Hotel is situated in the tiny town of Coober Pedy. This is a weird and wonderful old mining town and a haven for those who are endeared to the ideals of outdoor living, with many cave houses. In the hotel, deep underground, you’ll find a tiny casino offering just 16 slot machines. If you’re looking for a unique gambling experience, then playing in this casino will fulfill all those fantasies.

Of all the casinos in strange places, probably the most difficult one to reach in the world is the one situated at the Antarctic base in Argentina. And though it’s called a “casino”, the truth is that it’s closer to being a community centre which sometimes doubles as a place for light gambling. The base is one of only two civilian settlements in Antarctica (the other being the Chilean Villa Las Estrellas) and was constructed in 1953. It presently houses 55 people. If you happen to be in the area, don’t hesitate to drop in and play a couple of hands. For sure it’s the best casino to win the jackpot within a few hundred kilometres.

If there’s one thing you have an abundance of in prison, it’s time. So gambling can’t be far behind. In the mid 19th century, a casino was opened in the Nevada State Prison. It offered all the usual games and functioned for over three decades before being closed down in 2012. The prisoners could play games from blackjack to craps and even place tiny wagers on both the table games and on sports. It’s believed to have helped the inmates maintain a good level of behavior.

It’s modern folklore to claim that Bally’s Casino in Las Vegas is haunted. The idea behind this comes from the fact that the casino was constructed on the site of a previous casino that completely was burned to the ground in the 1980s. Many patrons perished in that fire and some claim that their lost souls are still walking the corridors of the modern building. Many visitors to both the hotel and the casino have reported seeing ghosts. Though we’re much more likely to attribute any sightings of ghosts to all those comped drinks at the casino table.

This historic house was constructed as a medieval hall in the early 1300s. Today it’s run as a luxury hotel, having been converted into 21 bedrooms, along with a 96 seat dining room, and even a ballroom. In the modern basement, there’s a 30 person casino. This offers high stakes blackjack and roulette. There’s a tiny separate room for jackpot poker. The ceiling height is so low that everyone has to bend down slightly to get in. The styling is fantastic with a thoroughly James Bond feel. If you’re ever passing through the quaint Somerset town of Yeovil in the southwest of England, pop in and check it out.

With casino design getting wackier and wackier, then it’s no surprise to find a company has already introduced a virtual reality casino. First opened in 2015, the SlotsMillion Virtual Casino is situated in the only city in the world that’s fitting, Las Vegas. Wearing a headset, players can explore all the gaming options on a virtual interactive casino gaming floor. You can wander around, stopping to play the slots machines, or play at the table games with virtual opponents. It must be odd playing high stakes blackjack with some avatars.

We prefer real casinos to win the jackpot and have a better gambling experience. Failing that we’d prefer to use our phone to go to 22Bet Casino. There’s a nice welcome bonus as well as a massive selection of games.

Now you know where these unusual casinos in strange places are, it’s time to grab your passport and pack your bags. Going to the local casino and playing online are things you can do at any time. But for a proper gambling experience, then why not look for the new and the exotic. Not only will you enjoy your gambling experience, but will see a new part of the globe.