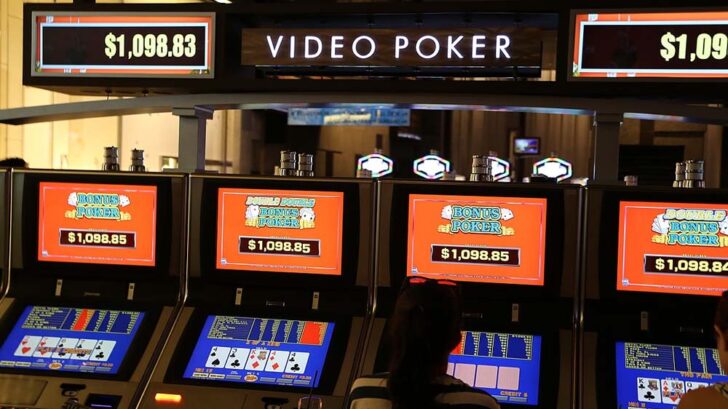 Go into any casinos to win the jackpot, sit yourself down and start playing on a video poker machine and we guarantee you’ll think you’ve gone to gambling heaven. Double Double Bonus, Deuces Wild, Better, Jacks….the list goes on and on. And every one of these is a great time. Thanks to the sheer multitude of options and games, players have formulated their own video poker jargon or slang over the years. If it’s your first time playing video poker, you might be slightly confused as to what all these terms mean. Well, today we’re here to rectify that situation. So, sit tight, and we’ll delve into the world of video poker slang.

This describes the best game you can find in terms of its paytable. It gives the largest possible payback percentage. An example would be in a basic game of Jacks or Better, most machines will pay out 9 coins for a full house and 6 coins for a flush.

Here’s what the Jacks or Better 9/6 Full Pay Table:

If you’re using basic strategy, then using this paytable will give you a payback percentage of 99.54%. This makes the game one of the best in terms of payback percentages, that you’re going to find in the casino. But not everything is as good as it might first appear. Someone in casino management must have realised that adjusting the paytable, even by as little as one coin every hand, would increase the house edge. Take a walk around the video poker gaming floor, and you’ll be able to find paytables of 8/6 and 9/5 on Jacks or Better.

This doesn’t mean that the games are rigged, but if you don’t have your wits about you, it’s easy to be tricked by these tables.

If you’re not paying close attention, then all you see are the same numbers you’re used to seeing like the 250 coins for a Royal Flush or 50 coins for a Straight Flush. You’re not thinking about why those full house and flush payouts are different. Yes, it’s only a slight difference, but in the long term, it’ll have a drastic effect on your bankroll. It’s the same with slots. If you fancy a change and want to try your hand online, then head over to Bet356 Casino. You’ll find the exact type of video poker you’ll enjoy.

These “low pay” versions of video poker are looked down on by serious and alert players. The casinos are already making enough bank without shaving points off your payback percentages.

Let’s take a deeper look at how the concept of payback percentages actually works in practice when playing video poker machines. If you’re playing Jacks or Betters with a payback percentage rate of 99.54% on a 9/6 full pay, then for every $100 you put into the video poker machine, you should expect to receive back $99.54 in the long run. Keep in mind that this is the theoretical probability, so in the normal course of playing virtually anything can still happen. The “house edge” can be looked at as the inverse of the above. So, the house edge for 9/6 game of Jacks or Better is 0.46%.

It’s even possible to find a payback rate of over 100% provided the player is using basic strategy. Deuces Wild is the game everyone in the casino is chasing as it offers a 100.76% payback rate on a 15/9/5 full pay game. Unfortunately, you will not find many of these video poker machine games that offer such a high percentage payback around the casino. They are few and far between. If you’re playing video poker machines, and want to increase your jackpot winning chances,  then there’s another more common version of Deuces Wild, called “Not So Ugly Deuces”, which offers a payback of 99.73%, which is higher than Jacks or Better.

Kicker (With Four of a Kind)

In the video poker game Double Double Bonus, the paytable is slightly different from other versions of the game. It’s stretched out to divide four of a kind hands according to the ranking of the fifth card. This card is known as the “kicker”. It can mean the difference between 160 coins and 400 coins. The idea is to land four kinds of hands, and couple them with an ace, 2, 3, or 4 kicker. If that happens then you’ll earn yourself a premium jackpot payout which will be the same that’s paid out for a Royal Flush.

There are several games that make use of the kicker, so make sure you take the time to check the machine’s games table to know which kickers you might want to hang on to before you start to play.

In the game of poker, a “Pat Hand” is any hand that doesn’t need a draw to improve it. If you’re playing video poker machines you might see the 4-5-6-7-8 screen lights light up for a pat straight. If you can get 5 cards in the same suit in order, then that’s a Pat Flush. if you happen to be playing Double Double Bonus, then it’s even possible to get a pat quad aces, along with a kicker. If you receive a pat hand, then there’s nothing more to do. make sure you lock up those cards for an instant payout.

You can, of course, break down your pat hand. If you receive an Ace, King, Queen, Jack, and ten, but only four of those cards are suited, then you’ll have a dilemma. In this case, you could keep the straight pat hand intact and just lock in the four suited cards. Or you could keep the royal flush combination and pray to hit a fifth card to score the 4,000-coin jackpot. One of the most important jackpot winning tips and tricks is when you’re playing basic strategy, then the advice is to chase the royal flush every time.

In a five-card draw game of video poker, royal flushes are extremely rare. The odds of scoring a pat royal flush are 1:649,740. That makes it a very long shot indeed. If you factor in the video poker draw odds and the holding round, your odds of getting a royal flush are closer to 1:40,391 hands. The “royal circle” refers to this 40K-hand interval. Players can expect to go through many hands before landing a royal flush. Be warned, it may take some time!

In the meantime, if you’re looking for the best casino site to play, then we recommend Bet365 Casino. They have a very sweet welcome bonus as well as a huge variety of games, including all types of video poker.

If you want to have a better chance over the casino, then video poker games are not a bad place to start. That’s because playing video poker machines can, in some ways, allow you to have some control over the action. Yes, of course, those five cards that show up on the screen are random, but you get to choose which ones to hold or fold. There is a basic strategy to the game, and if played correctly it does make Jacks or Better a favourable game.