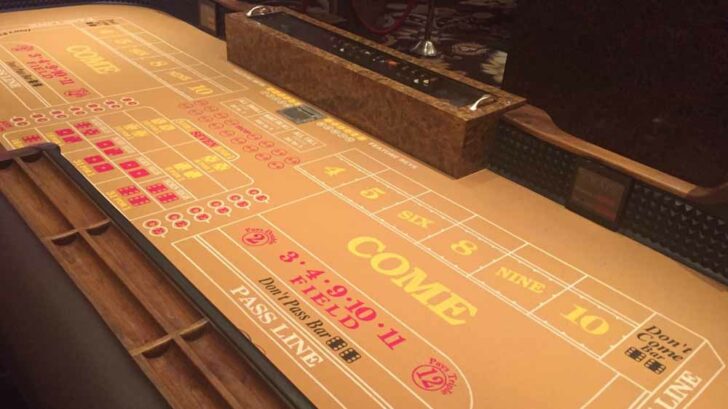 Though craps are one of the simpler jackpot games which more or less rely entirely on luck, craps players can develop bad habits that affect their chances of success. But the real problem with playing with a bad habit is that it’ll cost you money. Let’s have a look at some of them and how we can recognize them and find a cure…

Stand next to the craps table and you’ll witness all sorts of bets, along with a wide range of wagering methods. There appears to be a mixture of confidence coupled with a bit of superstition. And you’ll see plenty of craps players who honestly believe that they can somehow exert an influence on how the dice lands. Before we dive headlong into the problems we see in craps, let’s first look at an important habit every craps player should have as a default setting.

The odds wager is the most important wager option on the craps table. Though in truth, not all craps players use it, this single wager should be the biggest gun in your armory. What probably puts most punters off this bet, is that there’s no spot for it marked on the table and you can’t make this wager without putting down a come-out wager first. In fact, because of the lack of table markings, many players don’t even realize that this wager exists. Now, this bet is usually placed behind the come-out roll wager when a point is being set. If you’re unsure about its placement, simply ask the croupier running the game and they’ll be only too happy to help you out.

The only wager in the casino with true even odds is the odds wager. In theoretical terms, this means that the house edge is 0%. But in practical terms, the come-out roll will have a casino edge and you have to make it first. Like this, the casino still has the edge over your total bet amount, even if there are fair odds on the odds wager. So, as a craps player, please make the effort to break the bad habit of ignoring the odds wager. You should be making a habit of placing it during all rounds to increase your jackpot winning chances.

Betting Money on the Pass Line

In craps, the popular bet is on the come-out roll on the pass line. And though it’s not a disaster as far wagering goes, it does leave a lot to be desired. That’s because it’s not the best option in this situation. The craps players’ best wager on the come-out roll is the don’t pass. And why is that, you might well ask? Well, the casino edge on these two bets is very small, so you’d be wasting your wager with a pass line bet. You’ll harvest every possible edge with the don’t pass line, even if it’s only a tiny edge. They don’t pass line wager has a house edge of 1.36% as opposed to a pass line wager, which offers a 1.41% edge. As you can see, though it’s not a matter of life and death insignificance, it does make that little bit of difference.

In terms of real money, if you make 200 come-out rolls with $40 wagers on each, then it follows that your total risk is $8,000. Now, your expected loss on a pass line wager is $112.80. But risking the same sum but with don’t pass will give you an expected loss of $108.80. So the difference is $4 in risk. OK…it’s not a huge life-altering amount. But it’s more to do with a mindset that’s concerned about every single cent. That’s why you should want to keep that $4 for yourself, rather than simply give it to the casino.

To be absolutely honest, there are only two wagers you should ever make in craps. One is the odds wager and the other is the don’t pass. If you’re making any other wagers apart from these, then you’re in trouble and need help. You have a costly, as well as a bad habit. All the other bets on the craps table are not so terrible. But they all have a higher house edge than the two we mentioned. So don’t make any of these other wagers. Just stick to the two important ones.

Many craps players think they have a system to take to the casinos to win the jackpot. Unfortunately, every casino betting system is a scam. And it’s the same for all those betting systems that you see for sale on YouTube. They’re all a scam. Maybe the only system that not a scam is if you’ve learned to count cards. But that’s it! You will not see too many craps systems for sale. That’s because, over the years, they have all lost their shine. None of them had a single chance of working. Anyway, the bottom line from anyone selling these systems is that, if they really worked, then why share the secret? Surely you’d be off to clean out the casinos every day? You can try any system you like at the craps table as the casino already know it will not work.

Why Craps Players Lose Money: Trying to Control the Dice

The whole subject of dice control is enough to make your head spin. Most people who are familiar with the casino game of craps would have heard of this phenomenon. We should point out that controlled shooting is very different from dice sliding. In craps, when you throw the dice, you should toss them. But some clever craps players used to more or less sliding them down the table so that the number or side of the dice that was upwards in the hand would remain so during the “throw”. It’s a highly illegal move. Now, on the other hand, dice control is being able to control the dice during a regular throw. Go on the internet and you’ll find literally hundreds of courses and books about this art.

A Myth For Suckers

The problem here is that if dice control were a real thing, then these schemes wouldn’t be trying to make money selling suckers a book, but would be raking it in at the casino craps table. The thing that can help make this method appear more legitimate is that you only need to alter the results of just a few throws in order to make the game turn a profit for you. But, it goes without saying, that the casino is going to be vigilant about anything that might put a dent in their profits. We don’t recommend you try this as a jackpot winning strategy. Simple because if this was a working system, then you can bet your last dollar that they’d have clamped down on the practice.

For example, casinos are very wary of how craps players throw the dice and are keeping an eye on anyone who tries to slide it. But if you really believe that such a thing as dice control is really possible, then why not try it. You have nothing to lose provided that you don’t mention your efforts to anyone. Just don’t start a course or write a book about it, and we’ll remain friends!

If you’re a beginner at craps, just stick to a couple of basic rules when you at the craps table, then you’ll reduce the chances of running down your bankroll too quickly. Remember that there are only two wagers worth making, so ignore everything else. And don’t get yourself suckered into the shady world of dice control. Bear in mind that there are no gambling systems that work, least of all, these hare-brained schemes about controlling the spin of the dice when you toss it down the table.